Dan was gone for the day and the city was hot. I decided that it had been a while since I’d seen the Alps so I hoped on the BMW and headed south. Of course I didn’t take into account that the thunderstorms that were forecasted to plague Dan might also interfere with my own plans. It is easy to forget that the weather that one experiences out their front door isn’t the same weather somewhere else. Therefore, I had a t-shirt on under my mesh jacket and no back up layers. I was looking forward to the cold; bring it on!

In order to save time, I booked it south on the A3/A2 until I got all the way to Lucerne. I really had no idea of where I was going when I decided to head over Sustenpass (my favorite!). As I followed the road further south, past the Sarnensee, I saw not mountains, but clouds. Lots of clouds.

This was great, but it also made me wonder what I’d find if I went up there. Rain? Probably. A view? Probably not. I admit that a part of me wanted to hit the mountains to enjoy the view. I was already riding through cooler temperatures, so half of my goal for the day was satisfied. I could satisfy the other half in other ways.

It had been probably over a year since I’d been up this way and I gave in to the temptation to stop at the overlook above the Lugernsee. It is sort of a cliché, and I have so many photos from there, but it is a fantastic view so I stopped again.

After working my way passed the ogling crowds to get my photo, I left The View behind and kept heading towards Sustenpass, even though I was feeling less and less drawn to ride up it. Instead, I decided to stop in the town of Meiringen to take a break and enjoy the day. As I rode through the quiet town (since nothing is open on Sundays, there isn’t much reason for people to be in town), I admired the waterfalls that lined the wide valley. Ah! Reichenbach Falls! I had ridden by them so many times in the last years, but today I would go see them up close.

I parked the bike, bought my ticket to the top and took my seat in the wooden car. Originally built in 1899, the line was rebuilt 100 years later, but followed the original design. It was a smooth trip to the top, climbing the 60% grade with ease.

The single track has a wide section for passing

Looking down at the lower falls from the track

As soon as I got off the funicular I stepped into a blissfully cool and damp mist. This is what I needed! There wasn’t much to see: a brown cliff of stone, a long fall of water and a cute little Sherlock cutout. And less than half a dozen people – I had it all to myself. Not that there was much to have. A short video I took gives more depth – and sound – to the waterfall. 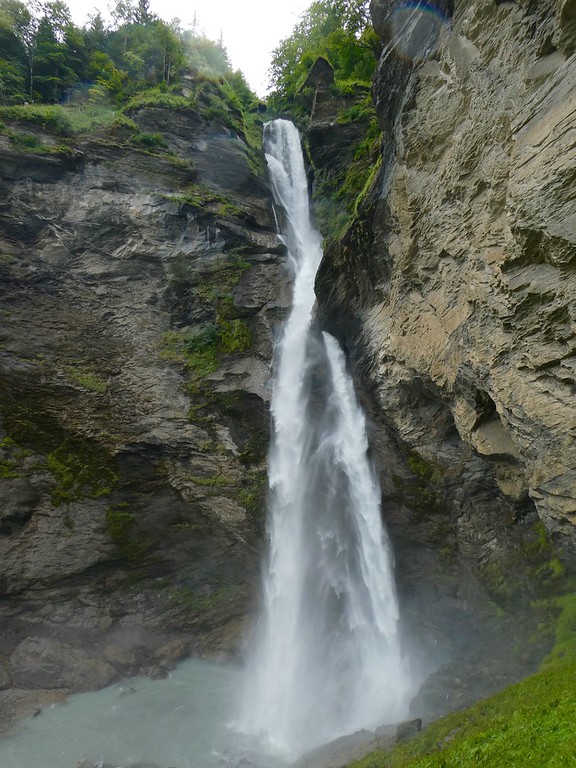 I have a case to solve! 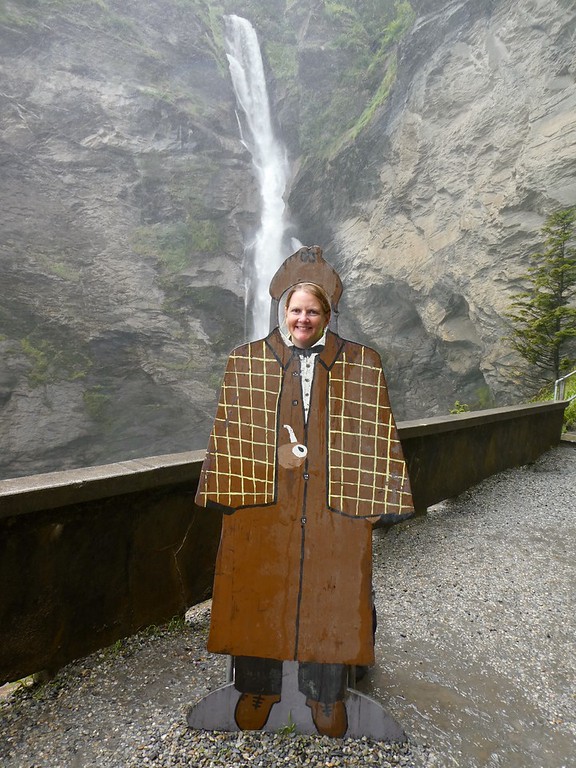 The view from the falls

While it was delightful at the falls, there also wasn’t much to occupy myself considering I wasn’t planning on hiking further up (as most others seemed to be doing). While I had no detailed knowledge of Arthur Conan Doyle’s “The Final Problem“, where Sherlock Holmes is believed to have died in a fall, I did know that this site was famous for being associated with Sherlock Holmes. I let the mist fall on my face one more time and then went inside to get on the funicular for the ride back down.

Waiting for the ride back down

I returned to Meiringen and rode down the silent streets. I was going to head home; it was just a matter of which roads I took to get there.

More waterfalls in the distance 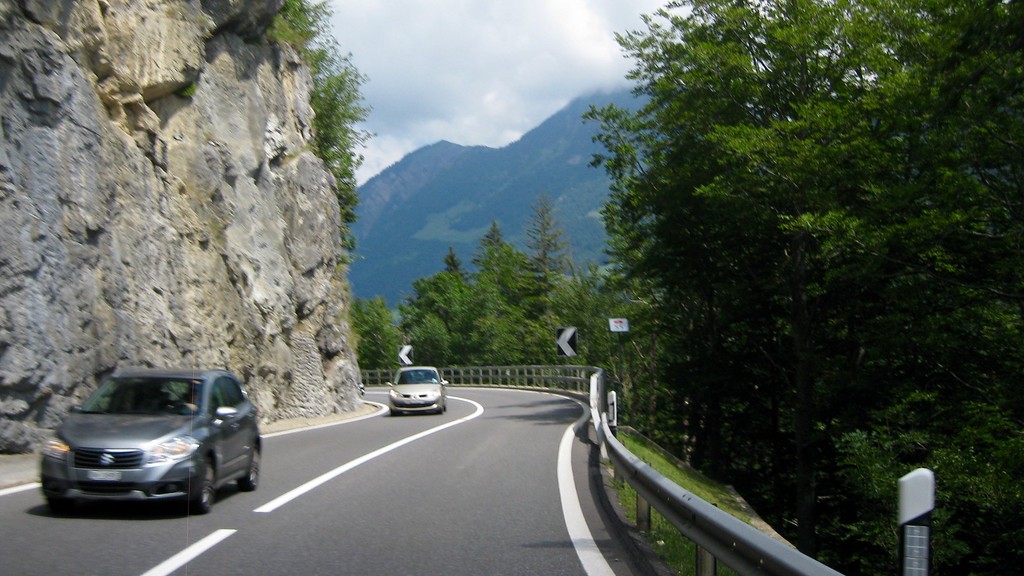 In the little crossroads of Brünigpass there is an antique store. It is a large place and it has caught my eye numerous times, but I was either with other people or it looked closed. In fact, it looked closed today too, but then I saw someone inside. I impulsively pulled over and went in.

It was fascinating. Floor to ceiling and multiple rooms, this place was packed with the detritus of years of collections from what appeared to be every barn in the valley – and a few valleys nearby as well. There were the cliché farm implements, mounted antlers, cow bells, paintings, dishes and accordions, but also more exotic things, like a cello and wooden carvings from Africa. It was a candy store for me! I found a couple of things I could fit on the bike, made my purchases and was soon back on the road. 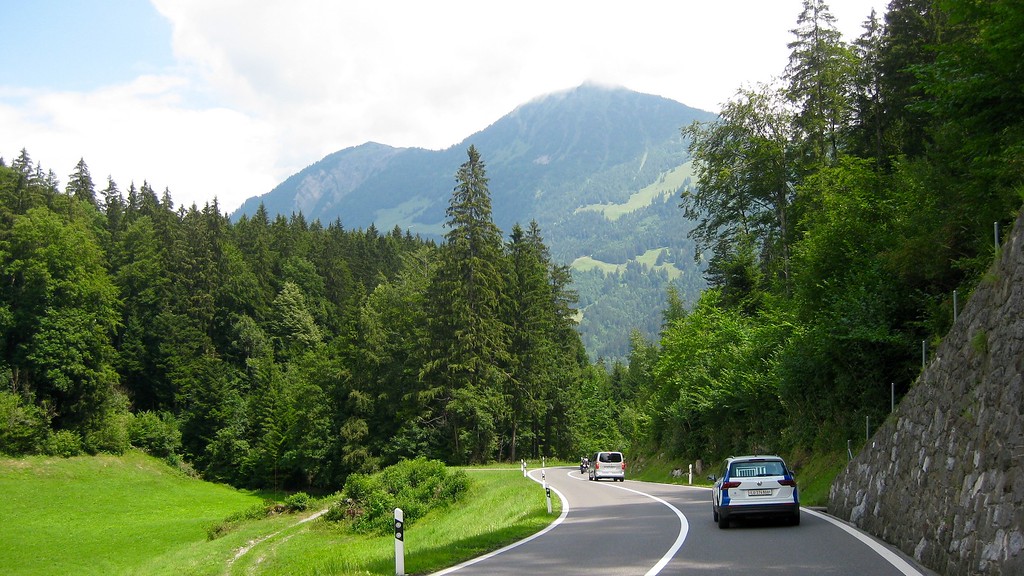 And that viewpoint of Lugernsee from this morning? Now I found myself at a little point of land halfway down the lake. The view is not quite as impressive, but it is still a nice view.

Oh, but what’s that in the red circle? 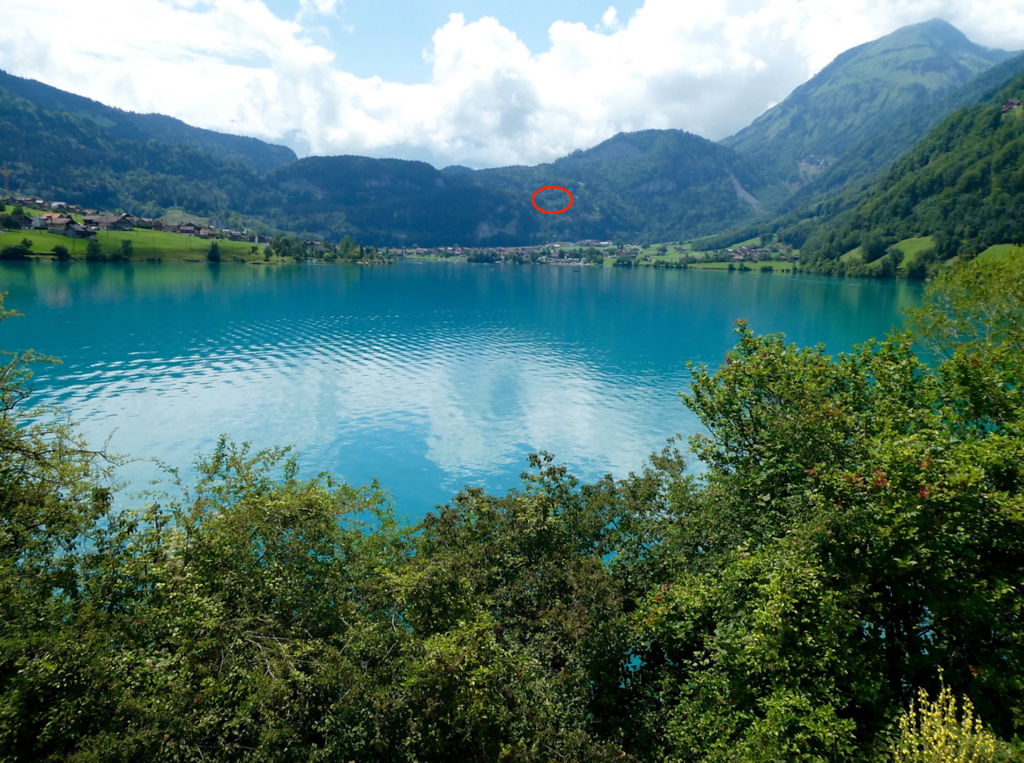 Its the lookout from this morning!

The zoom on this camera never ceases to amaze me.

Looking further down the lake

Unwilling to take the motorway all the way back to Basel, I headed over to Panoramastrasse. I don’t hear many people talk about this little pass, and I’m glad for it. The roads are narrow, the views and fantastic and the corners are fun. But first I had to cross the valley to get there. 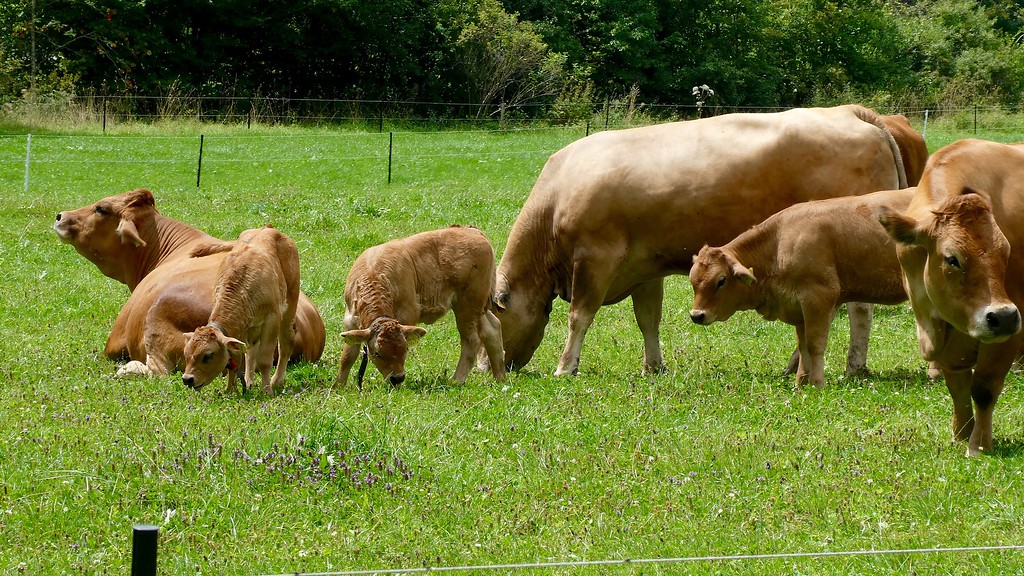 Free-range chickens with tents for shade from the sun 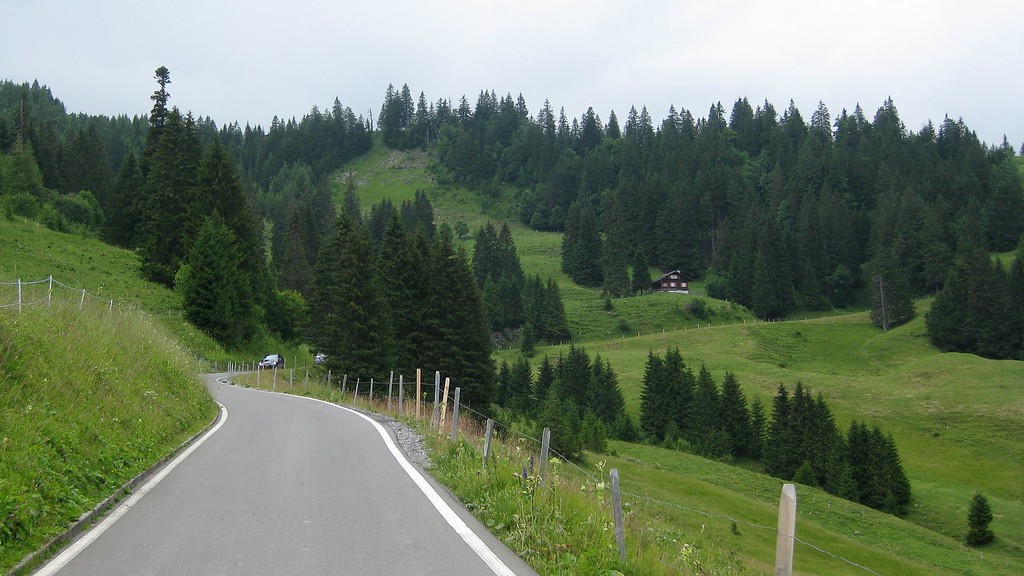 A moo with a view

It was delightfully cool here – I didn’t want to leave

I sat here for a while, waiting for these guys to figure out how to get around each other

I saw this guy land in the tree, otherwise I never would have seen him

The GPS was set to “curvy roads” 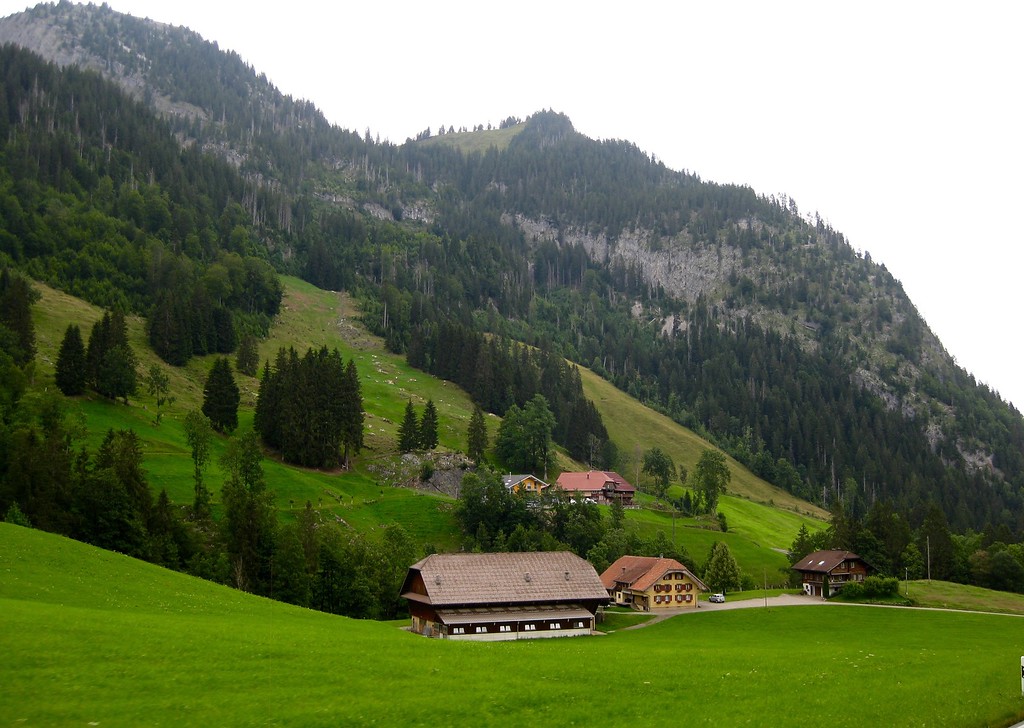 Which lead me to previously unseen roads – and art 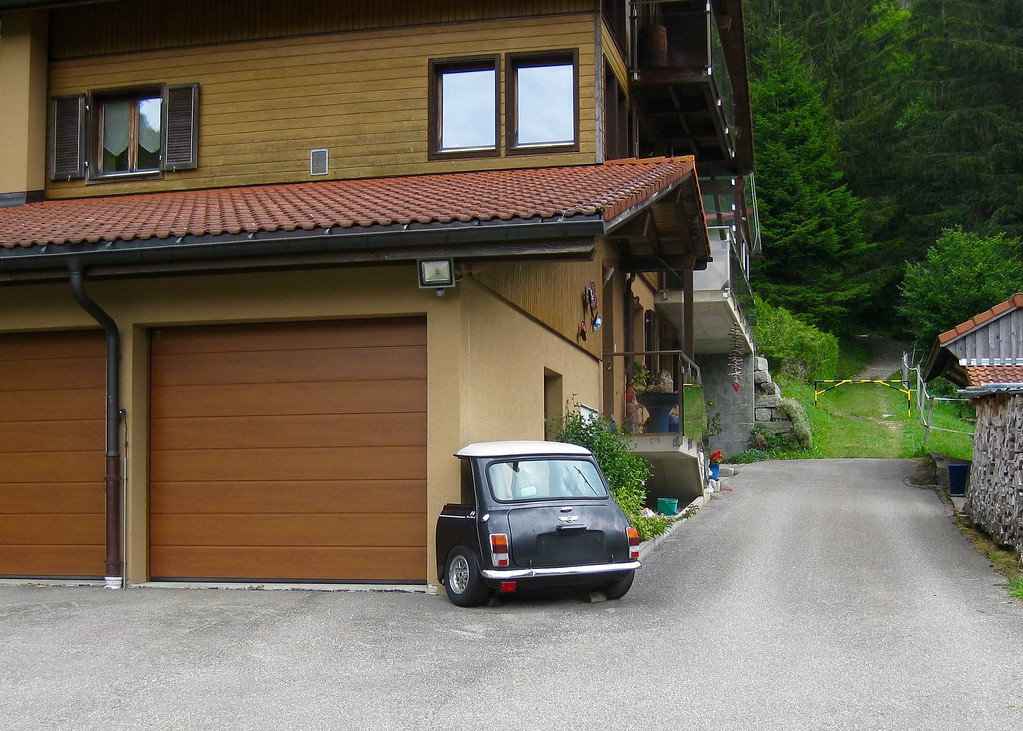 Last bit of curves before I leave behind Panoramastrasse

And then some new country roads!

I passed the sign for Cherries before my brain comprehended what it was. Cherry season had been fantastic this year, but it was over in Baselland. My mind did some mental gymnastics after seeing the sign: The season must be over, so the farmer probably just didn’t bring in his sign yet. But we were at a higher elevation, so there could still be cherries. And Swiss farmers are usually pretty good about keeping their stuff up-to-date. And it was a beautiful day; it wouldn’t hurt to go look.

So I turned around and followed the signs. 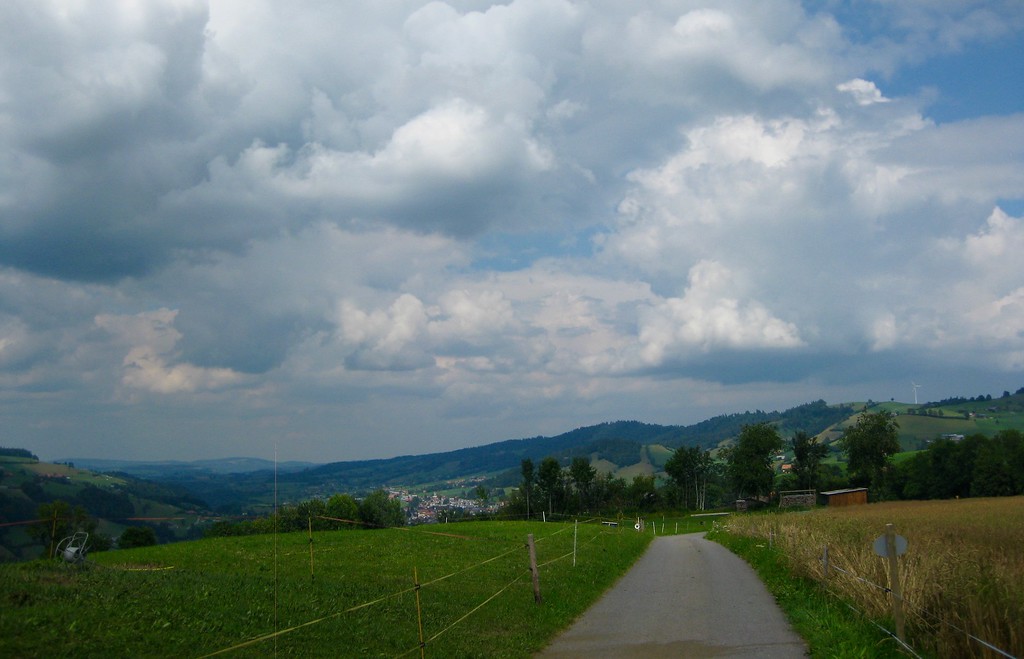 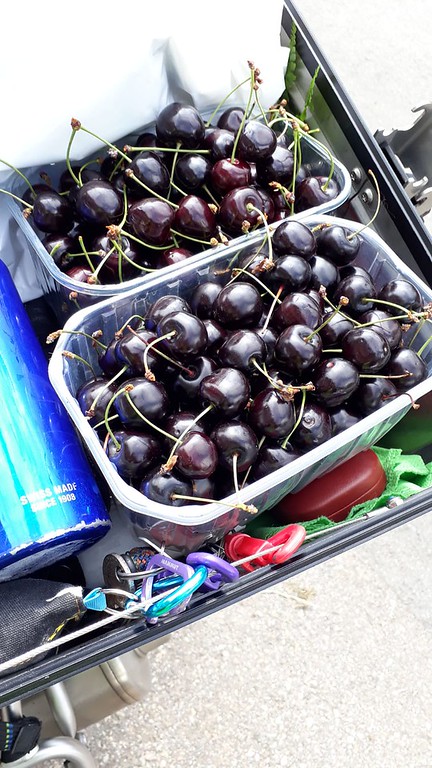 The farmer said that he’d have about ten more days of cherries, and then his season would be over. I was glad to get the few that I did!

From here it was a little more meandering and then I hit the motorway for the rest of the ride home. 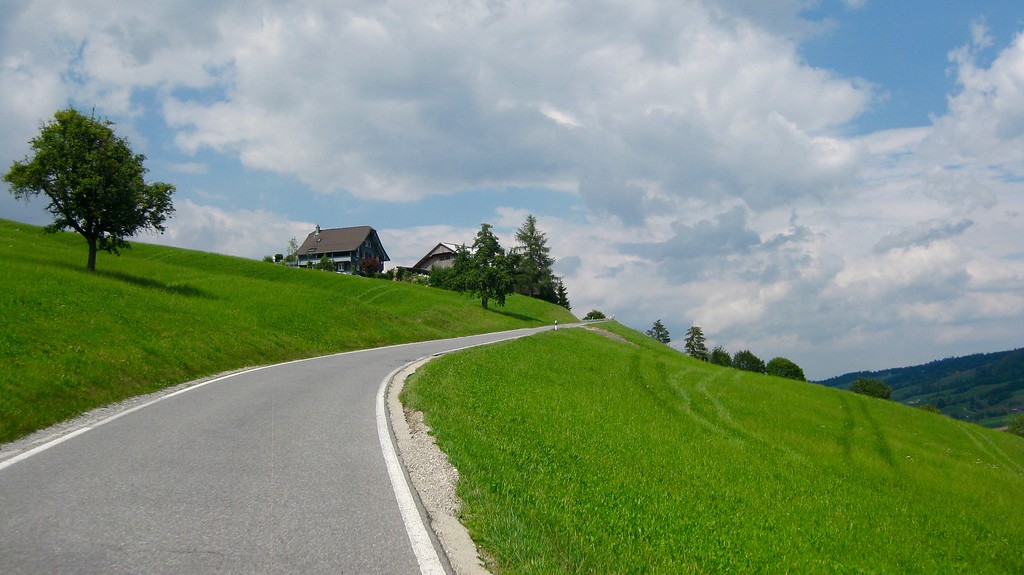