Fun with my cousins

We had decided to get out into the mountains and do some hiking and see some scenery. I also decided that we should take a ride on Switzerland’s steepest funicular that just opened less than a year ago. I saw a few videos on how it worked and was excited to see it for myself. Plus, it would save a lot of uphill hiking, and that’s always a big plus in my book.

After gathering everyone together relatively early, we caught the train from Basel to Lucerne and then transferred to a second train that took us to the little town of Schwyz. Everything I had found on the internet said that the new funicular ran from Schwyz, but after a brief wander around the train station, I could not find any indication of where or how. I finally gave up and went into the ticket office and asked. And I’m glad I did: it was still a twenty minute bus ride away!

Construction was still going on at the base of the new funicular, with more parking being built and the grounds cleaned up. But the visitor’s center was complete and we went in to wait for the next departure for the top. Based on the sign, the set of “barrels” depart every 20 or so minutes so we didn’t have to wait long. And since each barrel can hold up to 34 people, there was plenty of room for us.

Space inside the barrel 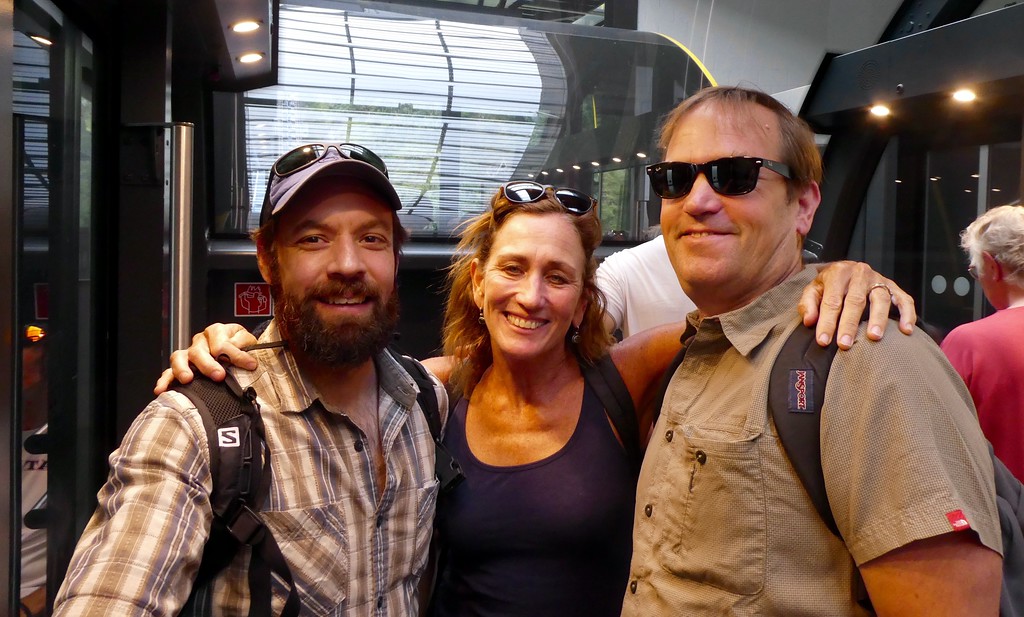 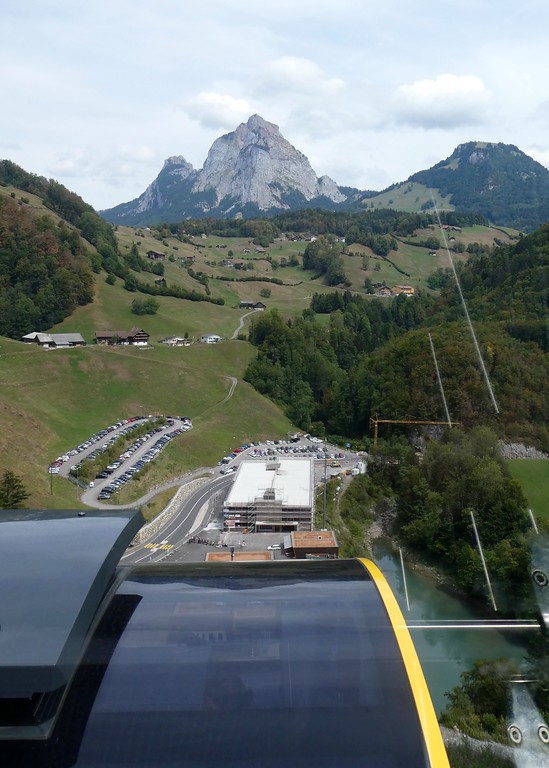 The ride up to the top was fast, smooth and quiet; just what I expect from Swiss engineering. It is a true funicular, with a single track that doubles midway for the two sets of cars to pass each other. The website says that it is a three to five minute ride and I must say that it went quickly. The views to the north were fantastic, but there wasn’t a way to look up the mountain, which is too bad. Climbing a grade of 110% isn’t something one does every day. 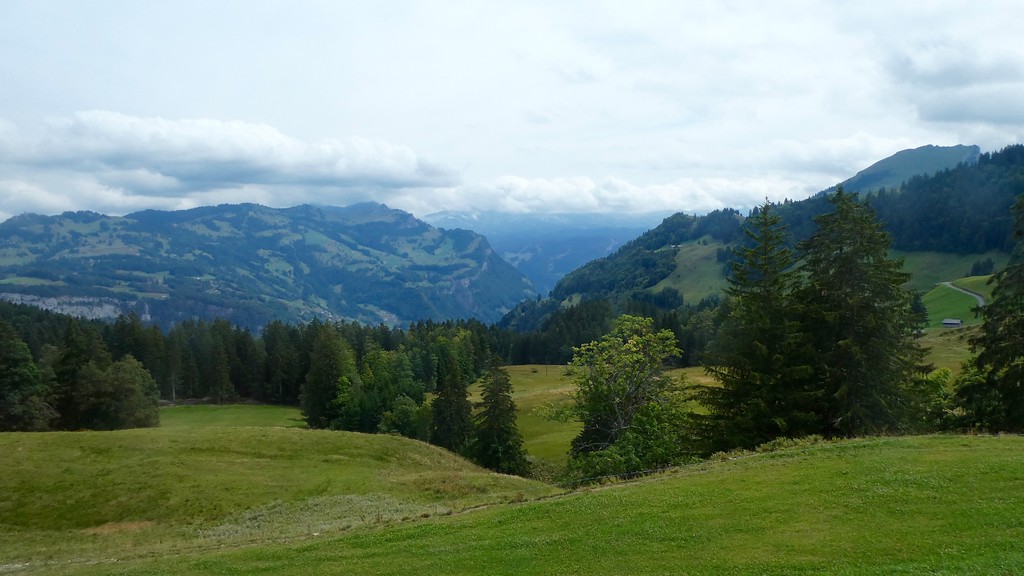 At the top of the funicular is the village of Stoos. With a population of about 100 people, and completely car-free, it was a sleepy little place. I suspect that the winter ski season tells a different story. Our little troupe of four huddled around the map of the area and looked over our options. I had suggested a panoramic hike, and now that I could see the lay of the land, I was all too happy to lobby for taking the chairlift further up to the start of the trail. We were in a small green bowl, surrounded by lush mountains and grazing cows. The panoramic views that were promised would start much further up.

Switzerland is all about the money (although to be fair, it isn’t cheap to build the infrastructure that we are using), so after buying another ticket for the chairlift we were soon being whisked up and over those peacefully grazing cows, to the Klingenstock station at the top.

Chairlifts are so much easier than hiking!

At the top I was met with blissfully cool air. After suffering with temperatures in the mid-30s (Celcius), it was a relief to stand in a cool 20° breeze. This was a definite benefit to coming to the mountains. After a short picnic lunch with a world-class view, we started off on our hike, following the ridge line to the Fronalpstock chairlift station four and a half kilometers away.

And what a hike it was! To the right the land sloped gently away, a mat of green grass and the village of Stoos nestled among the hills. But to the left there was…nothing. Far below the trail was yet another green valley, with tiny homes sitting in their fields of green and surrounded by thick dark forests. Above it all were stony cliff faces. The trail itself was often so step that steps had been put into place. As we followed it around the various bends, a glimmer of blue became evident: Vierwaldstättersee.

Living up to its name as a ridge trail

Green field in the middle of the photo, on the far side of the valley – let’s see what’s going on over there 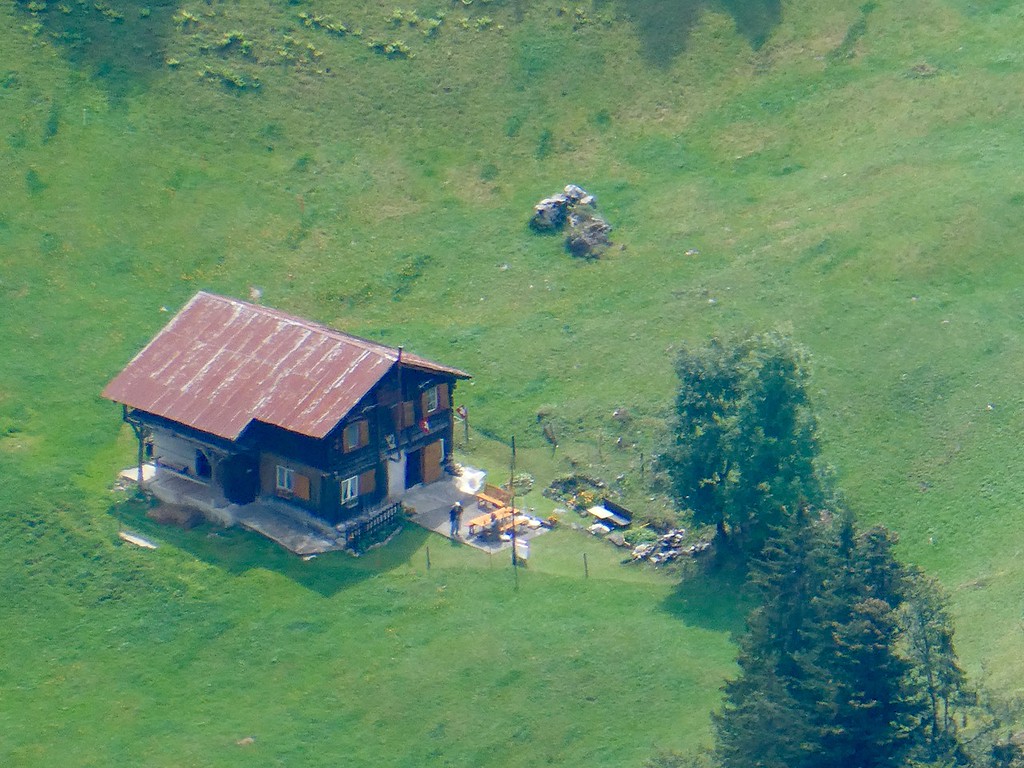 And yes, someone really had mowed that hillside

Picnic site at the top of the world

The village of Stoos

Lonely farmhouse – because Stoos must be too big

What goes down…must go up

The ferry docking at Sisikon

My stamina flagged heavily coming up the last major hill and I admit that I wasn’t too keen on taking photos by then. It was enough to focus on putting one foot in front of the other. Dan was nowhere to be seen (surprise!) but at least my cousins waited for me.

Flüelen in the distance at the far end of the lake

Seeli, the little lake barely visible above the opposite shore

Swiss cows, with Grosser Mythen in the background

The restaurant at Fronalpstock

We took another break at Fronalpstock, enjoying the view, the exertions of the hike, and the remainder of the bottle of wine my cousin had packed the entire way. It had been a good day and now it was time to head home.

On the way down to Stoos 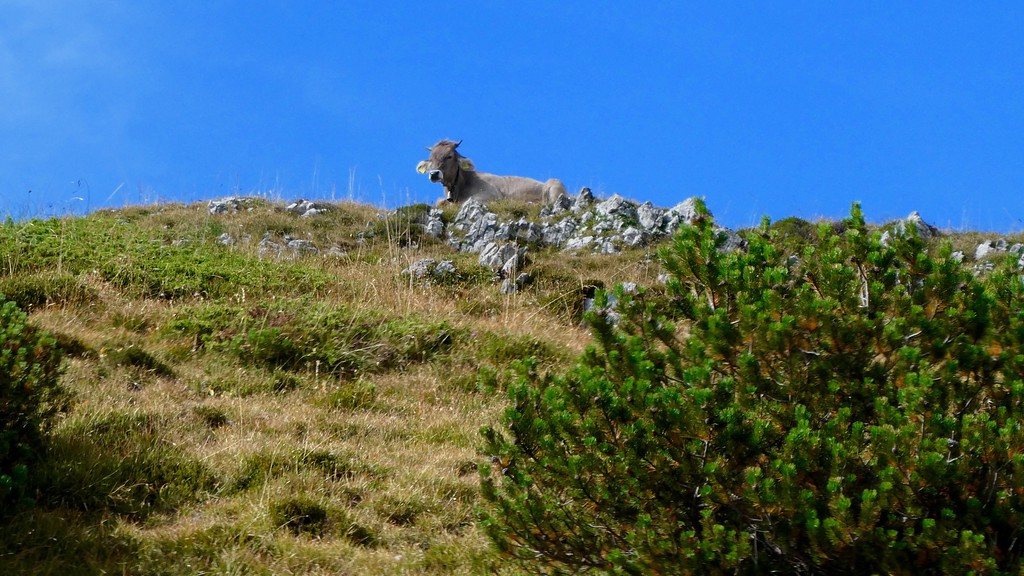 Side view of the funicular

The return train ride home was good and we rewarded ourselves with a hearty fondue. It was technically too warm for fondue, but hey, how often do your cousins get to have real fondue while overlooking your medieval city?