My newly licensed friend Mac invited me along for a day ride to Titisee. Her brother Micah was visiting and he planned to rent Harley’s new electric motorcycle, the Livewire. It had been years since I’d been riding in Germany and I was curious about this new motorcycle, so I agreed to come along.

I met them at the Harley dealership at 10 am, where they had just arrived and hadn’t yet started the rental process. The documentation was eventually sorted out and one of the staff gave a somewhat lengthy and enthusiastic demonstration of the bike’s features. The key points were the power modes (stay away from “Sport”!) and the range (about 220 km). Overall, the bike looked nice. I was curious to hear Micah’s feedback on the bike. After all, electric motorcycles are the future and I myself would love to have one someday. 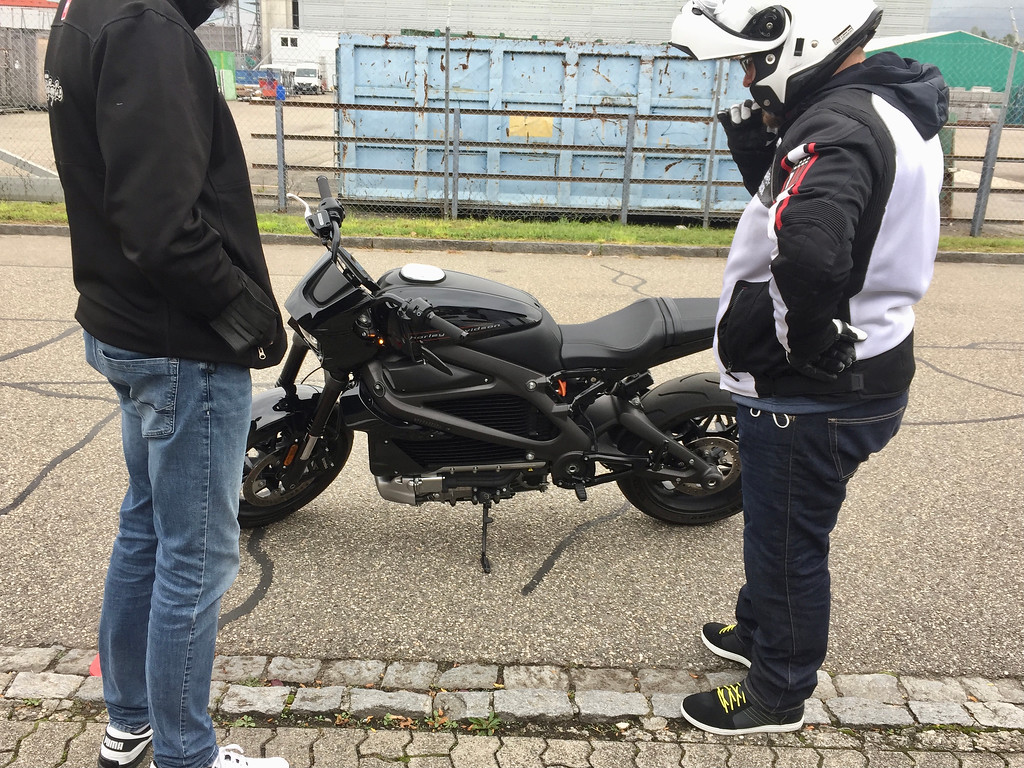 And then we were on our way! Usually I lead our rides, but today was all about Mac and Micah. Mac said that she had a route planned and I mentioned that I would just follow along at the back, letting her take the reins completely. She started off on the wrong foot when she couldn’t update the route in her GPS to add some waypoints. This meant that we spent the first hour slogging directly through the city and its neighborhoods, instead of zipping around it for what should have been a 30 minute ride. 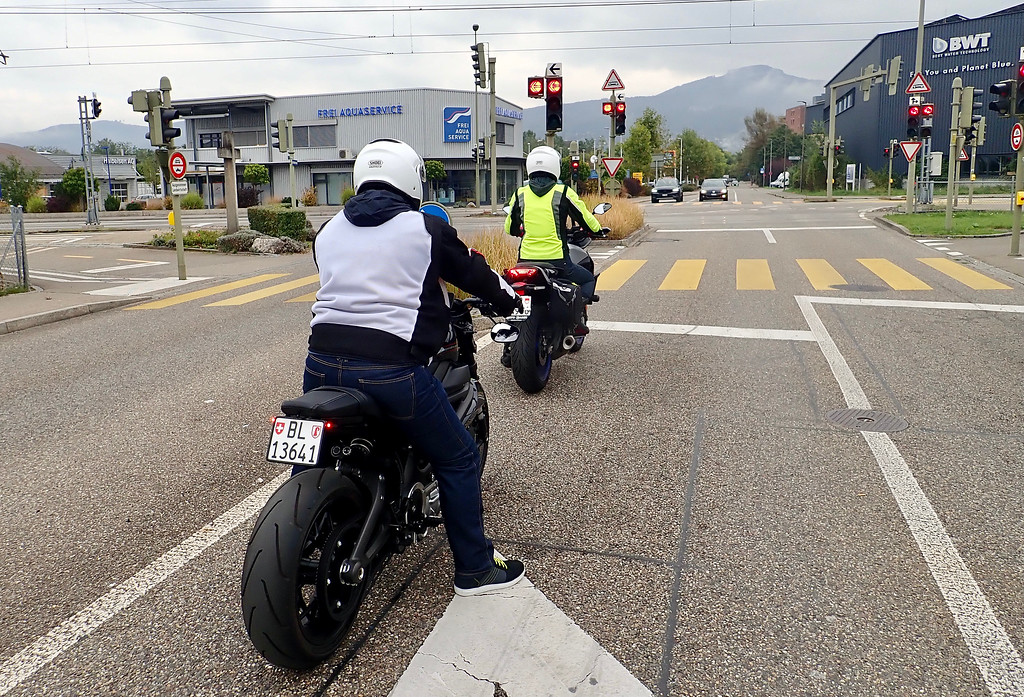 But eventually we broke free of the city and were enjoying the beauty of the southern Black Forest. It was a glorious albeit chilly morning, but the sunshine shone brilliantly and the leaves were just showing a hit of autumn colors.

Mac took us directly to the main parking area in Titisee. The plan was to leave Micah’s bike charging while we enjoyed our lunch. Unfortunately, we didn’t see any charging points in the parking area, so we parked the bikes in the motorcycle area and took off on foot to see if perhaps we missed in on the way in. Nope. The two of them studied their phones, looking for charging points. Micah said that he found one on the other side of the rail station. We went back to the bikes and rode the loop to get there – only to end up right where we started: Micah had missed the turn. So we rode around again and this time found two charging points – and two cars using them.

As we sat there discussing our options, a member of the local police force approached us, giving us a very disapproving look. It was funny to see her attitude change when she learned that one of the motorcycles was electric: she suddenly became excited and curious – and helpful. Unfortunately she couldn’t actually help us, but at least she tried. We gave up on the charge and focusing on food. We parked the bikes where we had originally and made the short walk through the touristy village of Titisee.

It is a small place and we quickly settled on a spot for lunch (Restaurant Seeblick) where I enjoyed a tasty burger. 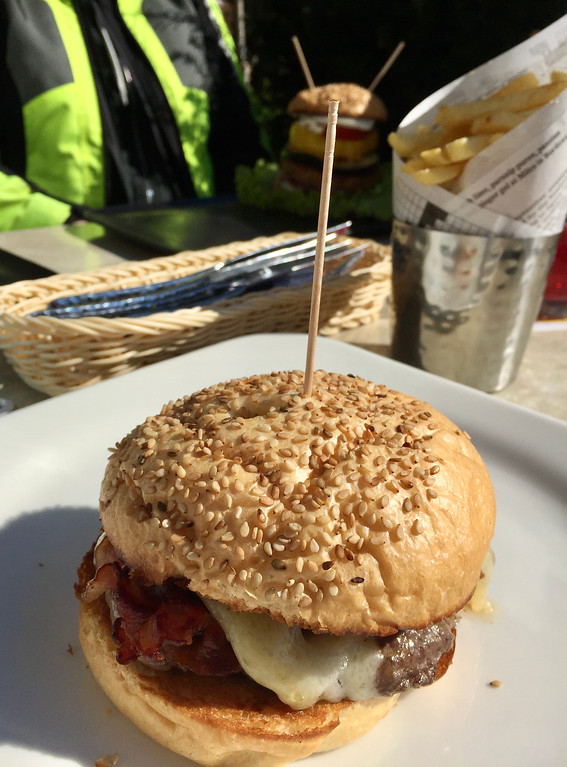 After lunch we sent Micah off to investigate a couple of charging point options he saw on his phone while we went down to the lakeside with some ice cream. It really was a lovely day. 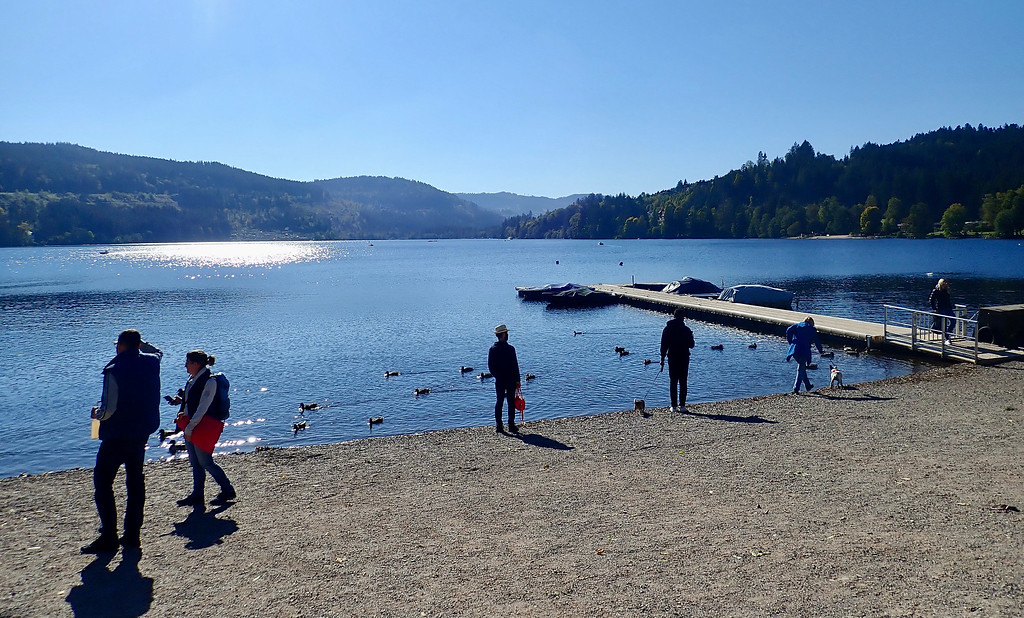 Mac got a text from Micah: he found a charging point! We got our on our bikes and rode to his location: Neustadt, over 4 kilometers away! 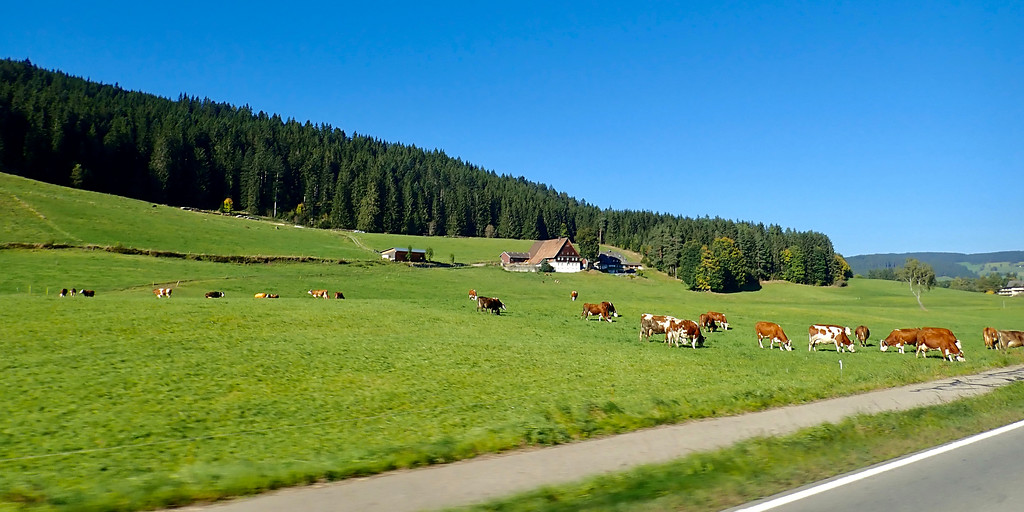 We arrived to find Micah fighting with the charging point. He had to download the app, and then couldn’t get the charger to actually start. Mac and I tried to help, but we couldn’t be sure of what needed to happen in order to start the bike charging. Finally we reached a point where it looked like it was charging, so we gave it five minutes to prove itself.

Five minutes later and nothing had changed. A connection hadn’t been made after all. The fact that the bike’s electronic dash kept timing out didn’t help, so it was hard to keep an eye on what was happening. The excitement of testing out an electric motorcycle had dissipated for everyone.

After a good half hour of fiddling with the charger, even trying to call the dealership (closed!) and googling for “how to”, we finally gave up. I had suggested that we continue to ride south to another charging point with either a different mechanism or someone near by who might be able to help. Micah still had 80+ kilometers on his charge, so we might as well get as close to “home” as possible. Mac gave me the address of a charging point 40 kilometers away, in the village of Zell im Wiesental. I had shifted to leading the group.

Zell’s charging point didn’t have any charging cables. Apparently we should have had our own. We all agreed that this was a failing point on the Harley, that it didn’t come with any cables.

Mac gave me another address, just 3.5 kilometers away in Hausen im Wiesental. This charging point was taken by an electric rental car, which meant that the cable was locked until the car was rented. They were actually considering renting the car just to unlock it, but I suggested that we just keep heading south to the next charging point.

We pushed this one to get into Lörrach, since then we’d be really close to Basel and it would be easier to make rescue arrangements “if necessary”. So 20 kilometers later we’re in Lörrach, but the charging point couldn’t be found. I suspect that it was behind the locked doors of the car dealership that the address led us to.

Just 2 kilometers down the road was another charging point. By now Micah had 10 kilometers left on his bike’s battery and the dealership was 20 kilometers away. Much to our surprise and relief, this charging point:
– was not occupied
– had a cable
– the connection fit his bike
– and it worked!

The bike only needed 10 kilometers’ worth of charge which the machine estimated would take 30 minutes. At this point I was more than ready to head home. To be honest, I was ready to head home after lunch but I wasn’t about to abandon them in their adventure. I made sure that the bike was really taking a charge and then I got on my own bike and said farewell, ready to park my bike back in my garage.

The entire experience left me really disappointed with the state of electric motorcycles and the supporting infrastructure. I love the idea of having an electric motorcycle, but only when it can do something close to what my current bike does – which is well over 500 kilometers on a single tank. And the infrastructure needs to be harmonized. Having so many variables is detrimental. Not to mention that the charging points we found could only really be found with the help of the app and a GPS. They were tucked away on tiny side streets in little villages, usually completely out of sight until you were upon it. The day that they are as prominent as standard gas stations will be a welcome one.

On the plus side, it was a beautiful day for a ride and nice to spend time with Friends on Motorcycles.