Dan has a friend who lives north of London and it was suggested that we meet up with him and his family in the town of St Albans. It sounded like a good excuse to catch up, as well as see a new area. It was a bit of an effort to get there: bus to the Underground, Underground to the train, the train to St Albans. But it was another beautiful day and it was nice to watch the countryside slip by the windows.

We arrived at St Albans and worked our way over to the Craft & Cleaver, our meeting point for lunch. We loitered outside for a bit when Aaron and his family showed up. We took our seats inside, ate some wonderful BBQ, and enjoyed a nice conversation.

We were among the first ones in the restaurant

Once lunch was over we went out to explore the town itself. St Alban is known for its Cathedral, and a long history that spans well beyond the Romans that marched through here. The Roman city of Verulamium, second only in size to ancient Londinium (London) in Roman Britain, developed around AD 50. Yeah, there’s just a little bit of history here…

The Clock Tower in the center of town 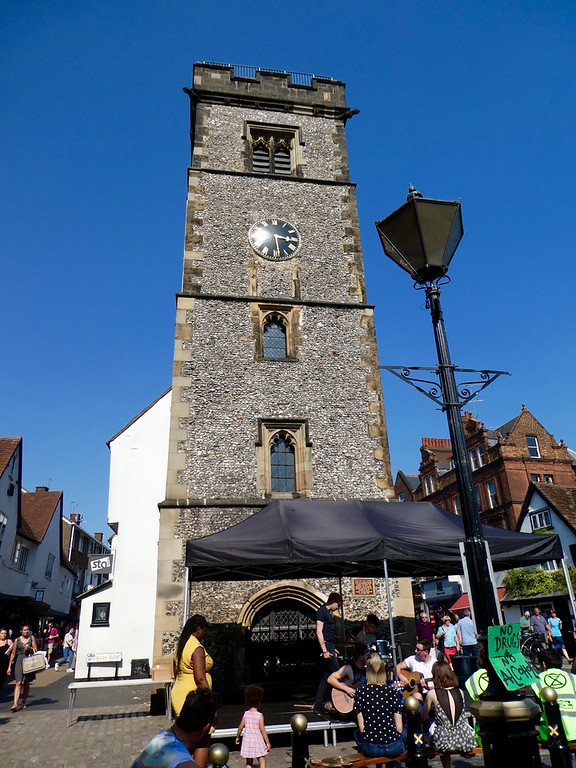 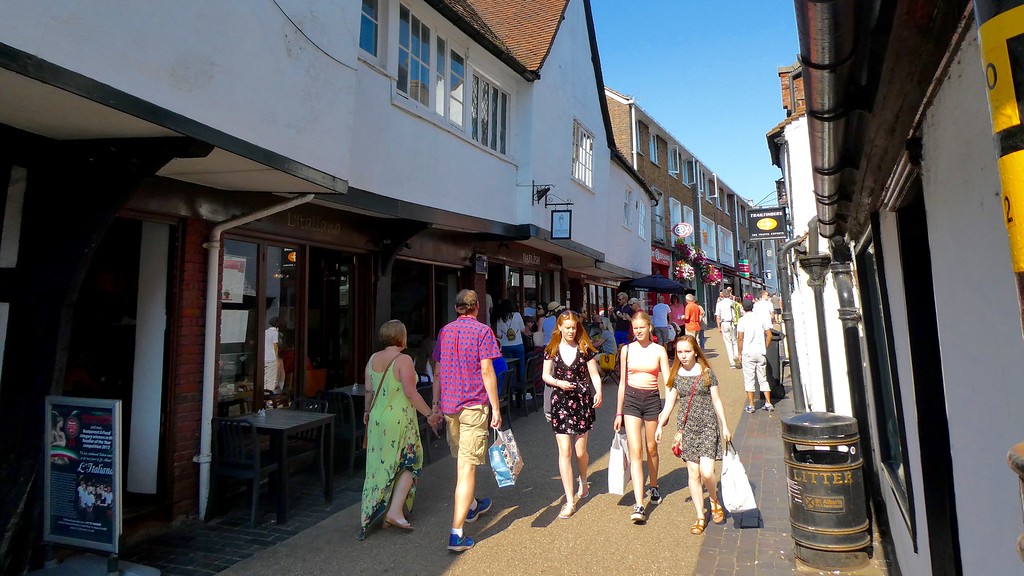 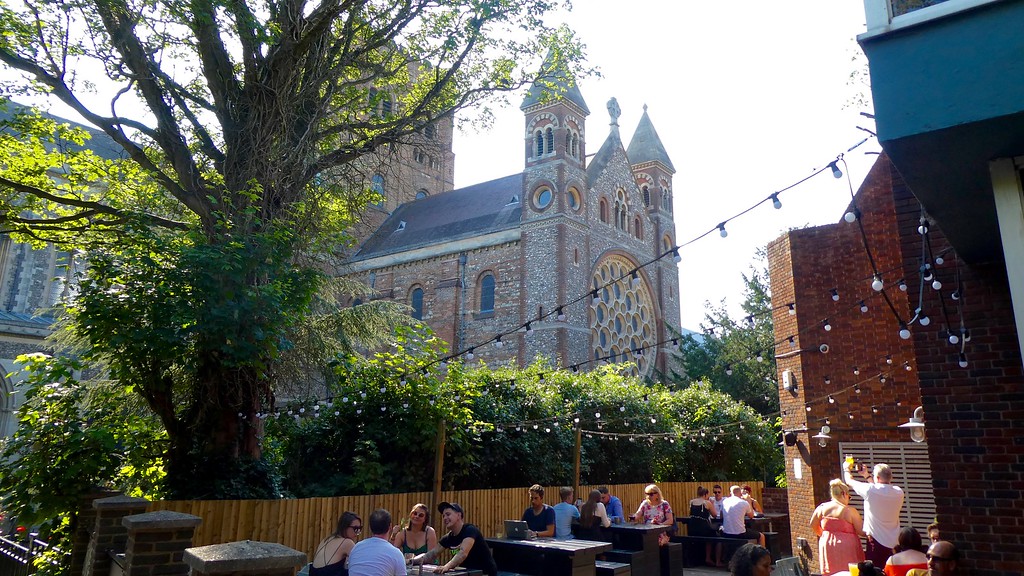 St Albans Cathedral (there is a lot of interesting information in this wiki link) started life as an Abbey until the 16th Century. But the building itself started around the 8th century, and went through a few different iterations throughout the centuries. An earthquake in 1250 cause the destruction of certain areas of the structure, but the tower remained standing and is now the oldest cathedral tower in Britain. I found out much too late that one can arrange a “Tower Tour“, which sounds like it would have been something I would have really enjoyed doing.

A most “interesting” overlap of styles 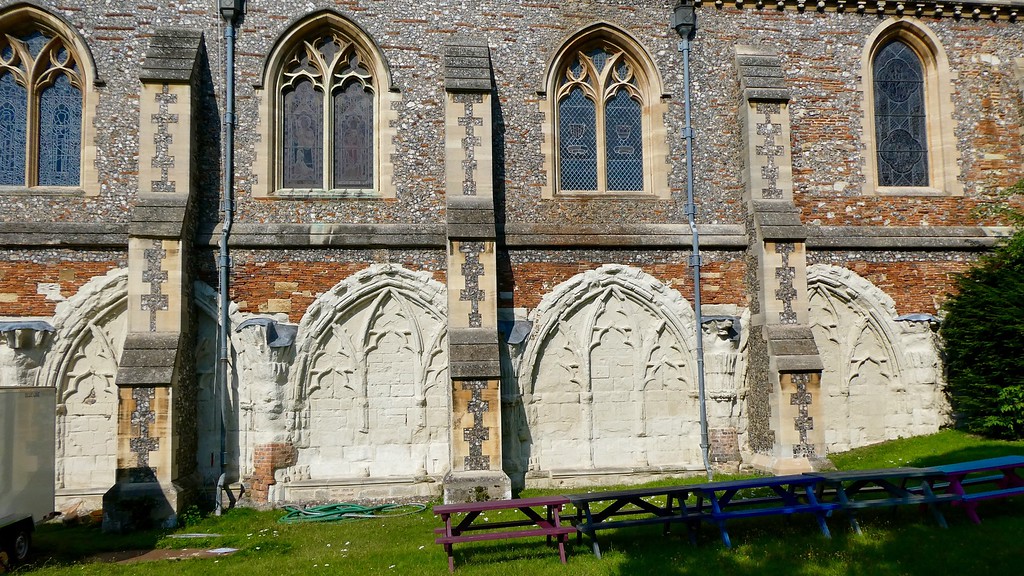 I love this tapestry – I should have captured more of it 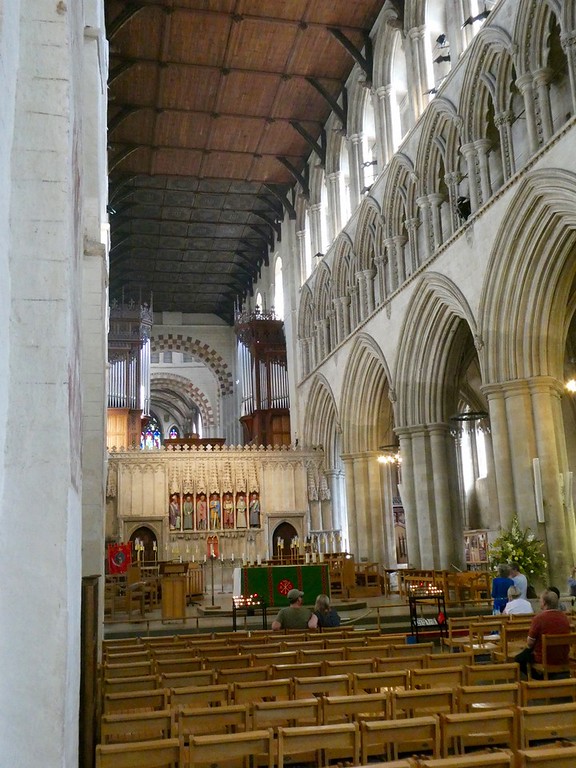 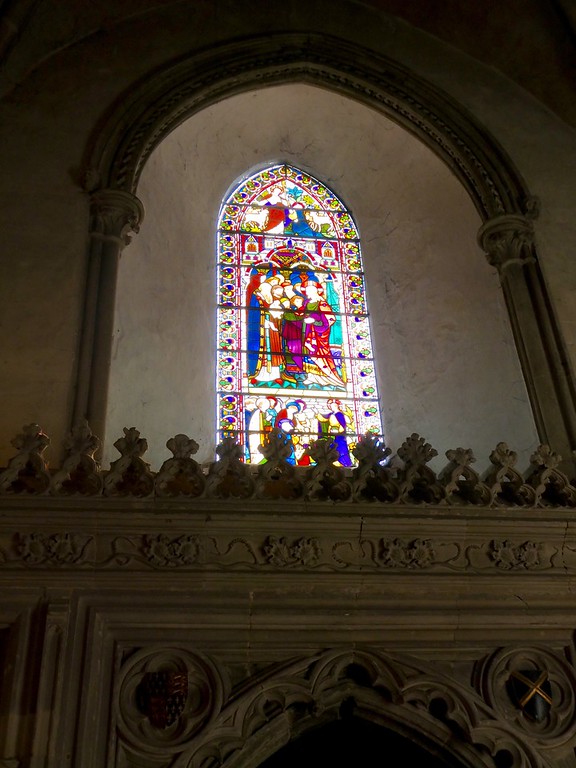 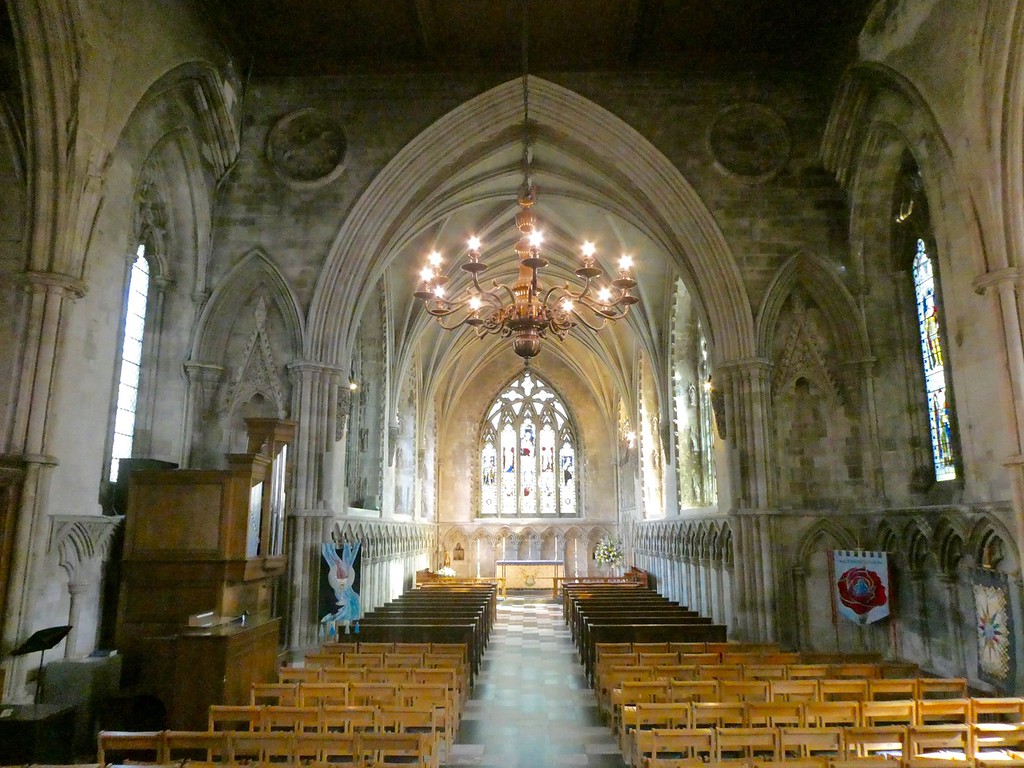 Ah, I do love a nicely-lit cathedral! 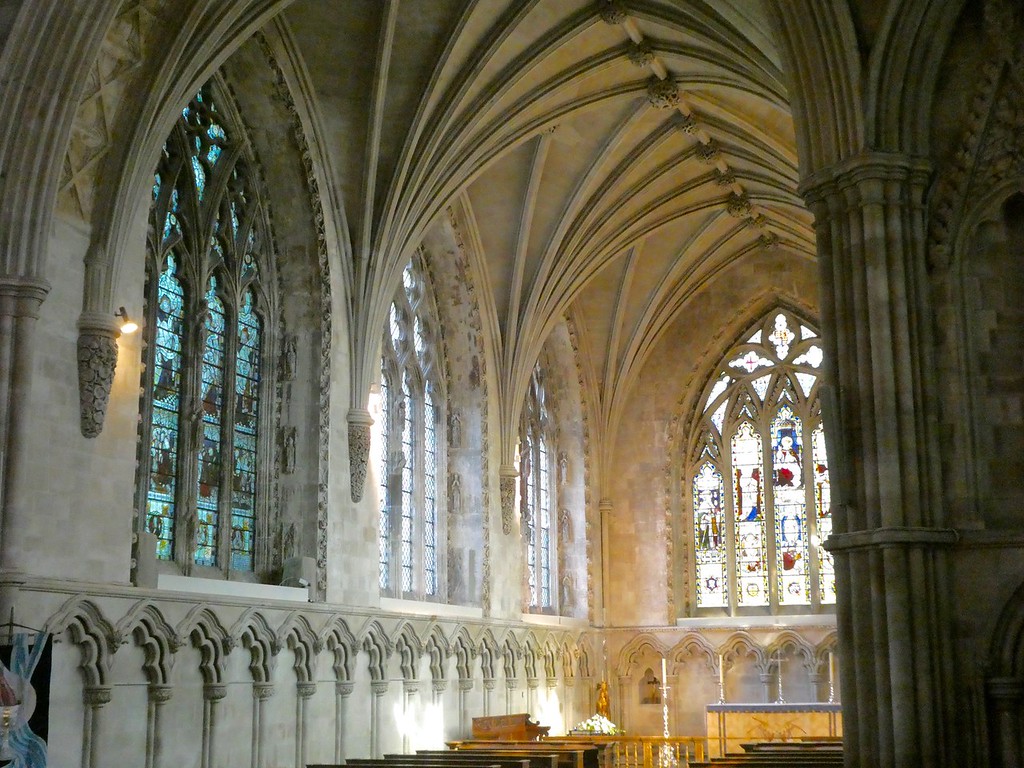 “In case of flood, your seat cushion acts as a floatation device”

After our personal tour of the cathedral and grounds, we walked back through town and went our separate ways. It had been a nice diversion in our London trip and it was good to finally meet the rest of Aaron’s family.

Funny thing is, the birds are on the inside of the netting

Taking the train back into London

Remember how I said that we averaged about 23 kilometers of walking per day? Well, today would be no different. We got back into London and thought “Hey! It is still early – let’s go walk around some more.” So we took a bus to a different neighborhood and started hitting the pavement again.

Saving the walls – and nothing else 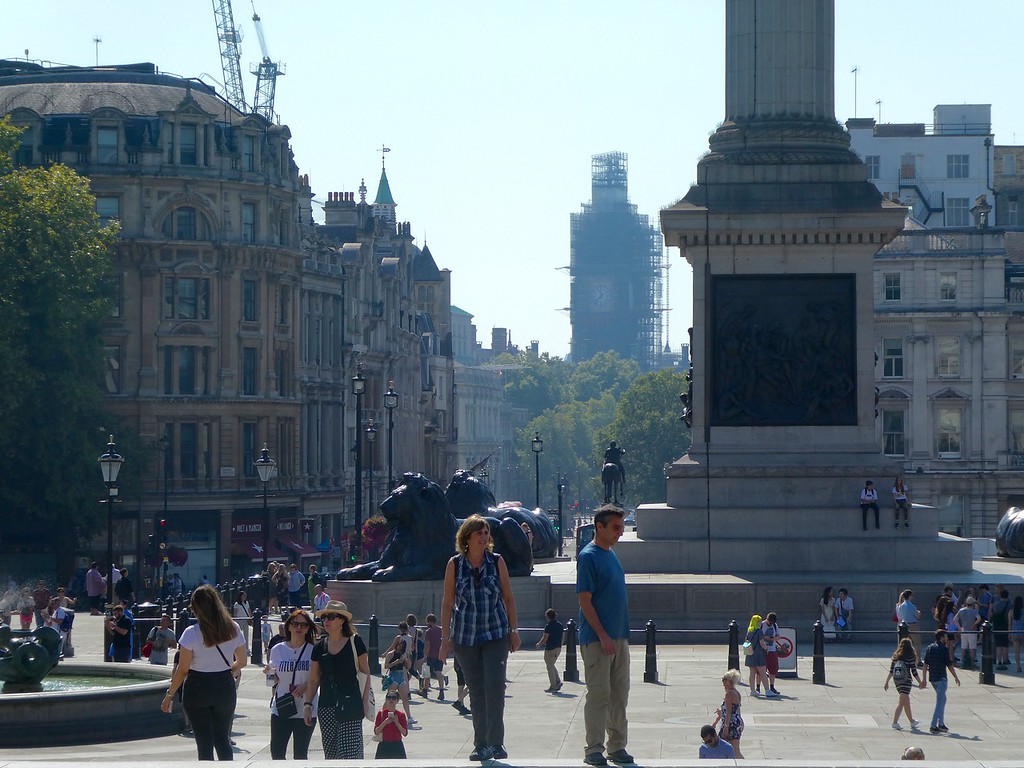 Dan and I have been to London a number of times now, and each time we vow to go to more museums. Usually we fail in this endeavour, but this trip was coming up aces! Not only had we visited the Natural History Museum, but now we were in the National Gallery! There was nothing that could stop us now!

Clearly we don’t take art very seriously. After meandering the various galleries we went back outside into the sunshine. There was other art to be found – some of it intentional and some of it just natural.

I told him to let sleeping dogs lie!

Does it get anymore “British” than this?

One of the old city gates 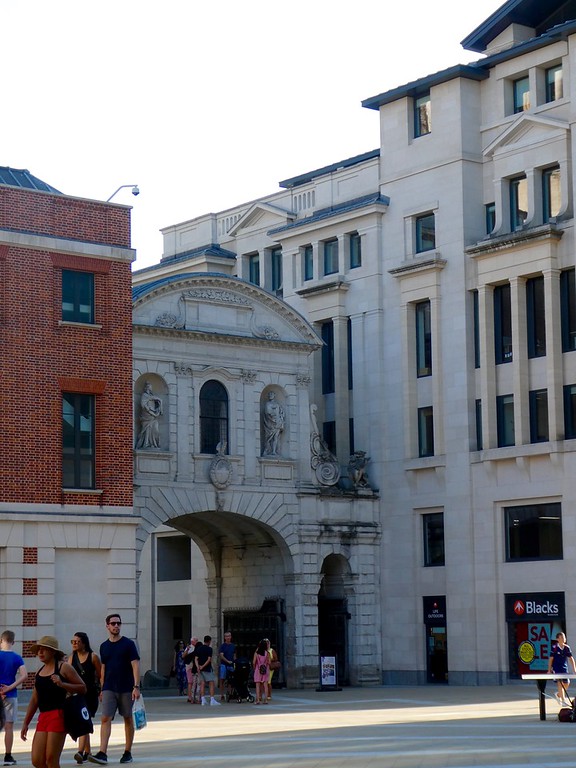 Fleet Street, I do believe

Dan had been doing some research on his phone. He had located a restaurant that had the absolute best meat pies in all of London – and it was “just a little further!”. Anyone who reads much of what I write should see warning flags all over that statement. Sure enough, the “just a little further!” was well over 40 minutes of brisk walking (keeping in mind that it was still ungodly hot in the city). We finally approached the restaurant, went inside and asked to be seated. The waitress looked surprised and informed us that they were closing in five minutes.

With a deadly look at Dan, we stayed long enough for something to drink before finding another restaurant “nearby” where we had a decent meal. I was done for the day, and we took the tube back to the hotel. At least we had the entertainment of seeing the costumed and/or drunk people coming back from the Nottinghill Carnival that was taking place that weekend. Someone asked if we had plans to do to it, but the thought of being around that many jostling people did not appeal to either of us.

Tomorrow was our last day in London for this trip; what to do?