* Three months have passed since this trip took place, so the details are a bit fuzzy

Dan had his eye on the Stanley Kubrick Exhibition that had been traveling around the world and when he saw that it was going to be at The Design Museum in London, he said to me “Let’s go to London!” I left all of the planning up to Dan and let him surprise me with whatever he found.

The first surprise was waking up at 4:30 am to catch our 7 am flight to the UK. We arrived at our hotel too early to check in, but they were nice enough to let us drop off our bag in the mean time. We changed into some “walking clothes” and headed out into the big world of UK. 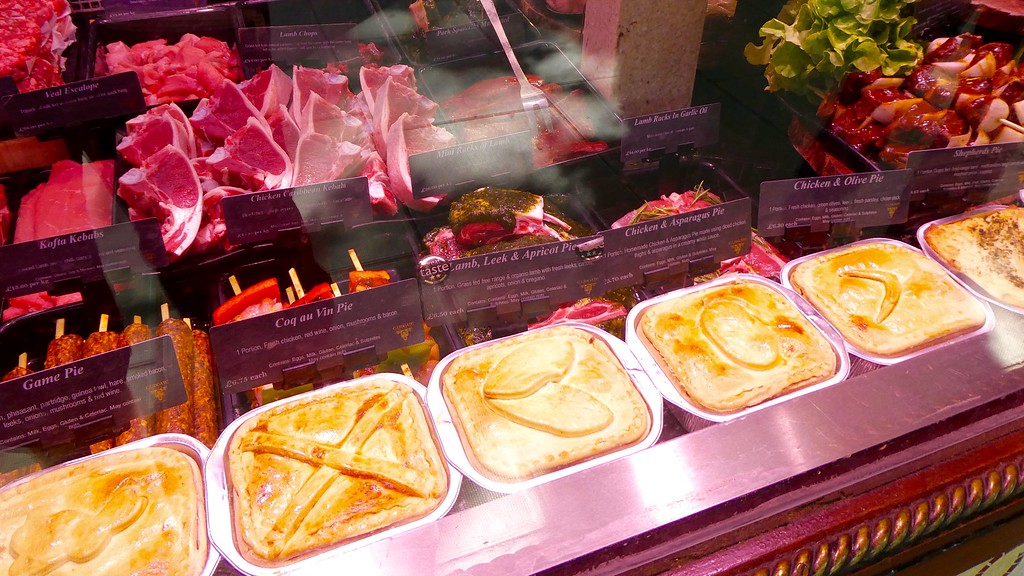 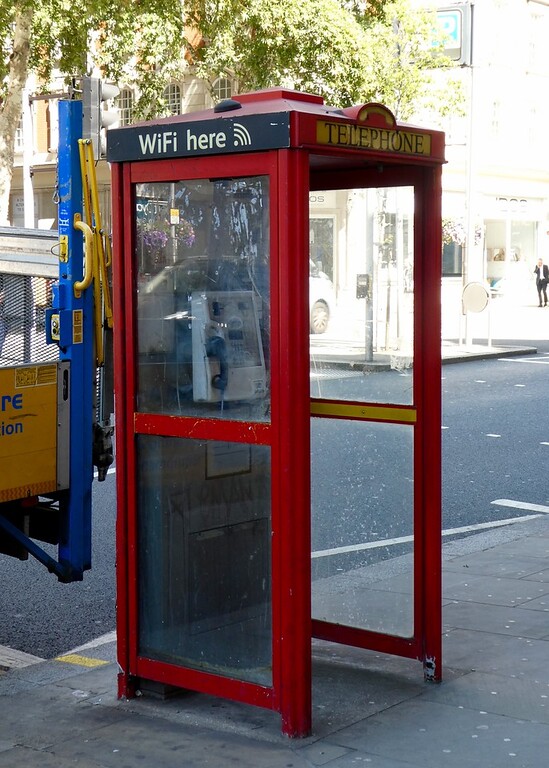 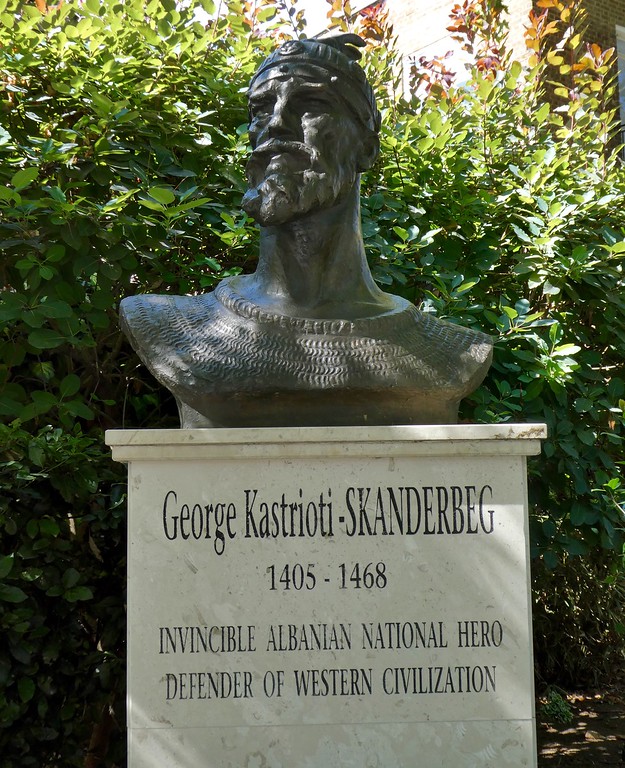 We ended up walking through Holland Park, Kensington, and Chelsea. These were neighborhoods that we hadn’t seen before and we took the time to wander the streets and check out the sights. Eventually, however, it was time that we could properly check into our hotel room and we turned around to head back.

Unfortunately for us, the Tube was hot and packed with riders. We made it two stops when the intercom announced that there would be a delay. And then a further delay. After twenty minutes, we finally agreed to leave the Underground and catch a bus. The first bus arrived but it was already packed; the second bus also filled up rapidly and we were finally able to get on the third bus.

They closed the station shortly after we left

Our hotel, the Kensington Suite Hotel. was very well located. And clean. But that is really about as far as I can go in praise of this place. The room was tiny, the windows overlooked a busy street, and the shower was so narrow I could barely turn around in it. But hey, for the price, the location was great!

Centrally located – that was the hotel’s best feature 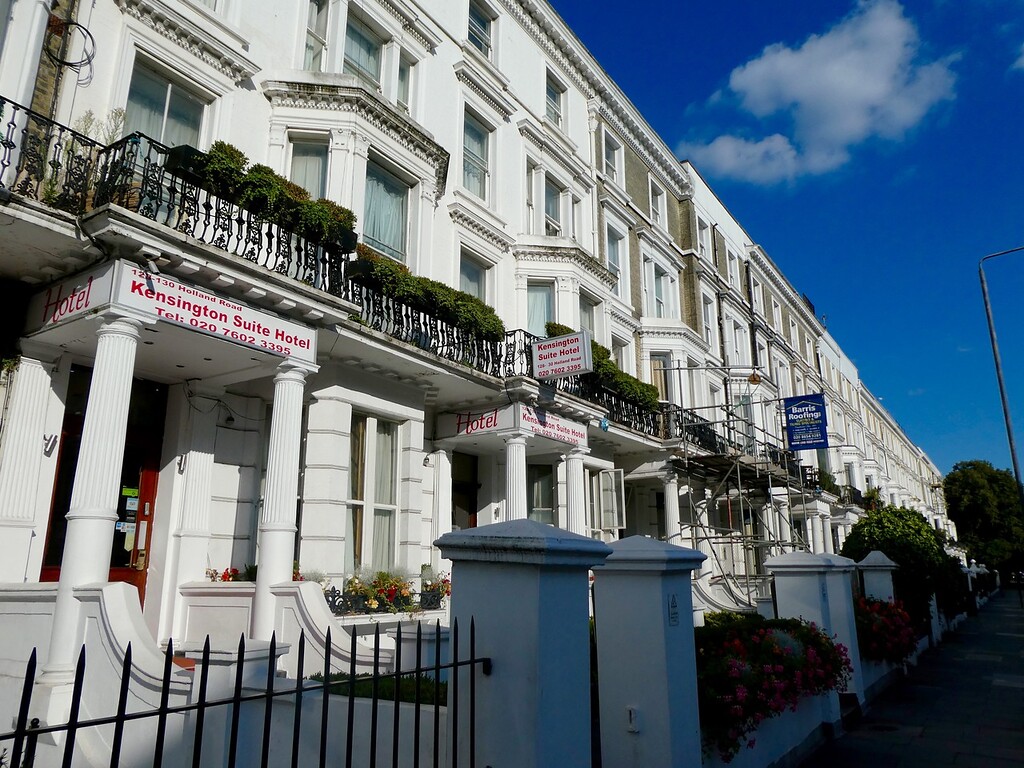 So much room in our room (not)

But we didn’t come to London for a hotel room. We had unpacked and took a break before heading out again: Dan had found a play that he had seen before and wanted me to see it as well. It was called “Come From Away” and was a very creative rendition of how the town of Gander, Canada, reacted after the attack on 9/11.

We arrived early, so we found a nice dinner of fish ‘n chips across the road and wandered around the neighborhood for a little bit before the doors opened. 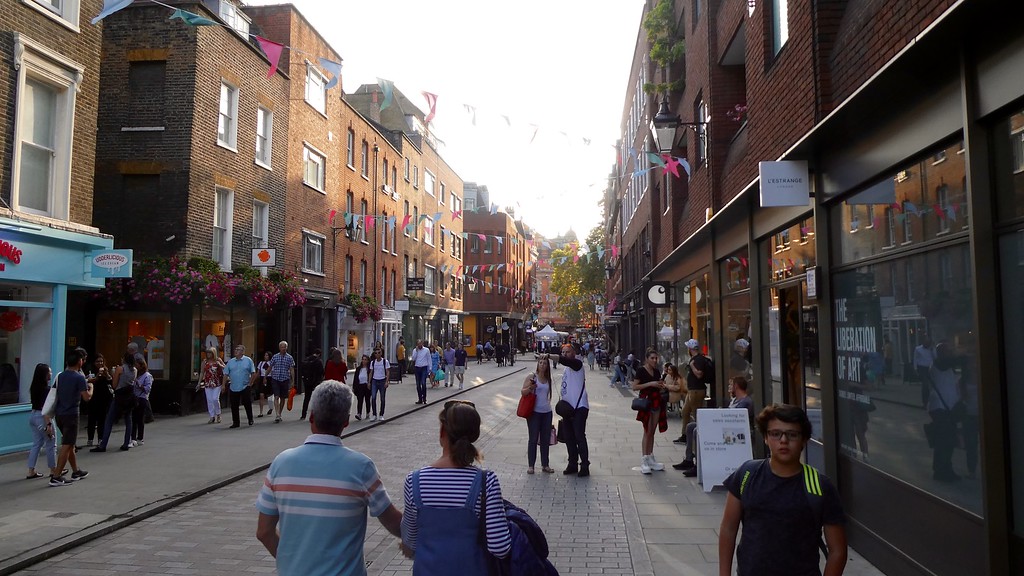 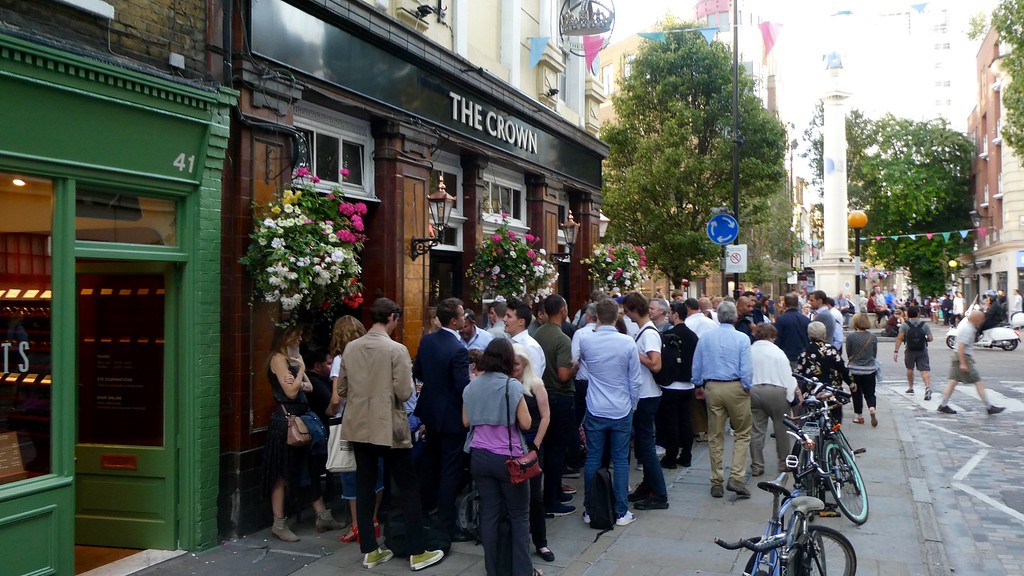 Dan got some fancy coffee 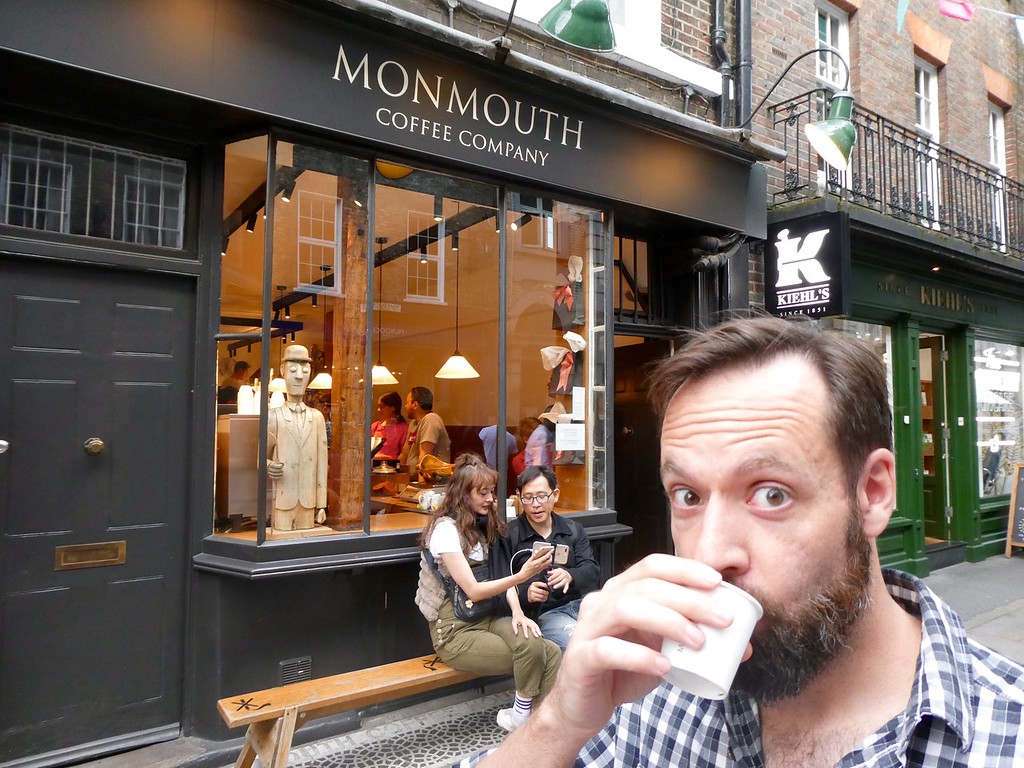 What a night! I had reservations about the hotel in the day time, but night time confirmed that this really was a “centrally located, cheap hotel” and nothing more. Outside, the street noise was constant: we were on the route to a nearby hospital, so sirens were common, and the motorcycles and cars were anything but quiet. Inside our room the bathroom light would not turn off and the mattress wasn’t the best. Personally, my legs were a little achey from the walking and my back was feeling for sore.

I was only happy to get up and start our day. Our first stop would be the Design Museum of London: the reason for our visit. We walked over in the morning sunshine and entered the exhibition. To be honest, I did not really know what to expect; I hadn’t thought much about it, but assumed that it would be a dry collection of photos and memorabilia from Stanley Kubrick. I was pleasantly surprised by how well laid out it was, and that the displays were much more interesting than I had ever expected. Since photography was allowed, so I can share some of what caught my eye the most.

Recognize any of these?

All work and no play (The Shining)

The dresses would not fit Dan (The Shining)

A letter from S Kubrick, signed “Annoyed and Depressed, but Lovingly” 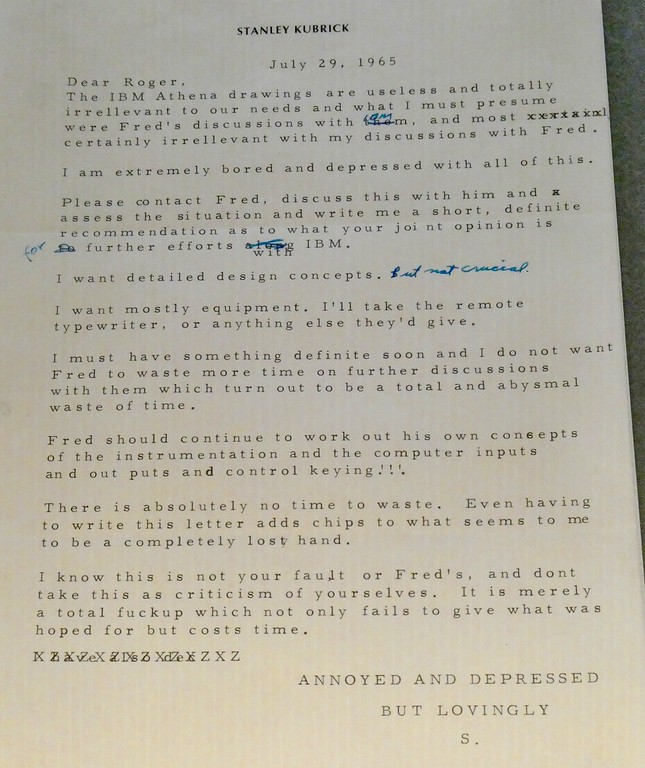 There was a series of rooms, each one dedicated to a particular film. In each room there might be a clip of the movie being played, displays of set pieces and scripts, original art work and models – every corner lead to something different. Overall, I was quite impressed.

There were a couple of other exhibits at the museum at the same time, but they didn’t hold a candle (for us) to the Kubrick exhibition.

In the main lobby of the museum (A Clockwork Orange)

From the Design Museum we made our way to the Natural History Museum. Dan had yet another adventure awaiting us!

A full size whale skeleton, dwarfed by the wonderful architecture 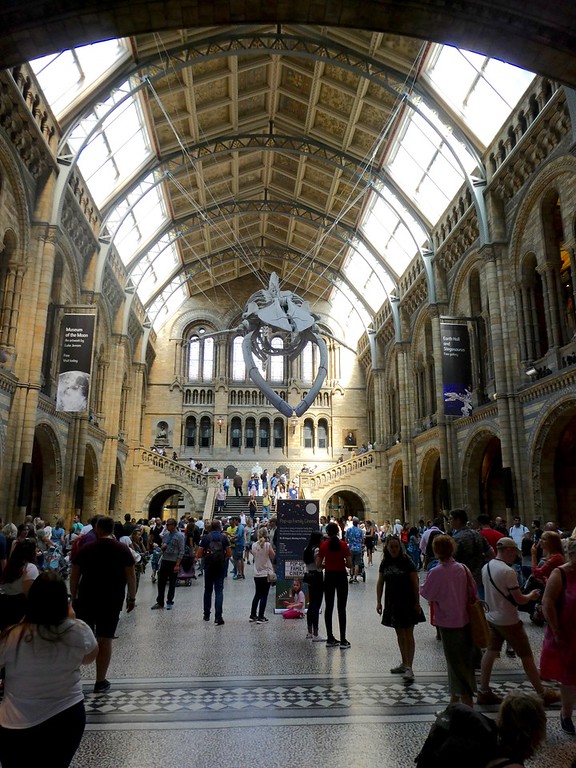 The museum itself is a work of art

The Natural History Museum has over 23 million items in its collection, tucked away in cabinets in the floors below. With specimens dating back to Darwin himself, the variety and scale of the collection is almost mind-numbing. We were a group of four, and our guide Mark unlocked the door to start the tour.

Rows upon row, and floor upon floor, of specimen cabinets 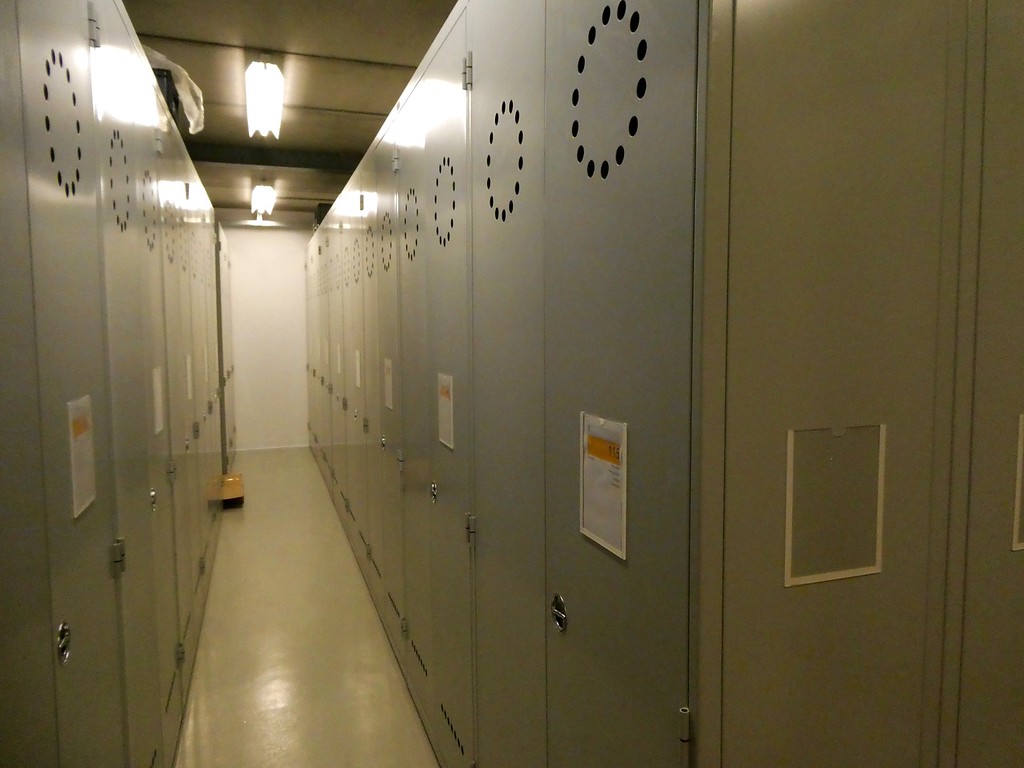 Our guide gave us some explanations of a few of the specimens that were out of the cabinets, sitting on shelves. Some were part of someone’s current research, while others had been left out for the various tours the pas through. 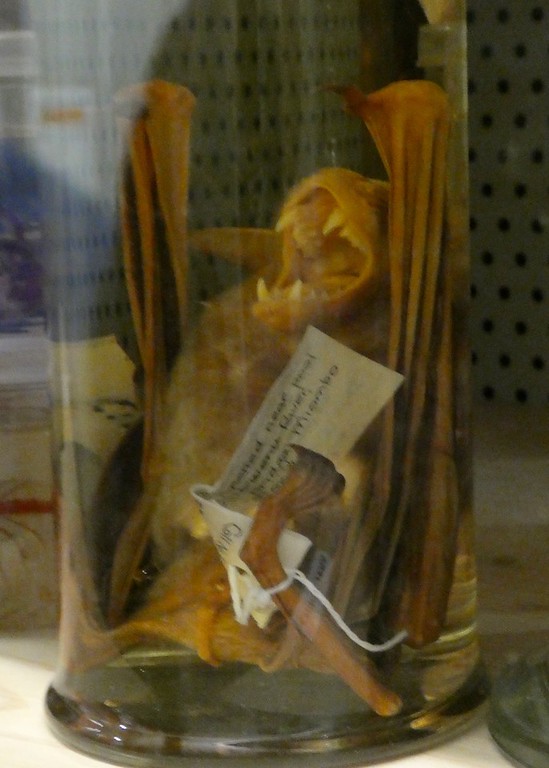 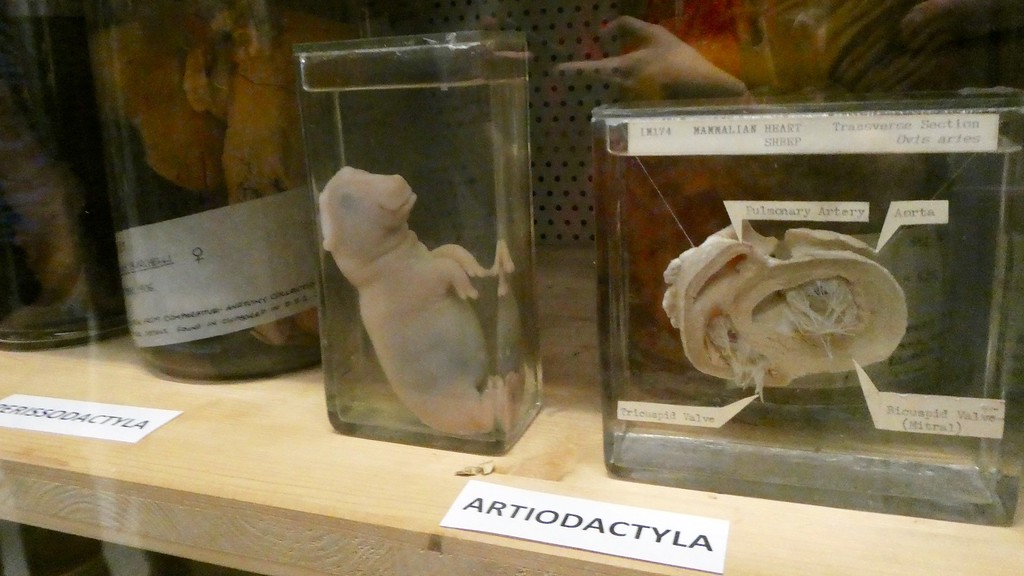 And then we entered the Tank Room – a room where specimens too large to fit into the cabinets were stored. 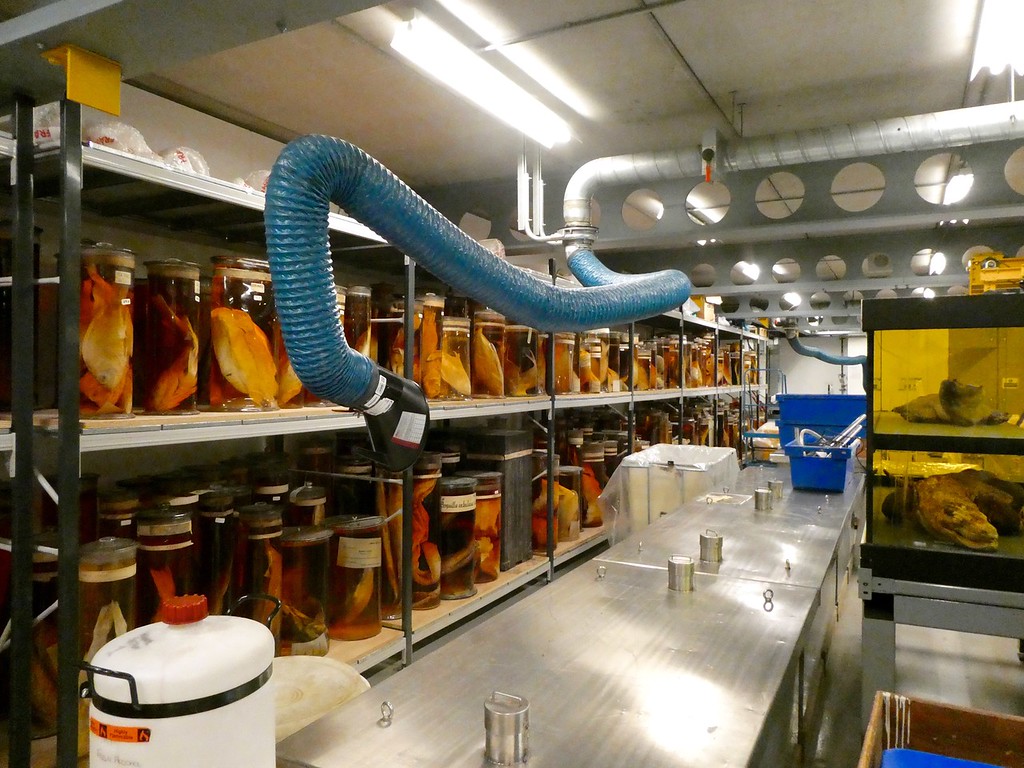 There were some really large containers 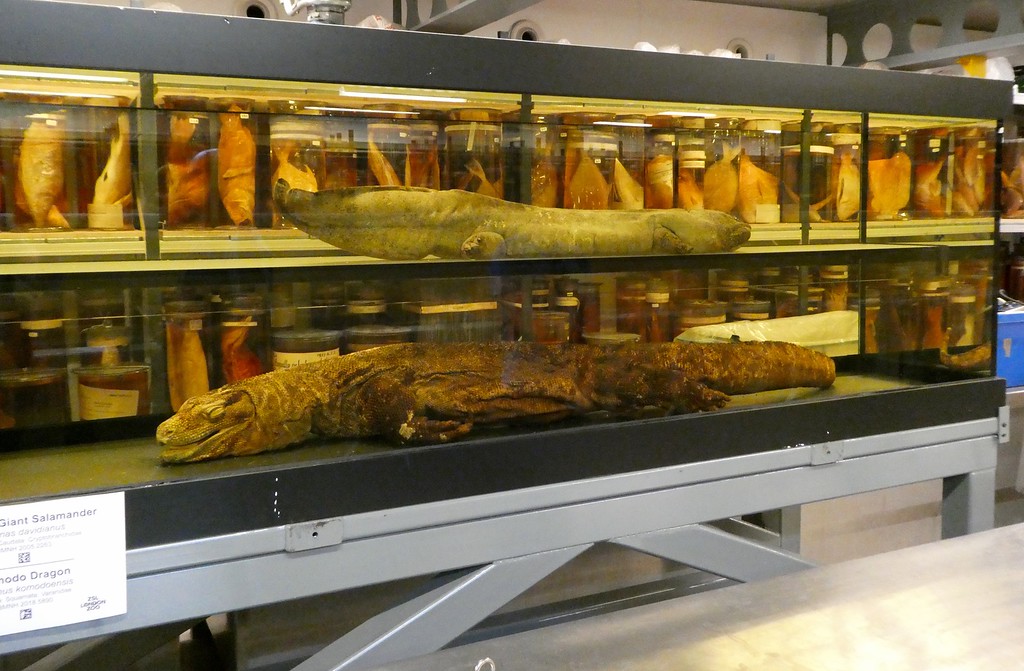 One big earthquake would spell disaster! 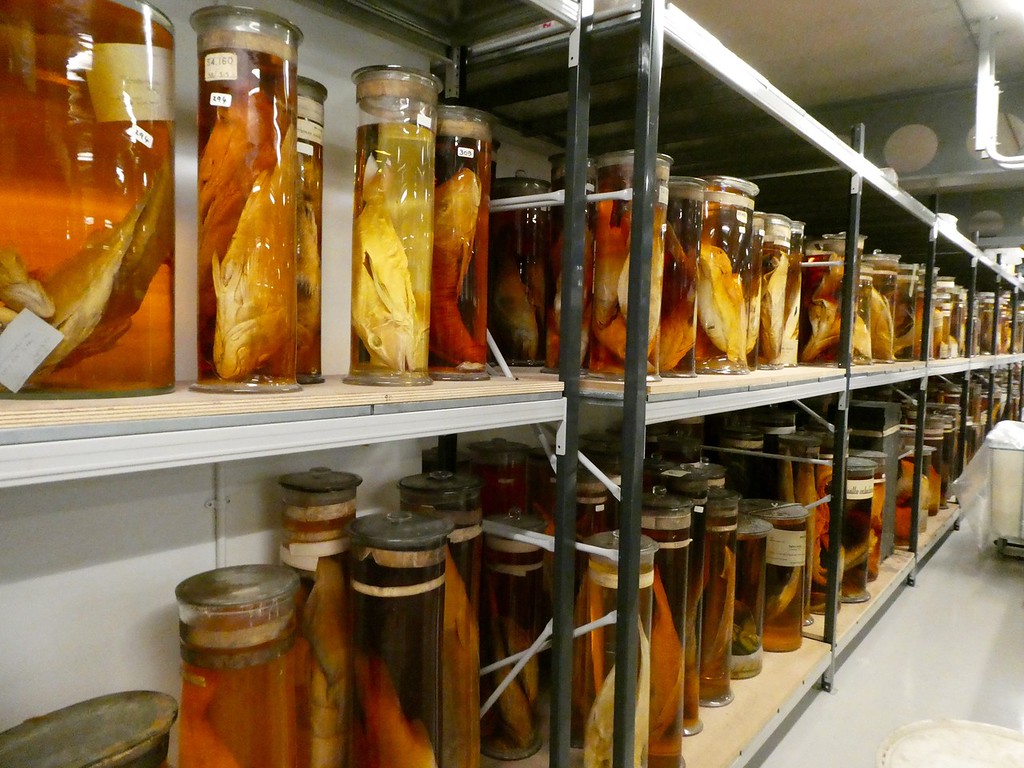 This specimen had swallowed another creature 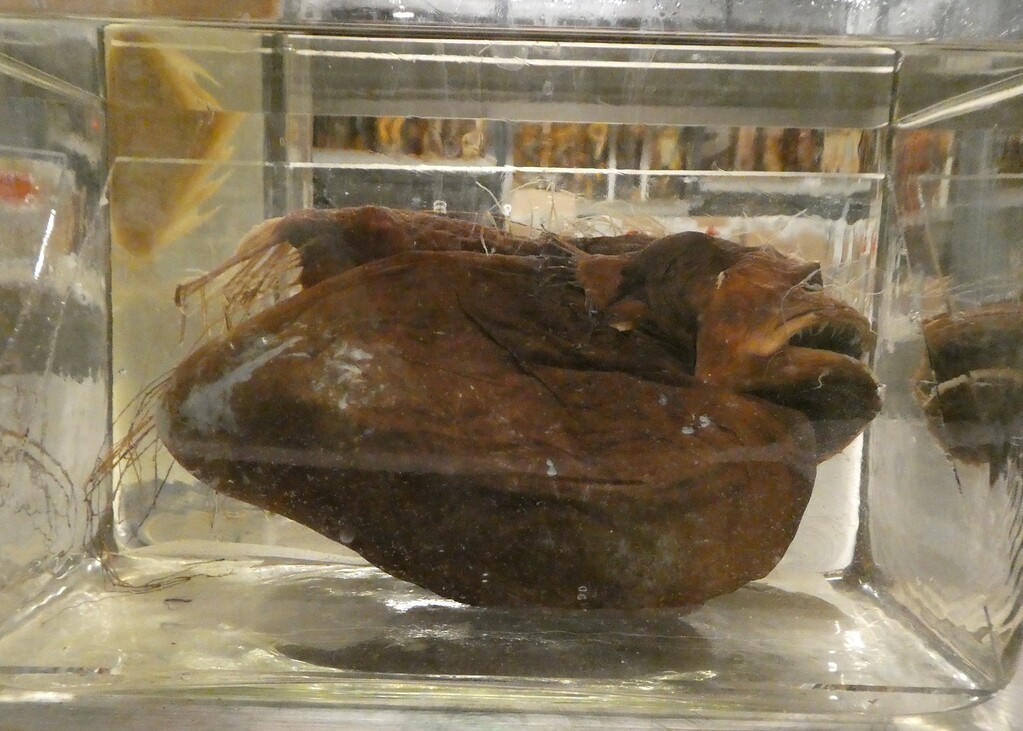 The X-Ray of the above

A collection of Darwin’s specimens 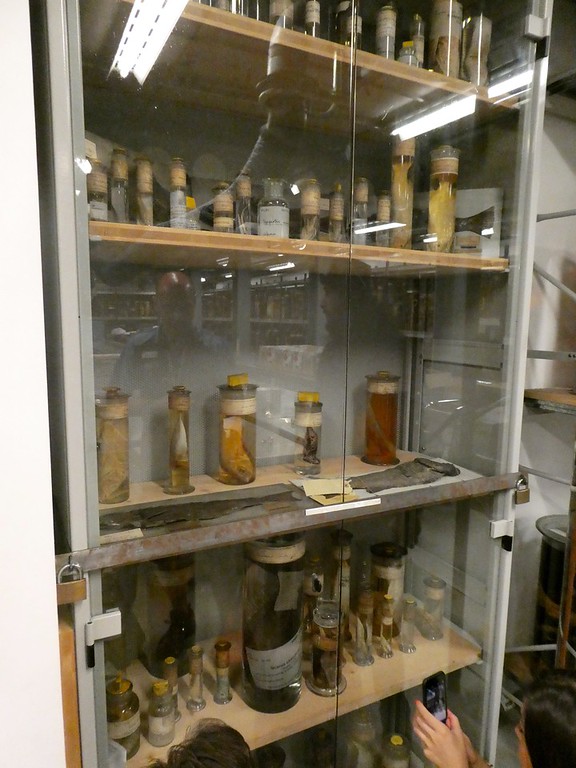 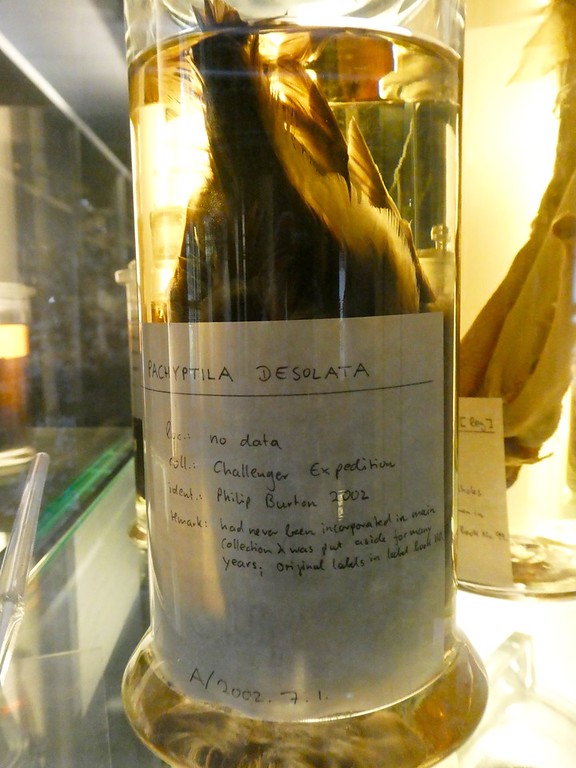 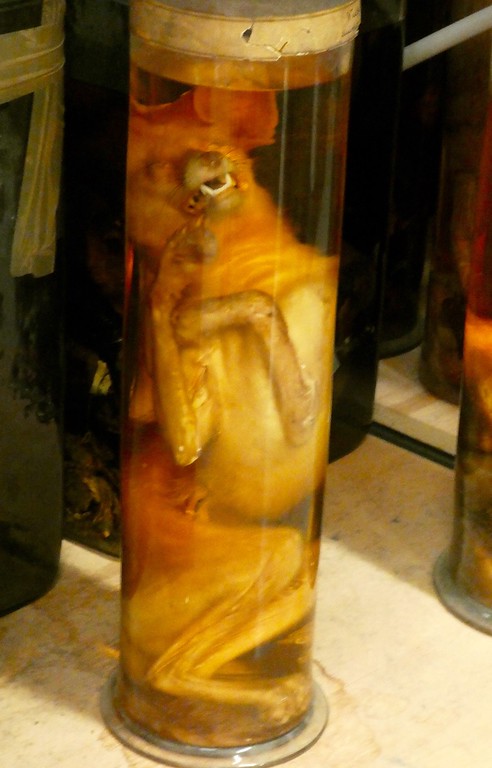 After the tour we returned to the sun-filled outdoors and made our way back to our hotel’s neighborhood to find some place for dinner. It had been a busy and interesting day!

Italian dinner at Bird in Hand 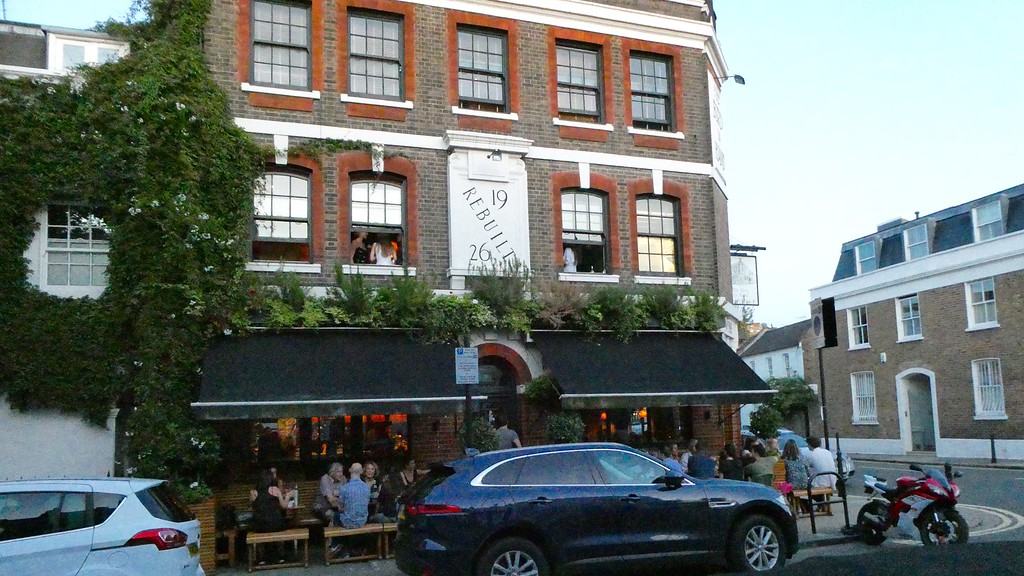