Through a stroke of good luck for Dan (and bad luck for my friend), Dan got his hands on an entry to the Jungfrau Marathon. touted as the “Most Beautiful Marathon of the World.” He had a few months to train for it and ready or not, it was now time. Dan’s colleague Andrea, whom Dan had already run with in both Arose and Verbier, planned to join us again. It would be a weekend of sunshine and fun!

Because the race started at 8:30 on Saturday morning, we took the train to Interlaken the night before. I had found hotel room within blocks of the starting line – something greatly appreciated by the runners in our little group. 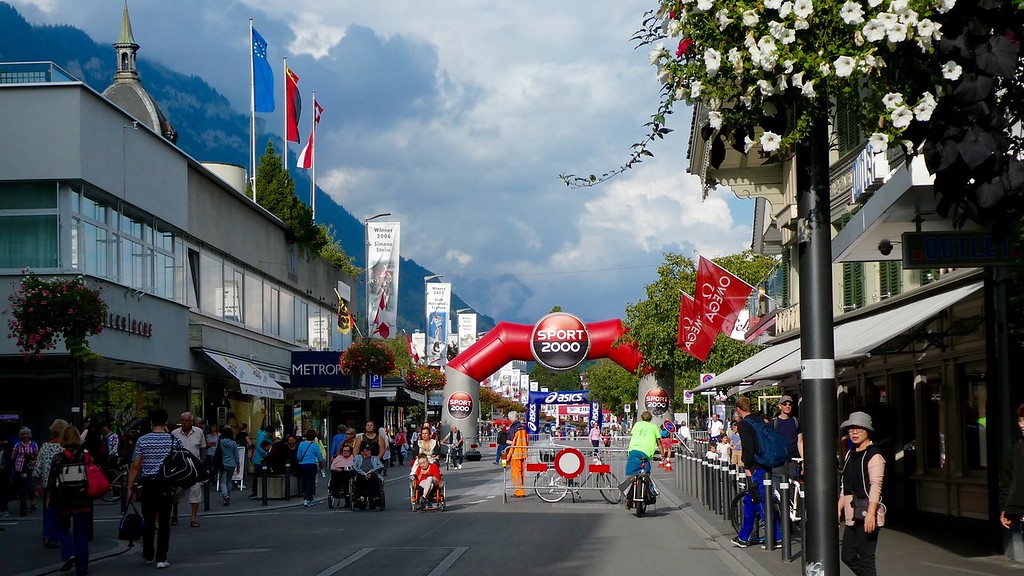 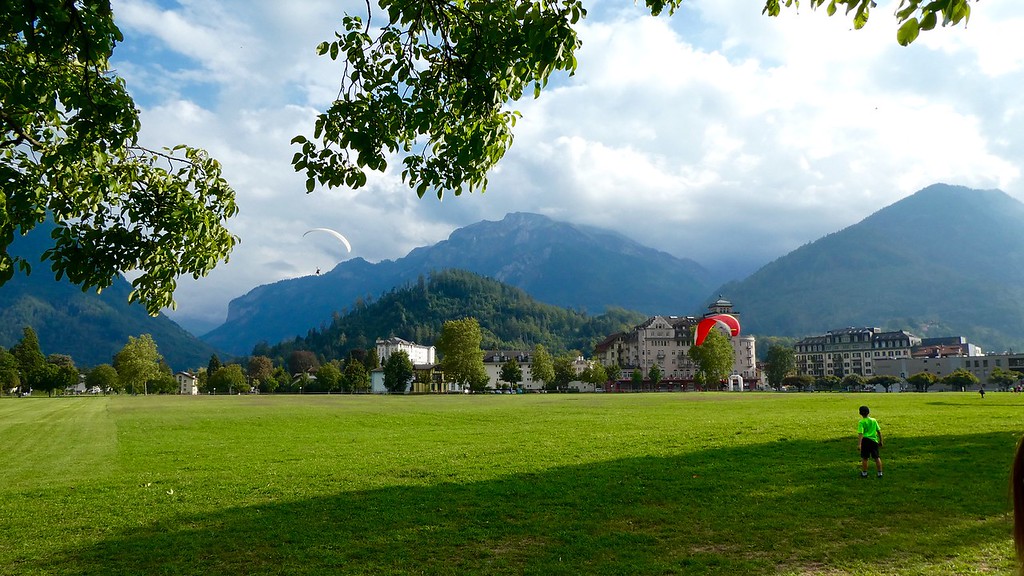 I had never spent any time in Interlaken before; I only knew it from the train station when I made connections to somewhere else. The station area left a lot to be desired, so I was surprised to find that Interlaken actually had some nice areas and views. The weather helped, too, as well as the numerous paragliders that wafted their way down from the towering mountains that surround this city. 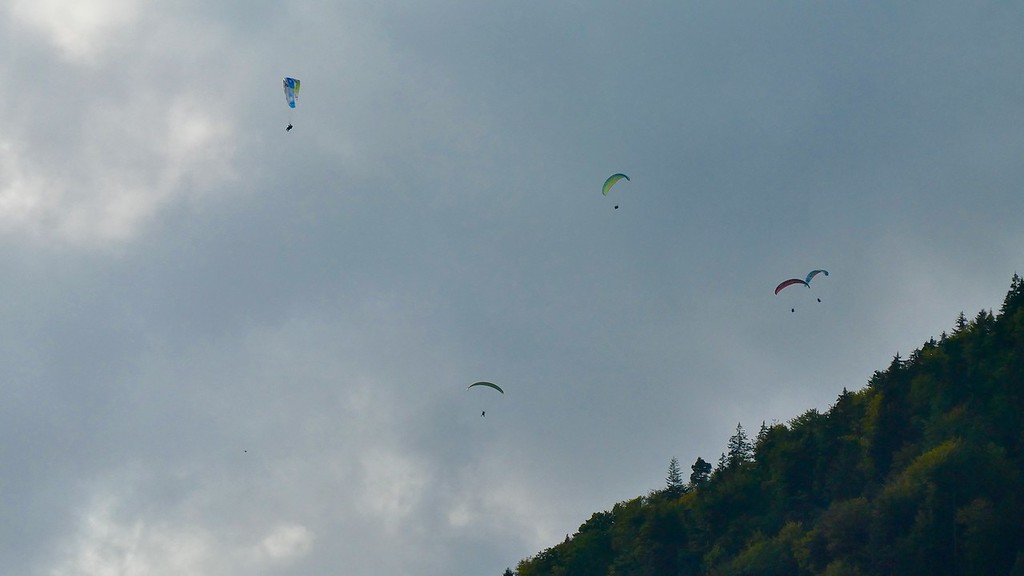 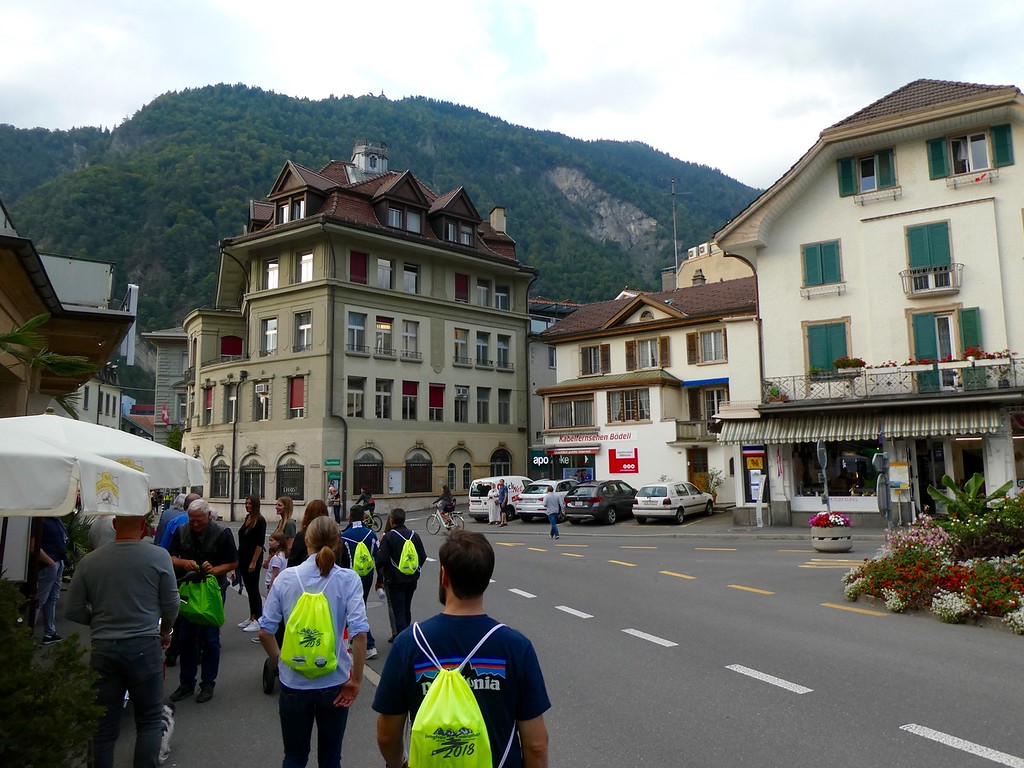 The children attacked by the dancing air man

The view from our hotel, Hotel Blume 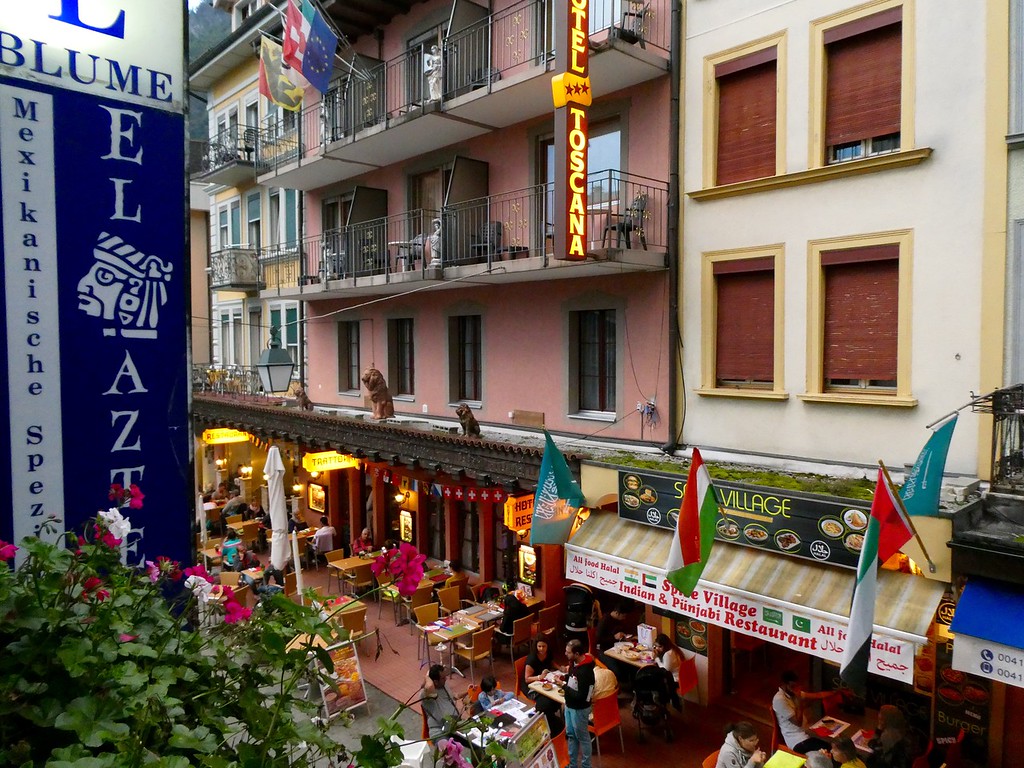 The next morning we all made our way to the start line. Andrea and Dan would run 42 kilometers – half of those up the side of one of Switzerland’s highest mountains. I had it easy: I’d take the train. I had also offered to meet them midway to offer support for additional clothing, snacks and whatever else they might want during their run. 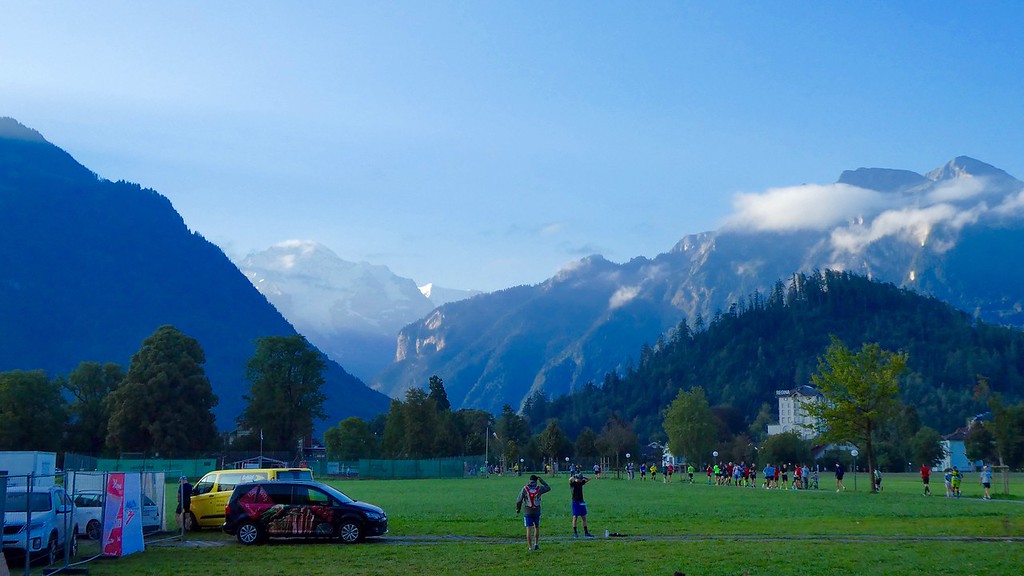 These are the professionals 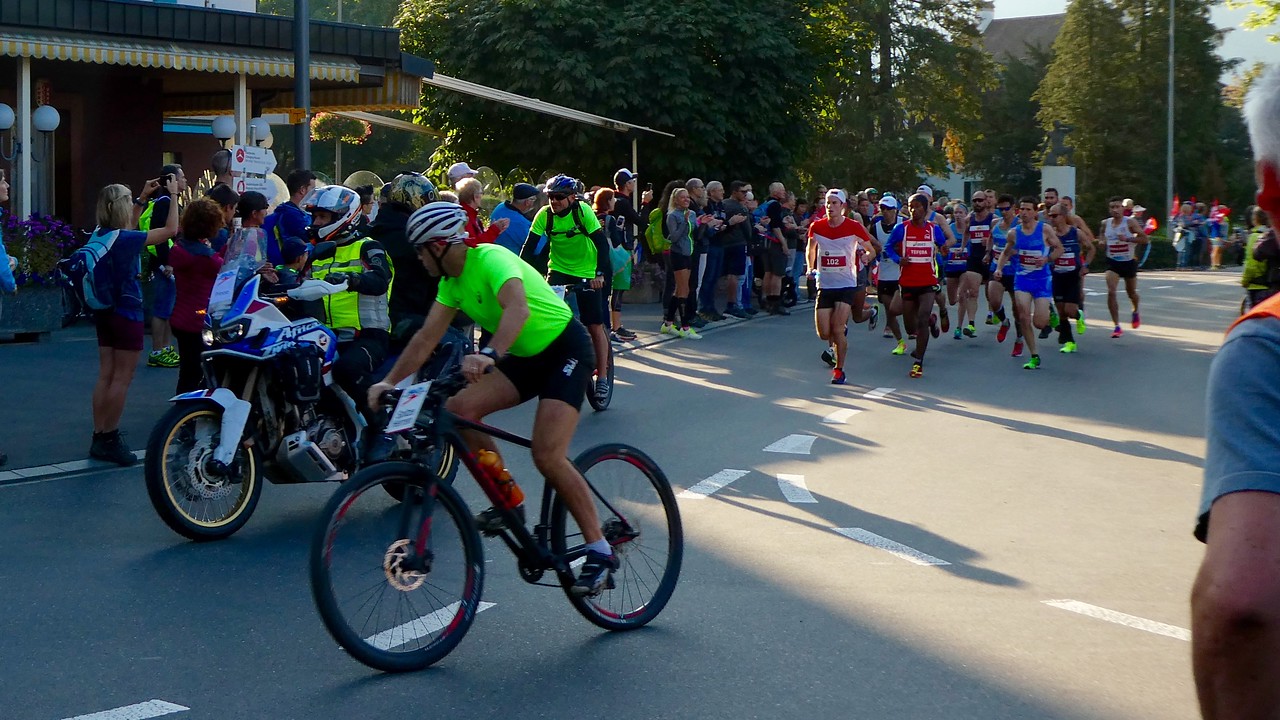 Andrea is in there somewhere

After Andrea and Dan had run by, I headed for the train to go to my next stop: Lauterbrunnen. With over 3,000 race participants, you can imagine the number of spectators that were present. Most of us spectators wanted to see the finish line and crammed our way into the trains that would take us there.

This is not the train to Lauterbrunnen 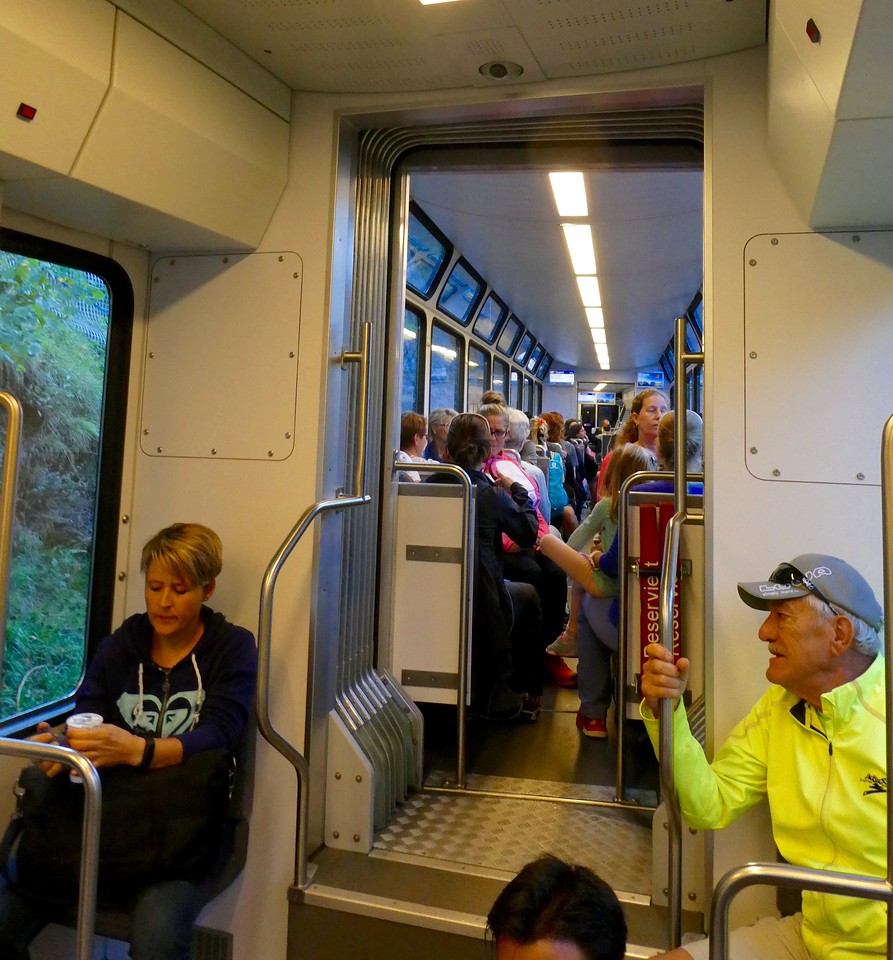 I had found space in the last car in the train, much to my glee. But after the second stop, I learned why: this car didn’t go to Lauterbrunnen, but instead would disconnect and go to Grindelwald. I had a moment of panic: I had one job, and I was already screwing it up. Fortunately I could get off the train at the next stop and run to the front cars and wedged myself in.

The leader of the race, as seen from the train window

At Lauterbrunnen I changed trains to continue my way up. I was once again on schedule – ahead of schedule, actually – and decided to check out the festivities in Wengen. I was too early to see the leaders of the race, but there were still plenty of people gathered, and another local band was ready to greet the runners with their cheerful tunes. 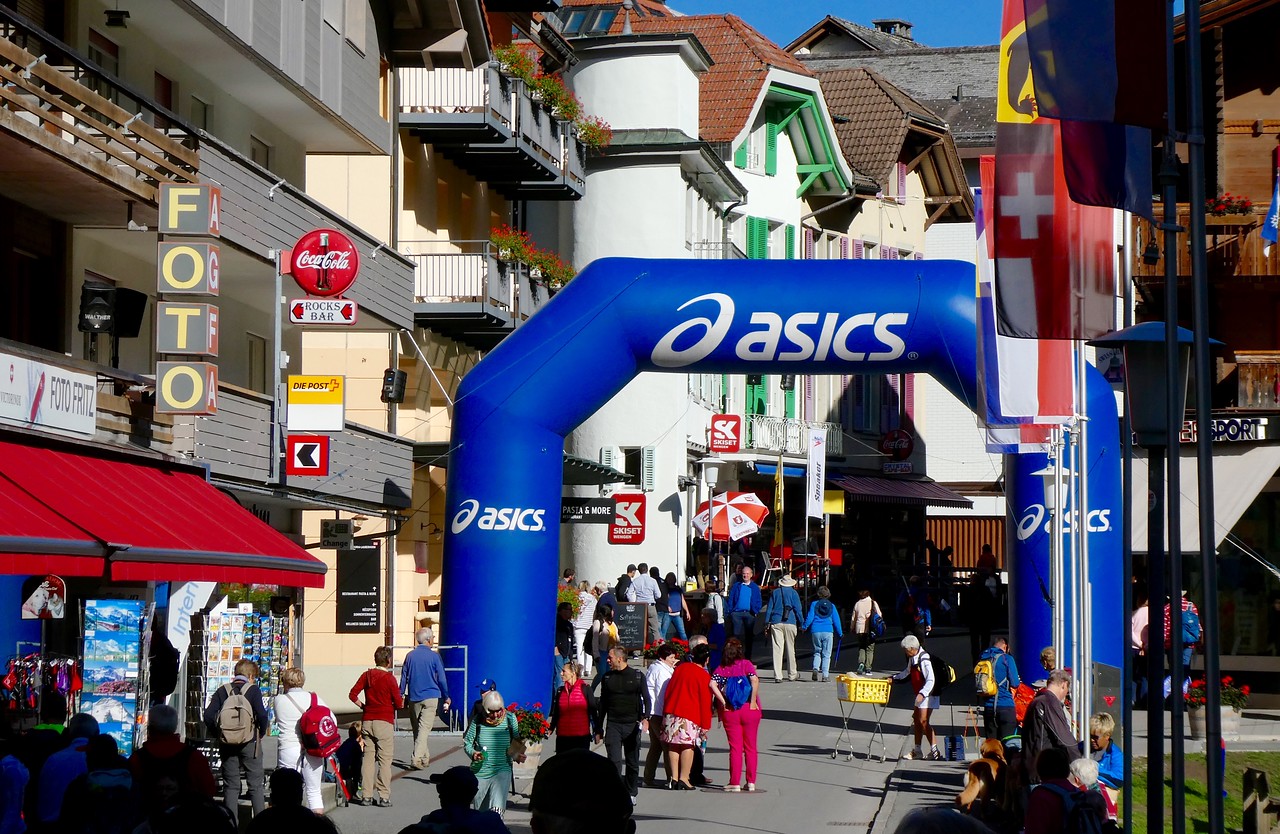 The plan was for me to wait just beyond the first aid station past Wengen. I hopped on the next train coming through Wengen, got off two stops later, and walked back downhill to the comprehensive aid station that had been set up there.

Looking back at Wengen

Looking up at Jungfrau 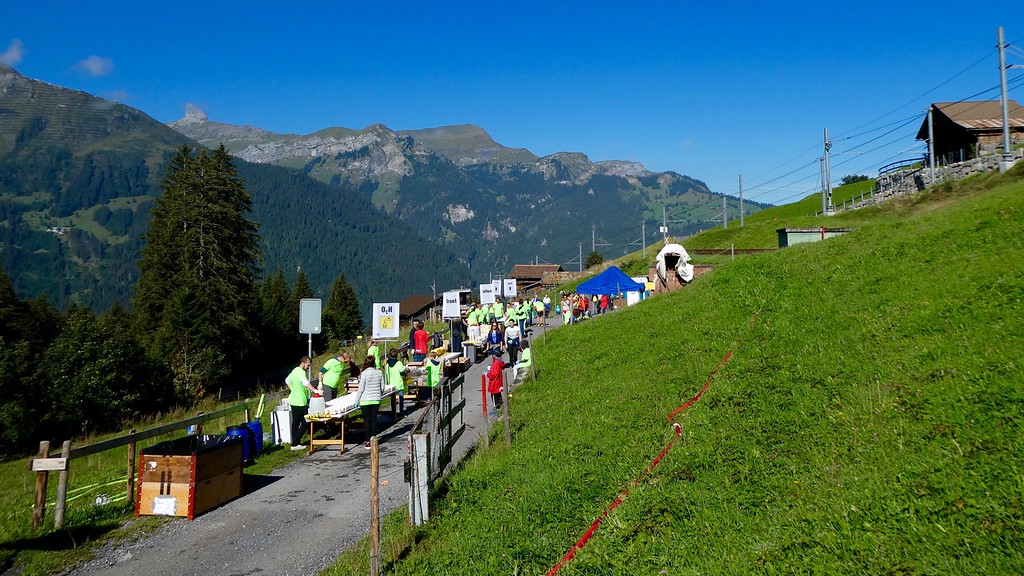 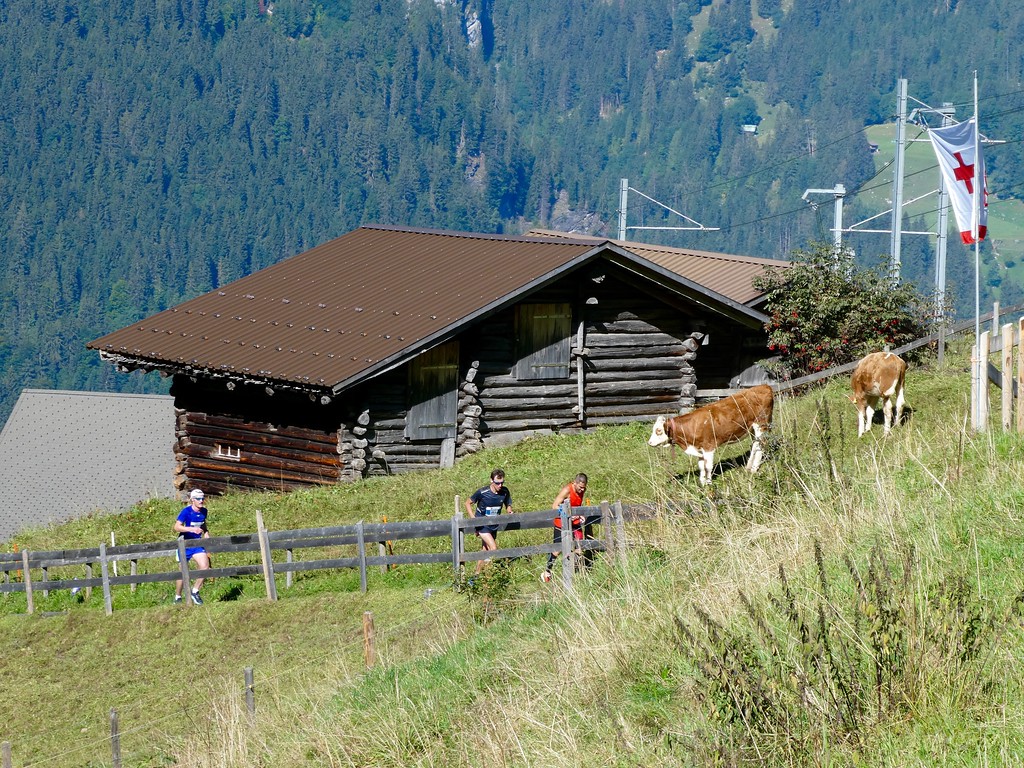 Some of the early runners

The race promoters had a great system of tracking each runner. Here I am watching the gradual advance of Andrea and Dan

Spectators on the train were enthusiastic

The weather was fantastic. I knew right away that neither Andrea nor Dan would need anything I held in the bag at my feet. But still I stood there and cheered on the other runners while I waited for “my runners” to come by. 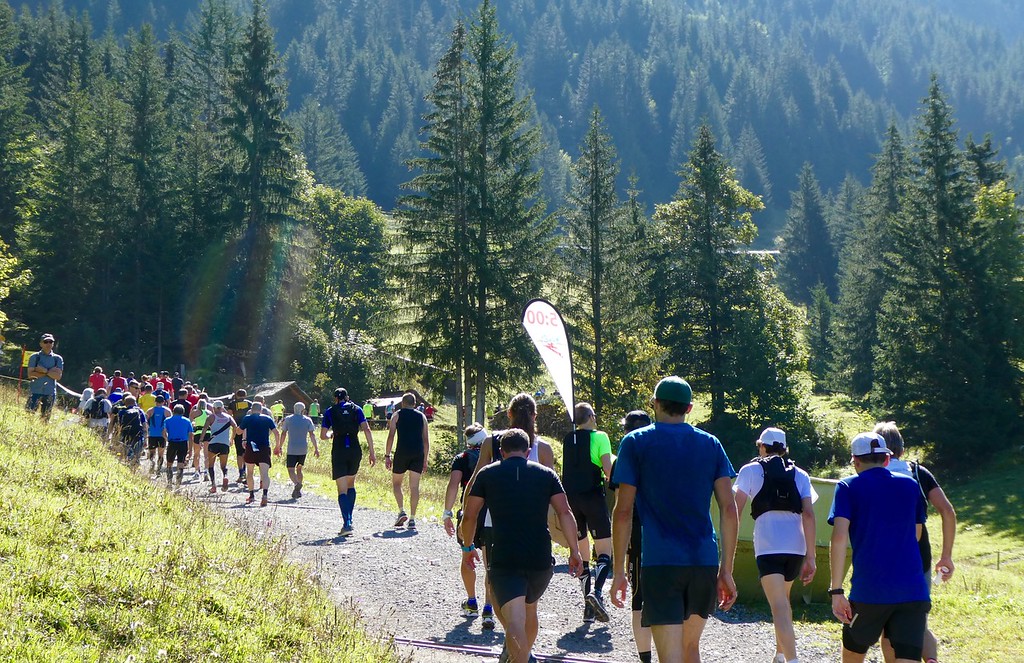 It was interesting to see the variety of runners go by. The early ones sloshed water over their heads and in their mouths, barely even slowing down. As time passed, the runners passed more slowly. Some stood to the side, while others walked briskly by. And while most people wore comfy synthetic running gear, others were more expressive in their clothing choices.

Here comes Dan! And quite a few others…

Now that both Andrea and Dan had reached me, it was time for me to get to the finish line to greet them. I walked with Dan back up to the train station, and then left him to his “brisk walk” while I watched from the comfort of the train. 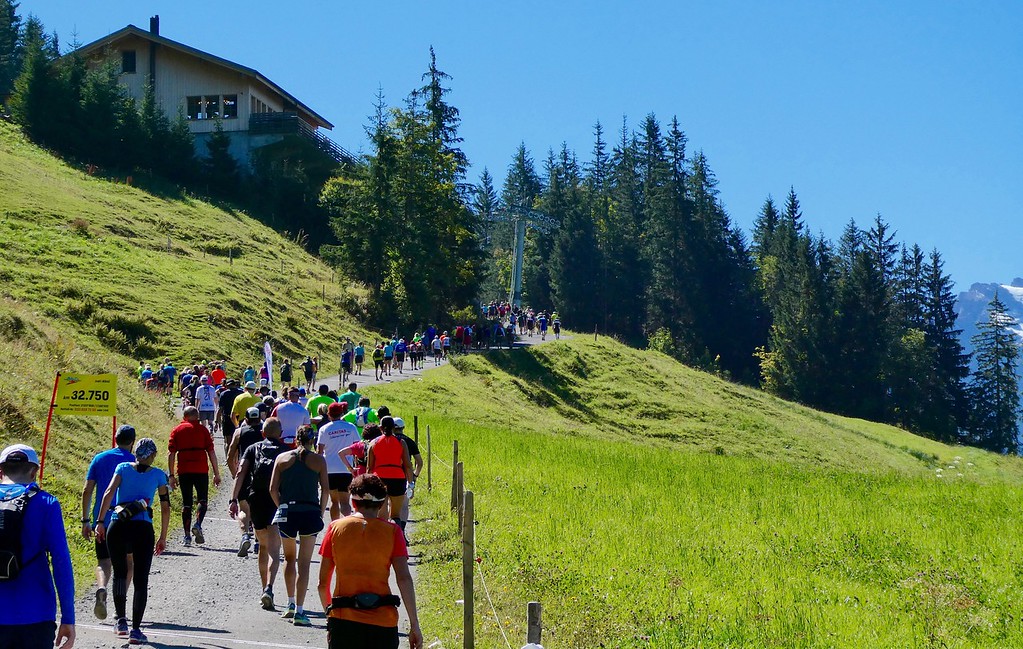 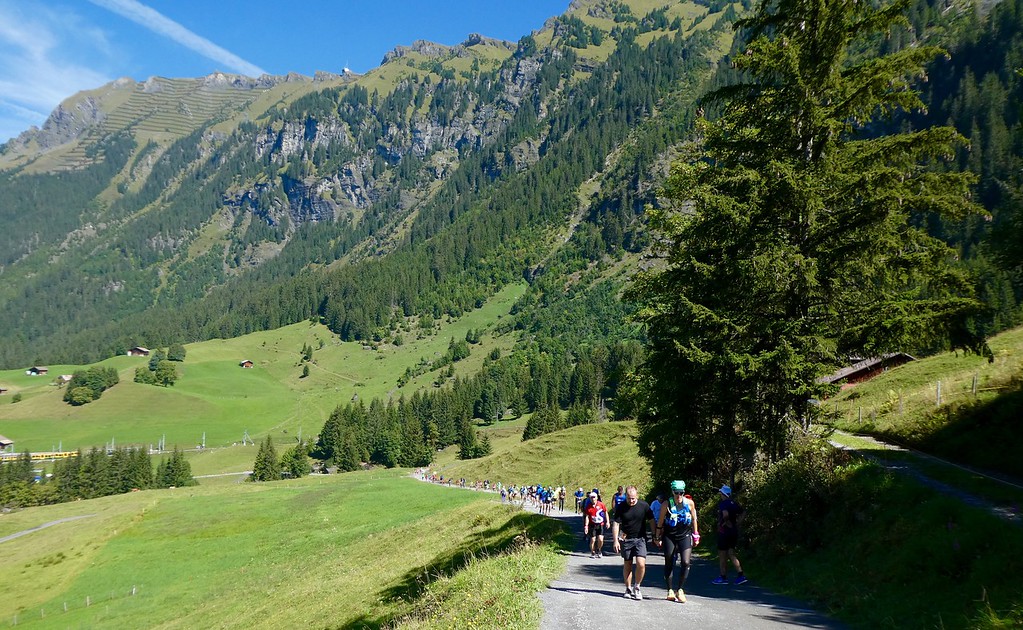 Another view of Wengen

Not easy to see, but there is a line of runners along the mid-range tree line

The finish line – up on the hill 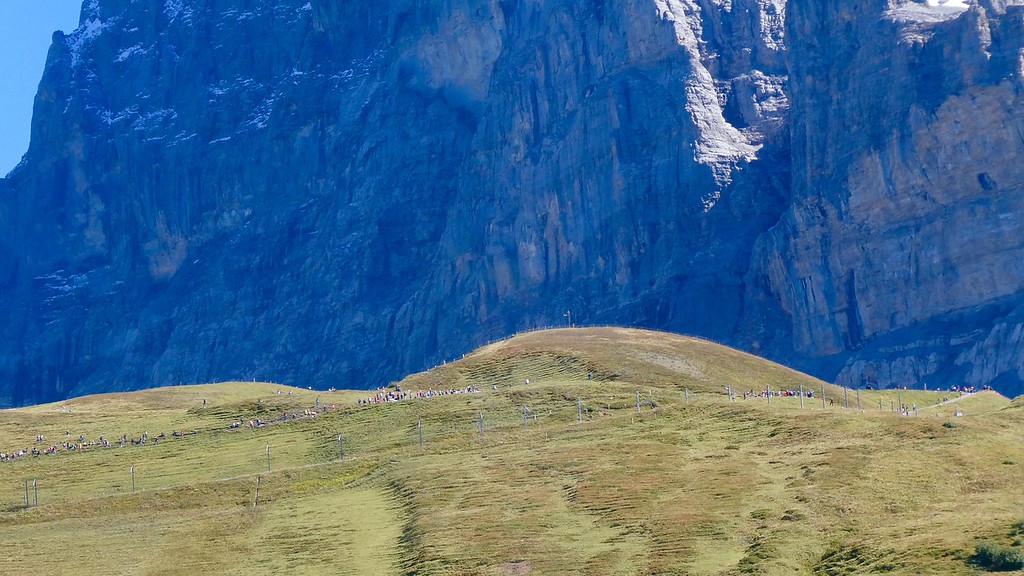 Why they call it the Most Beautiful Marathon of the World 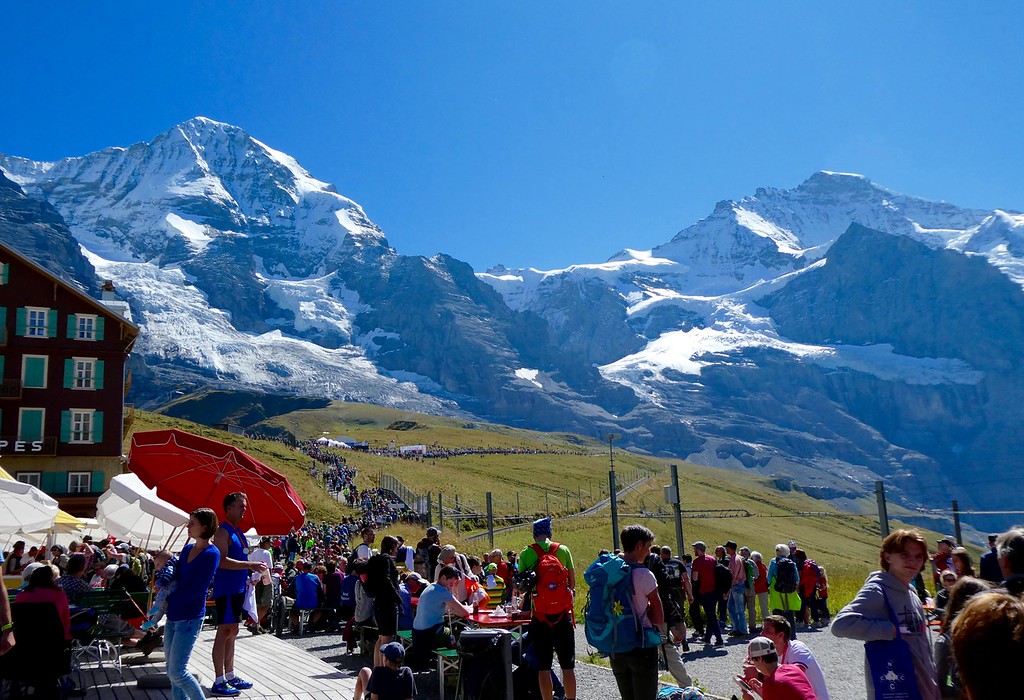 Looking over the other side from Kleine Scheidegg 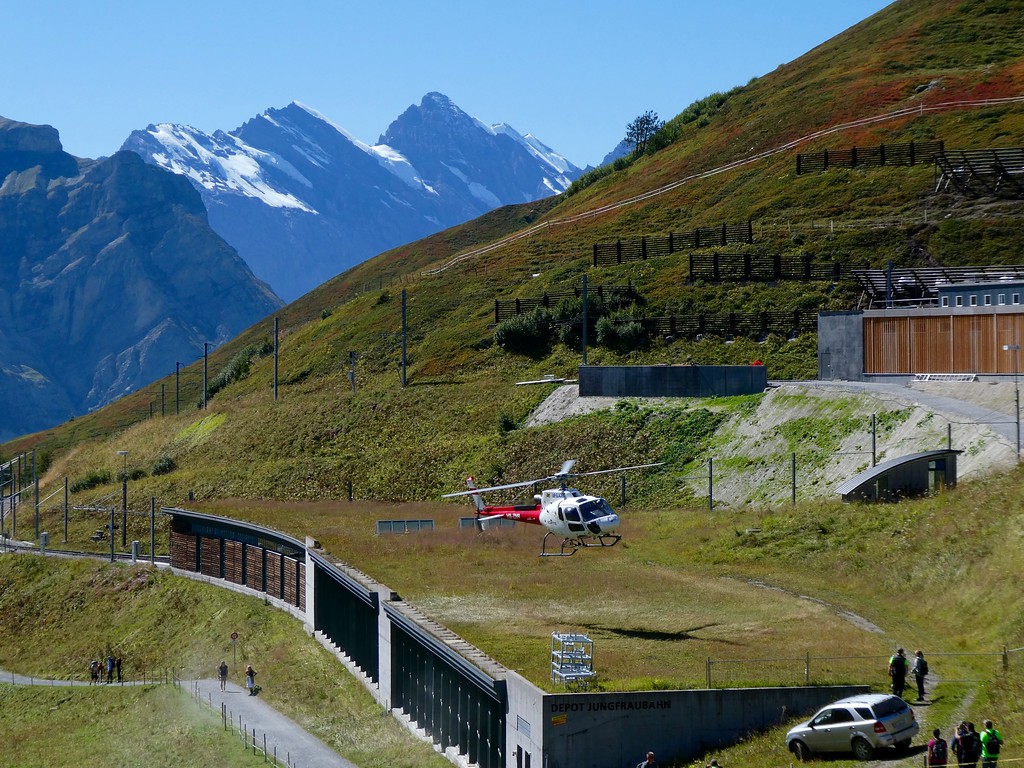 The time it took for me to wait for Dan at the mid-way point, then get on the train and get to the top, meant that I was too late to watch Andrea cross the finish line. We knew she was fast, but I never expected to miss her! It turns out I hadn’t missed her by much. We somehow located each other in the sea of people and waited for Dan to reach us. 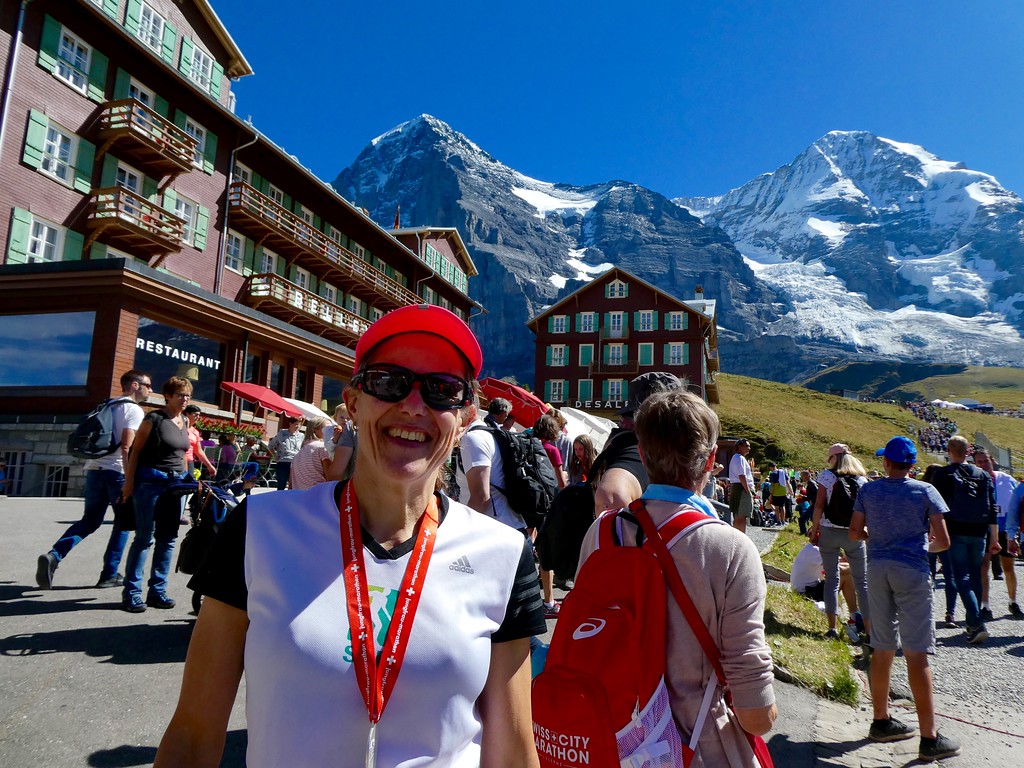 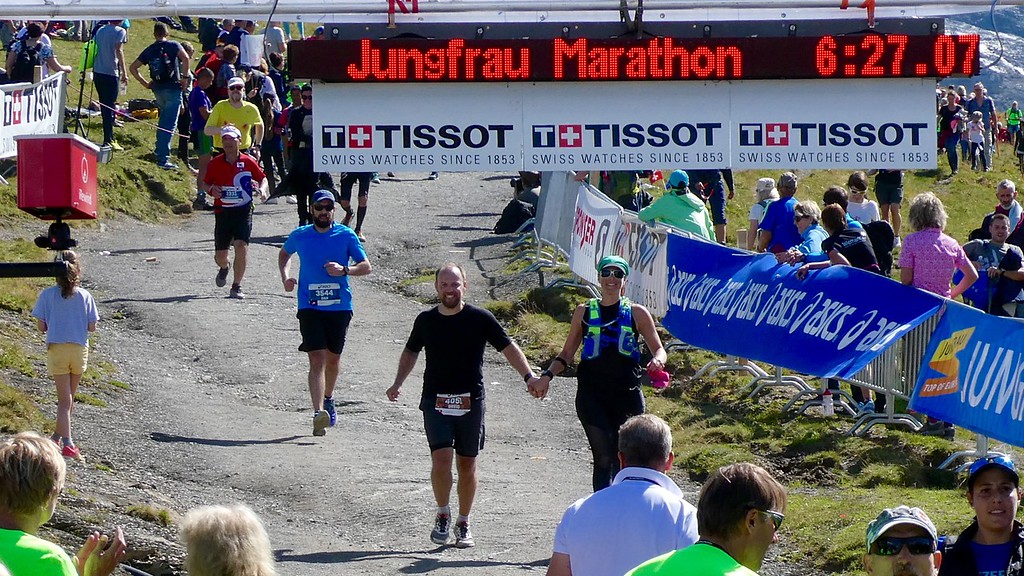 He does not look like someone who just ran a marathon up a mountain! 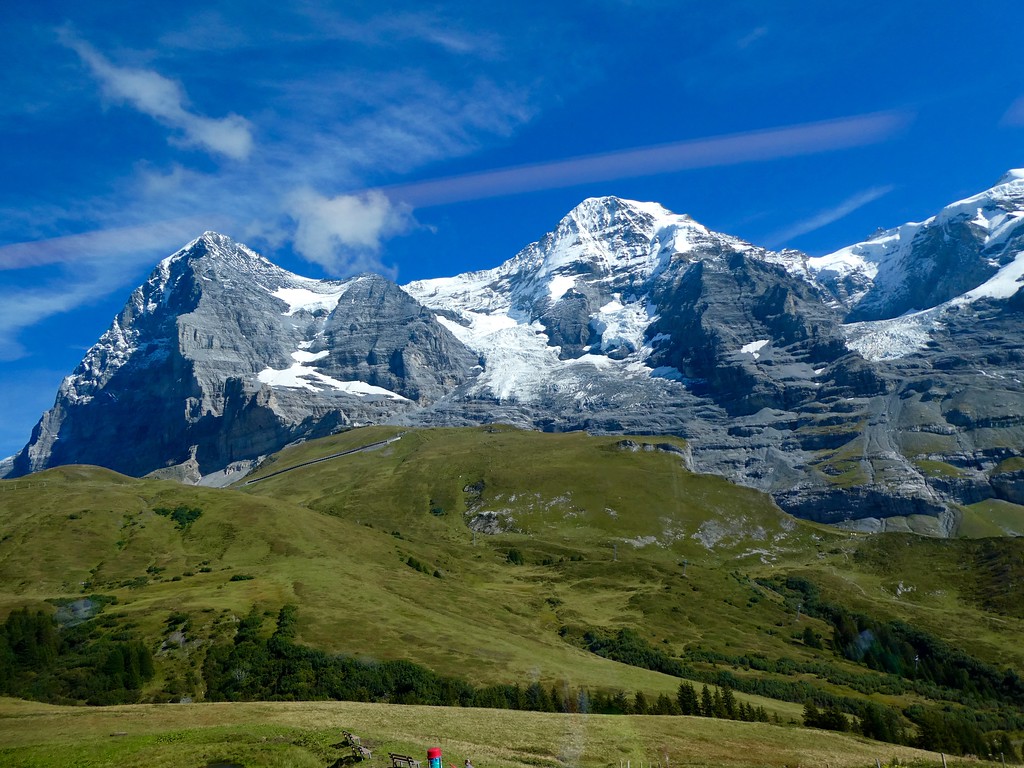 We fought our way through the crowds to get on one of the trains that would return us to Interlaken. It was a surprisingly long ride and it was good to get back into Interlaken, where we had a relaxing dinner in the restaurant under our hotel. 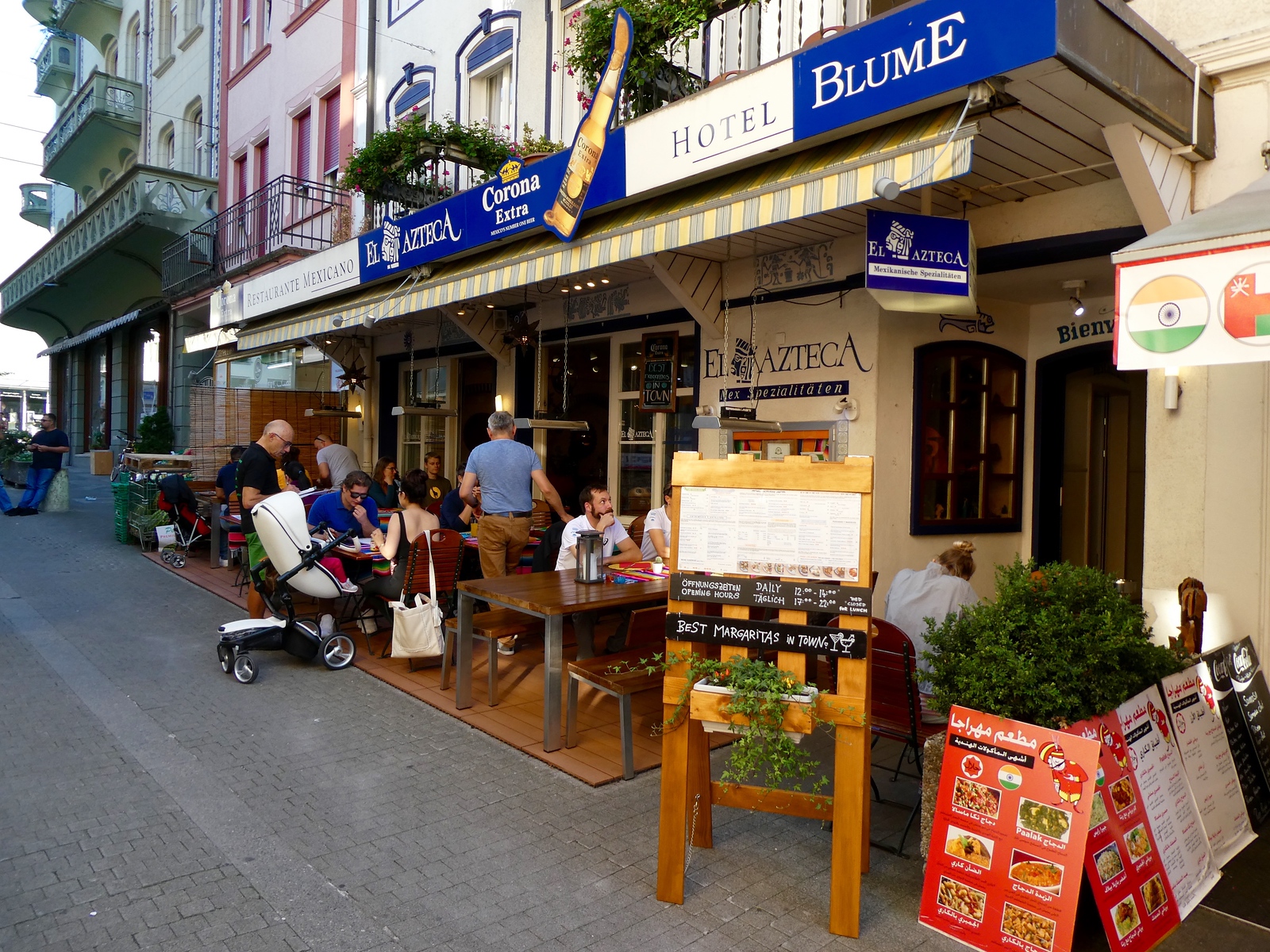 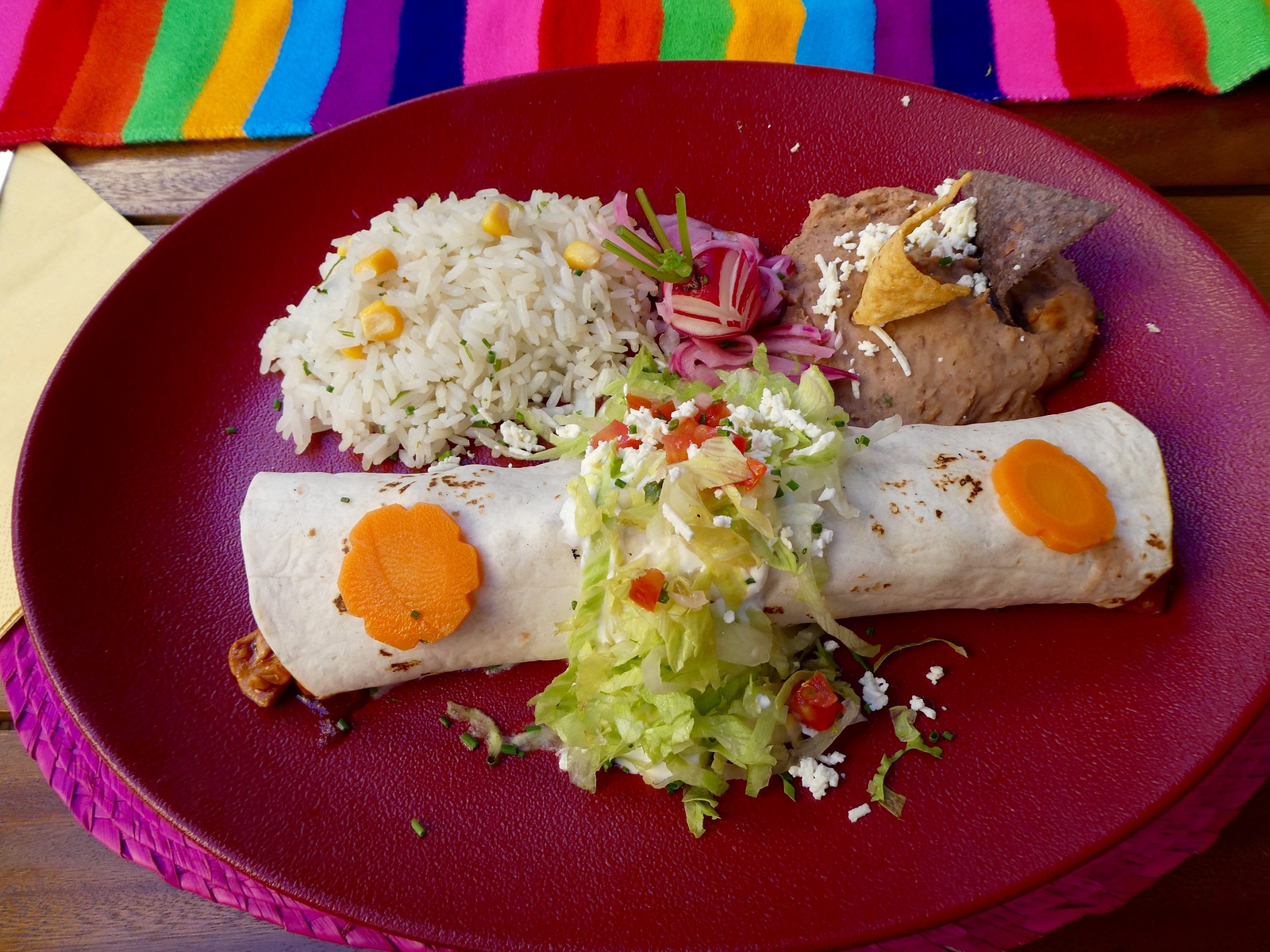 Andrea had to leave right after dinner, but Dan and I were planning on staying overnight and making the return home a relaxing one. Sunday was just as beautiful as the day before, and while we did a little bit of walking around, Dan wasn’t up for too much. 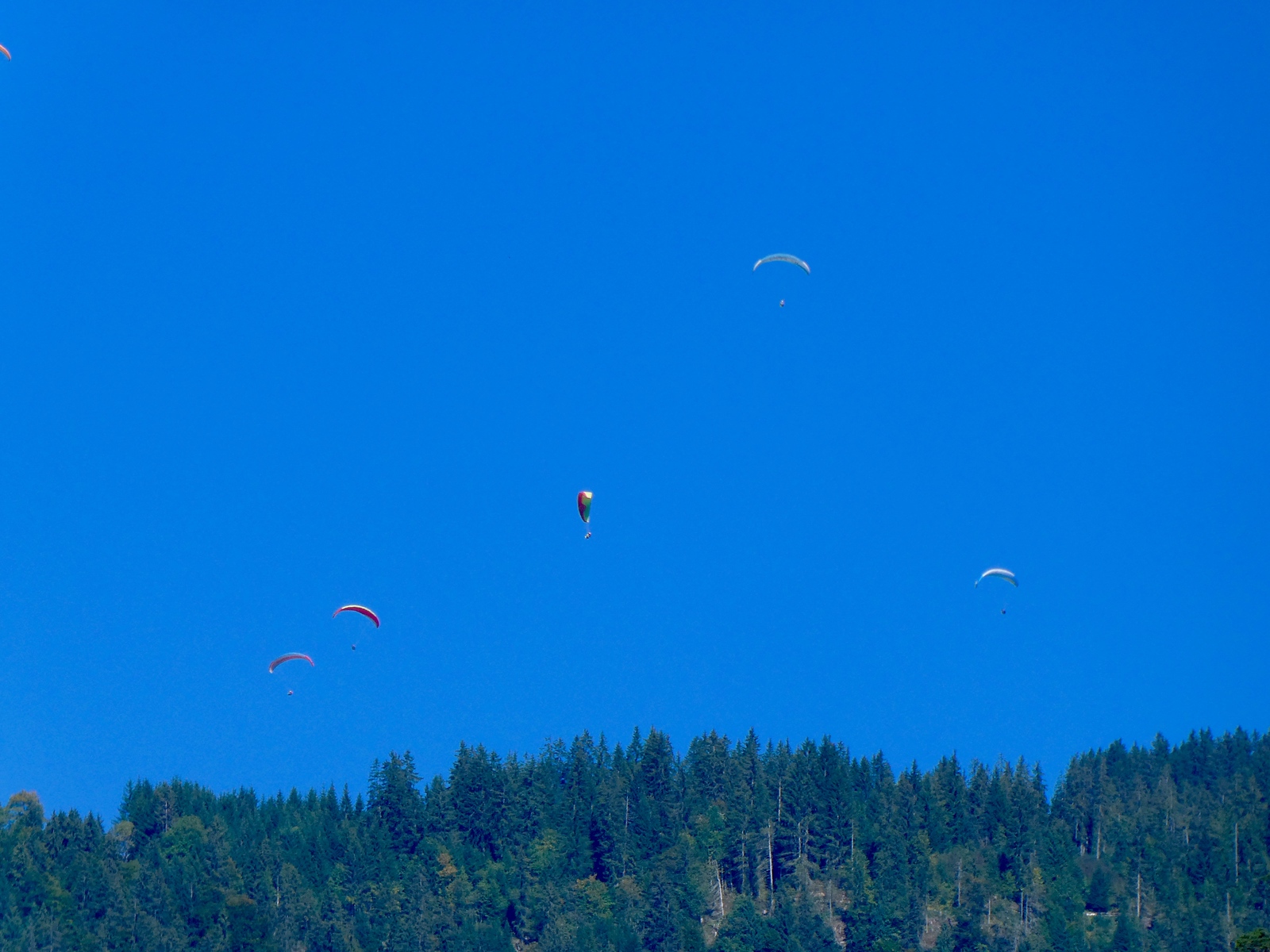 Eventually we packed our bags, hopped on a train and came home. I am really proud of Dan for not just finishing the race, but doing it in such a good time and almost with what I would call “ease”. Go Dan!