Dan was otherwise occupied today so I could do whatever I wanted. And what I wanted to do was to ride my motorcycle – all day. Now where to go? I would go south, to the Alps, but not over any of the major passes. Even though I haven’t been on them for “too long”, I didn’t feel like dealing with the crowds that I was certain to run into on Grimsel or Furka Pass.

So off I went, with no real destination in mind. I took some photos along the way. 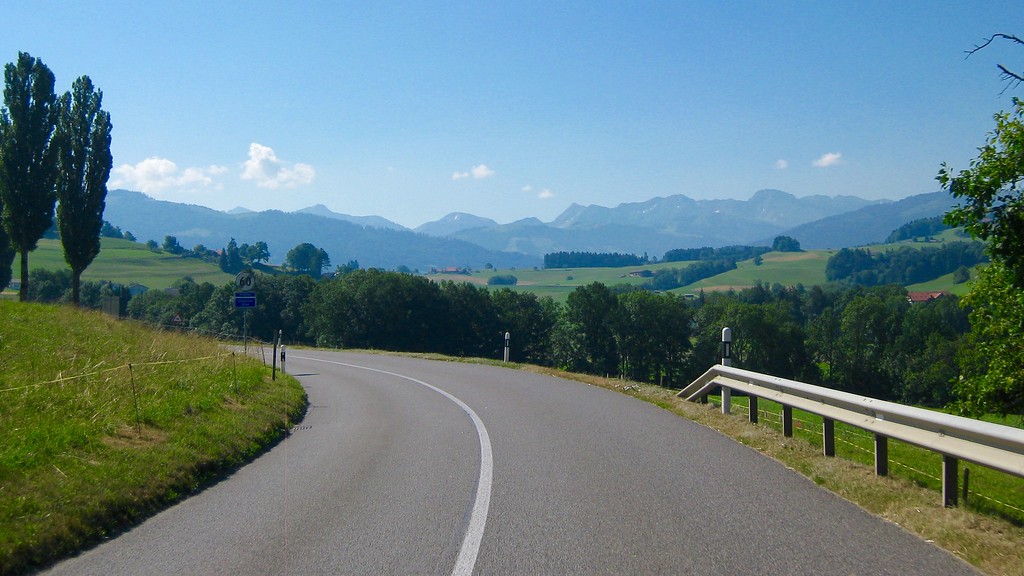 This overpass exists solely to connect the house to the barn 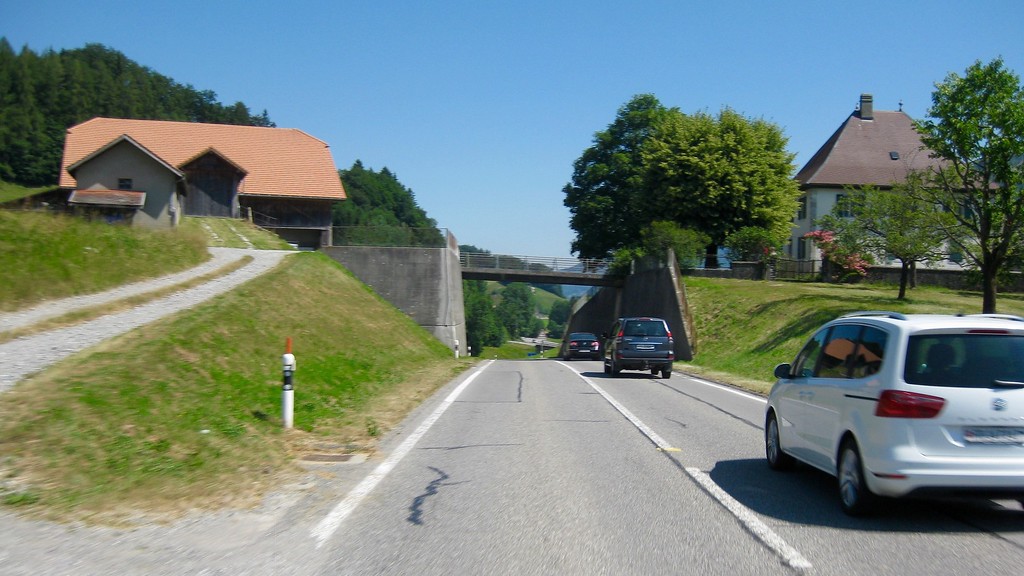 I enjoy riding through the countryside, as I never know what I’ll see. Today I saw a train engineer crossing an overpass who returned my wave with more enthusiasm than expected. And a father was riding a quad through his fields with his young son on his lap. Later in the day, in the mountains above Gruyères, man was power washing what appeared to be cheese boards out in front of his shop. Things that I notice, but not things that I could catch with the camera.

But there were other things I could catch with the camera. 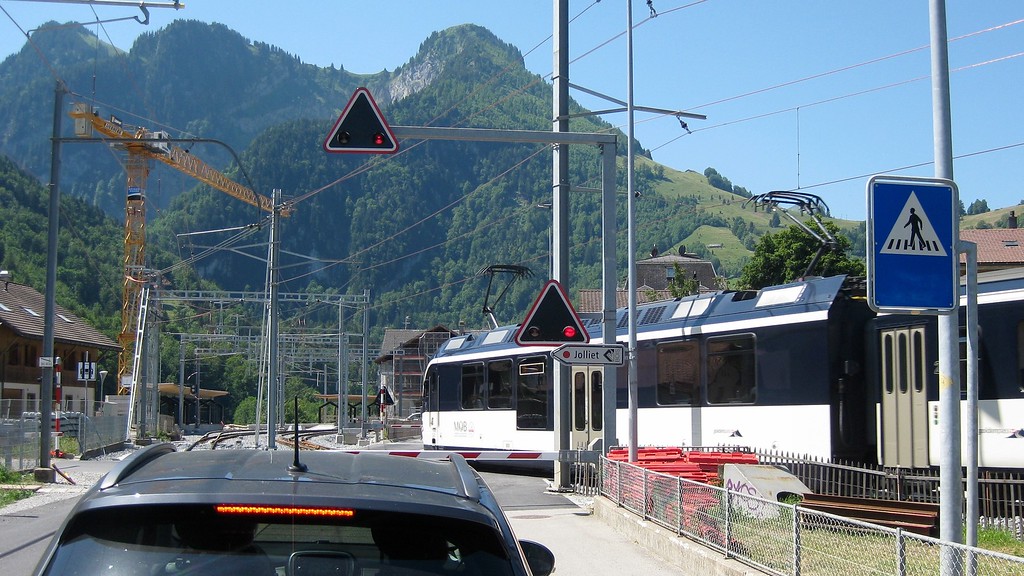 Raking hay on the hillside

I came up behind this set up just as I was nearing Gstaad. I still don’t know what kind of bike it was, but it used a lefthand knob shifter, something I’d never seen before. 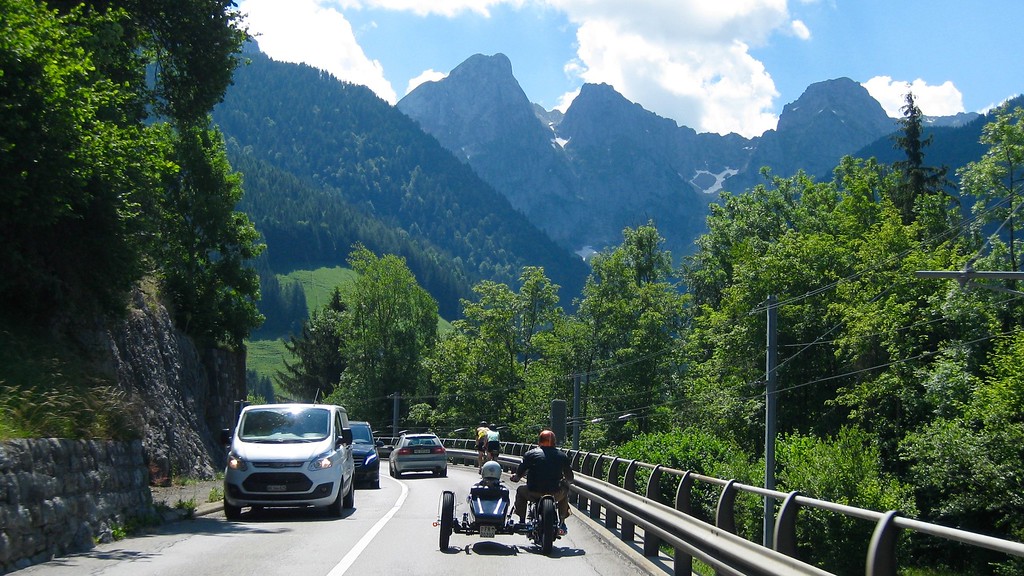 And he took advantage of a construction stop to remove his jacket and light up a cigarette. I guess a 3/4 helmet allows for such activities… 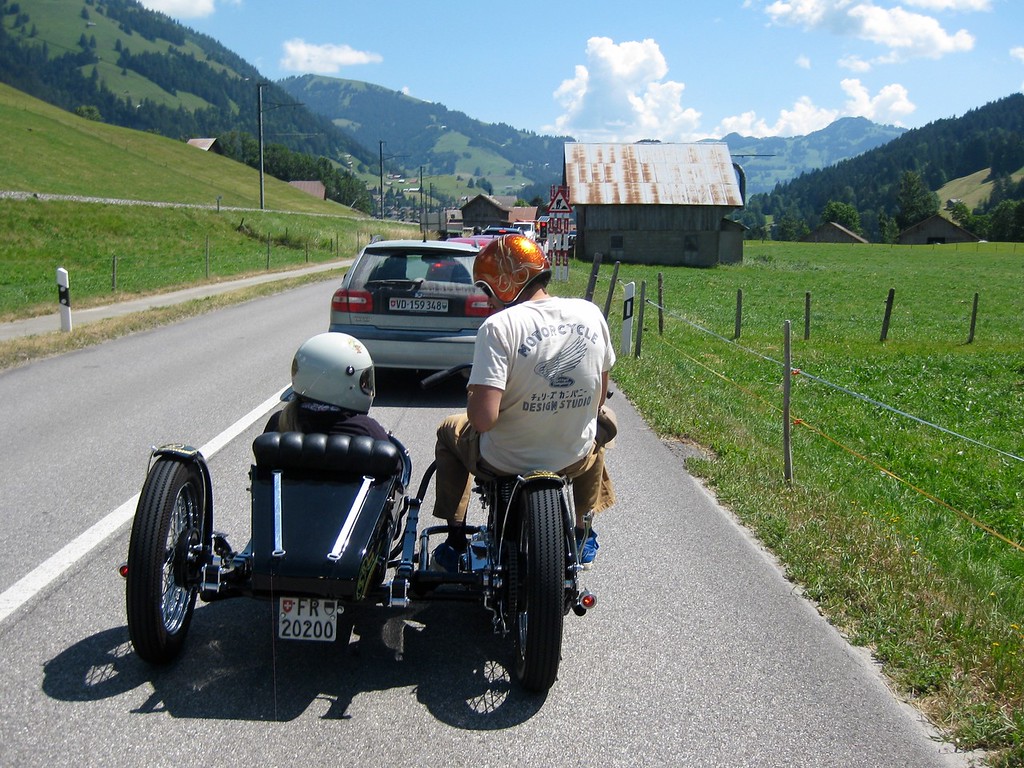 Someone on one of the motorcycle forums had mentioned some lesser-known roads in the Alps. I was going to explore one of them now, not knowing what to expect at all.

What I didn’t expect was the 5 CHF gate fee to access this semi-private road. I debated on whether or not I should do it, but I figured what the heck, I have a job now; I can afford 5 CHF! So I dropped my coin into the slot, the gate raised and I continued on.

I had the road to myself (mostly) which was a good thing, since it was so narrow.

At the end of the road was a lake and a restaurant – a perfect combination. I parked the bike and found a table with a view.

The beer-battered perch was excellent and I enjoyed the sights and sounds of this remote alpine region. Hikers came and went, SUPs (stand up paddleboard) plied the lake’s smooth surface and kids played on the shoreline; it was a delightful location. 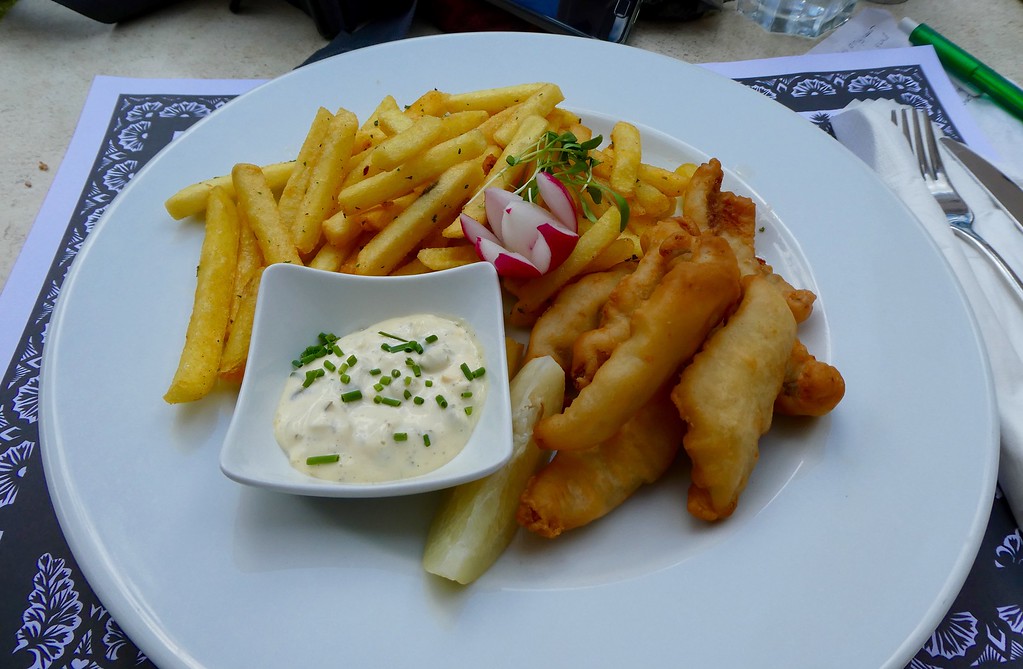 I haven’t seen one of these in a long time!

The return road to “civilization” 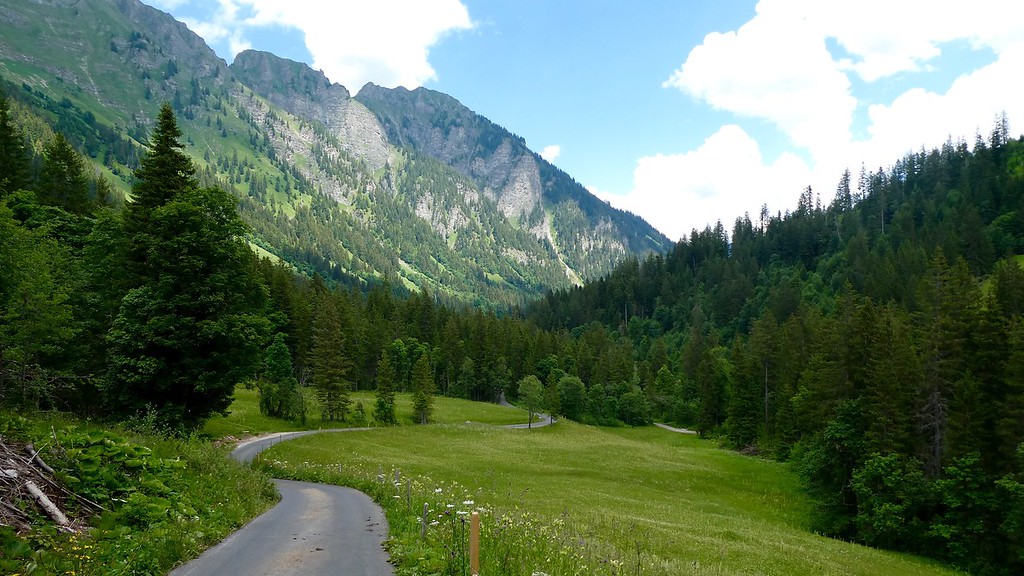 The return road had a detour. I am not sure why, as the road seemed perfectly serviceable. Perhaps it was to alleviate two-way traffic down the narrow, winding road. The detour road was also narrow and winding – and unpaved. 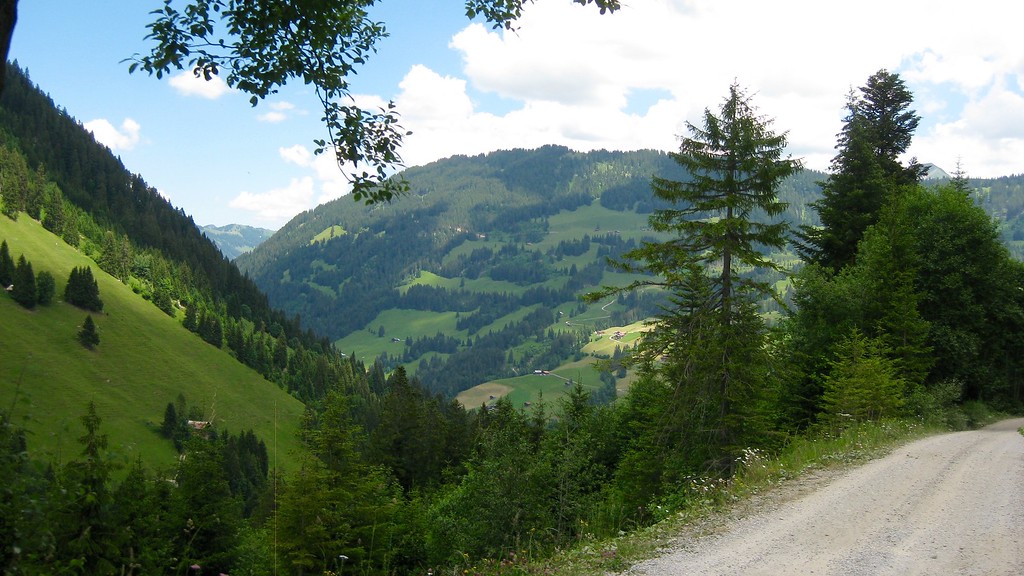 Now that I had reached my half way point, I planned my random return home. I ended up retracing some of my route, which with views like this, was not a problem. 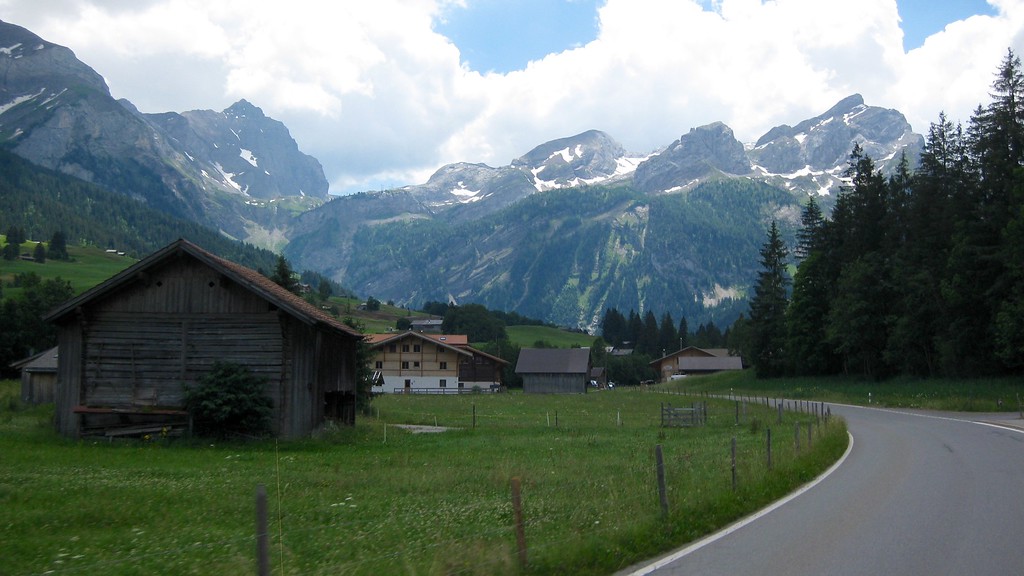 At one point earlier on today’s journey I had an oncoming car flash its lights at me. This rarely happens here, so I proceeded with curiosity and some caution, looking for the reason behind it. After a few minutes of nothing unusual, I shrugged it off – until an oncoming motorcyclist gave me the signal of “police ahead”. Aha, perhaps something really was coming up! I had almost given up on this second warning when I entered the town of Moulins and saw a plethora of police motorcycles in a parking lot and a couple of officers inspecting some vehicles. They were otherwise occupied and didn’t even look up as I passed. Not that my quiet little BMW would ever raise a suspicious eyebrow. 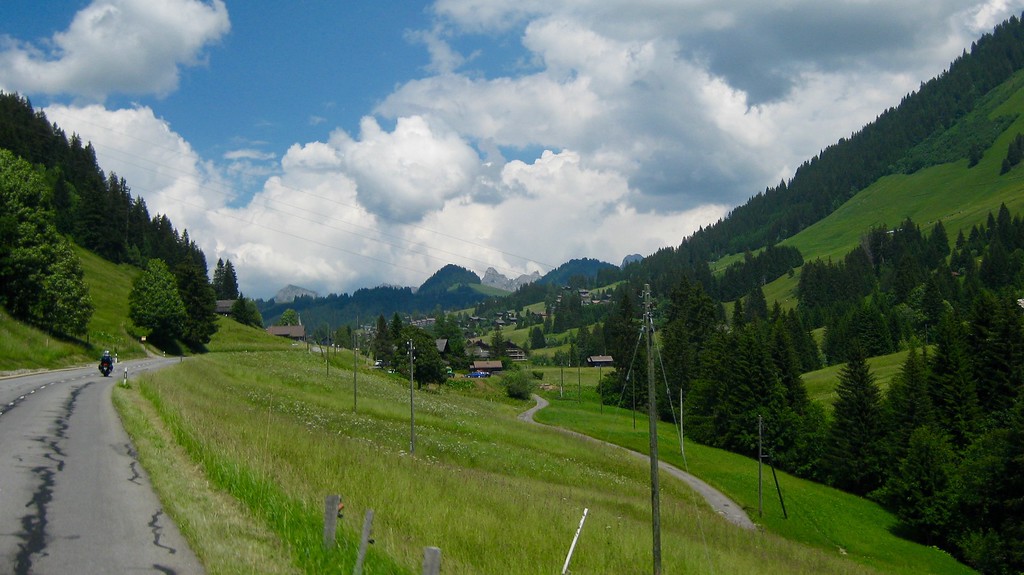 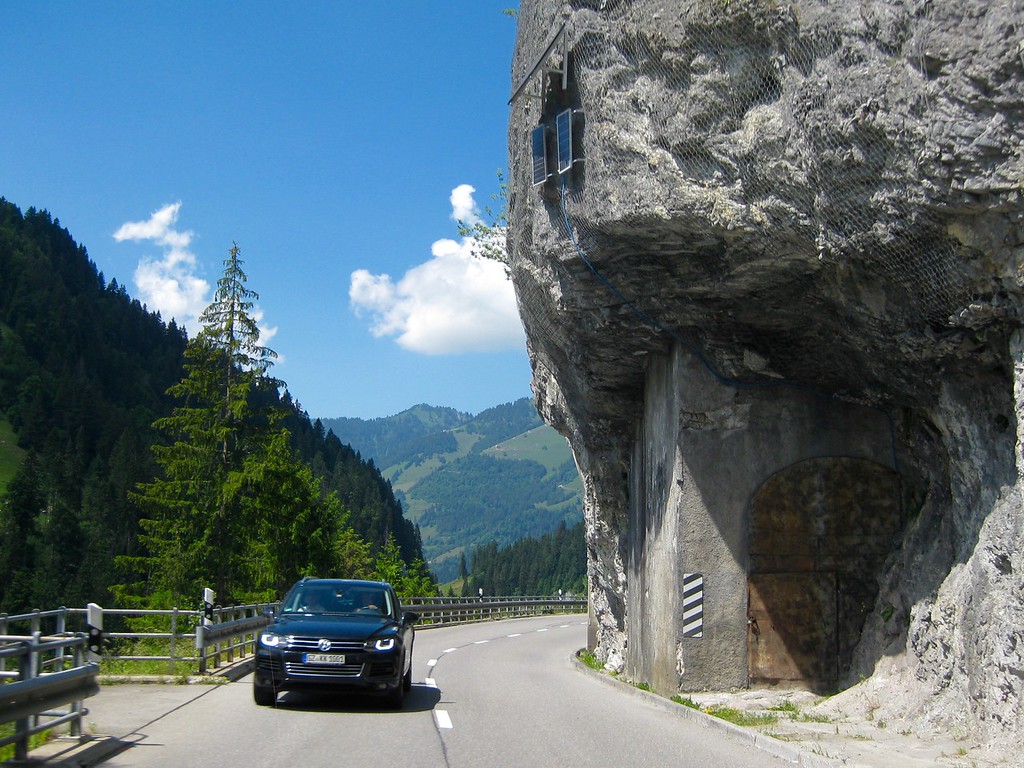 This is how Swiss roads stay nice – they are rebuilt

I saw many, many classic cars on the road today

I was leaving the mountains behind and entering a more agricultural area – perhaps I could find some apricots to bring for Dan? 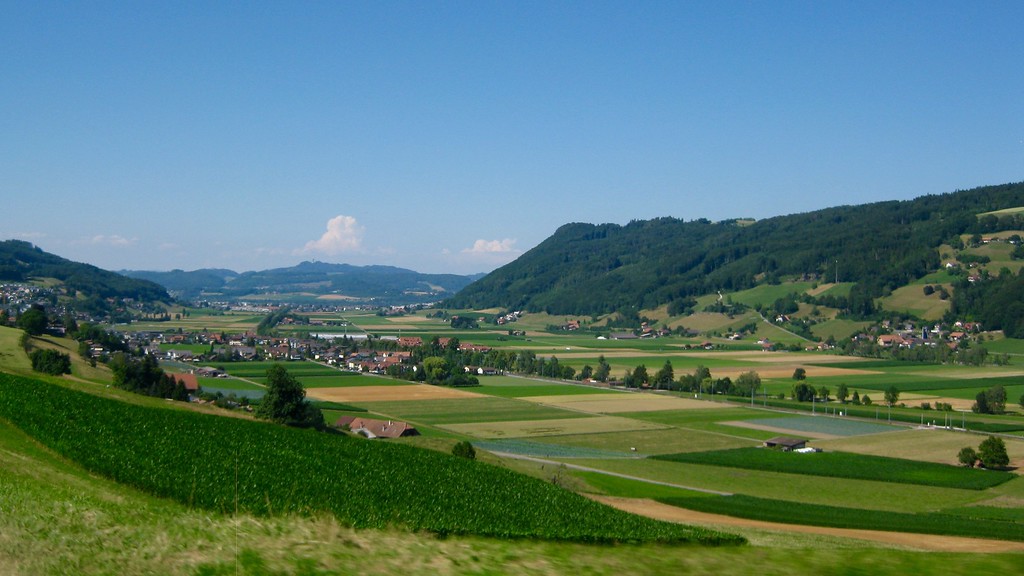 And I did! There was a nice layout of fruits and vegetables in the village of Riggisberg. I stopped and looked them over, picking out some fresh butter beans, tomatoes, apricots and (of course) cherries. With my topcase loaded with the bounty of the countryside, I completed my journey home.