With the incredibly hot summer we had, I didn’t get out to ride as much as I would have liked. Therefore I took advantage of the spectacular fall weather we were having to go for a spin in the Jura. A couple of years ago Dan and I had been exploring the little area of Switzerland where it bulges its way into French territory along the Jura mountains. During that ride we had seen a very large, older building. Later I looked it up and found that it was the Bellelay Abbey. It was also a place that produces the very special Tête de Moine cheese. Generally preferring to have a destination on my rides, I made it a point to visit this cheese abbey and perhaps even check out their cheese museum. I left Dan at home and made my way into the brisk morning air.

For some reason, I had assumed that today would be sunnier and warmer than it was. It wasn’t cold, but it wasn’t exactly comfortable, either. That was one benefit to the tunnel above: it was easily 10 degrees warmer in there than it was outside. Still, it was dry and the colors were probably at their peak. I continue to ride through the French countryside. 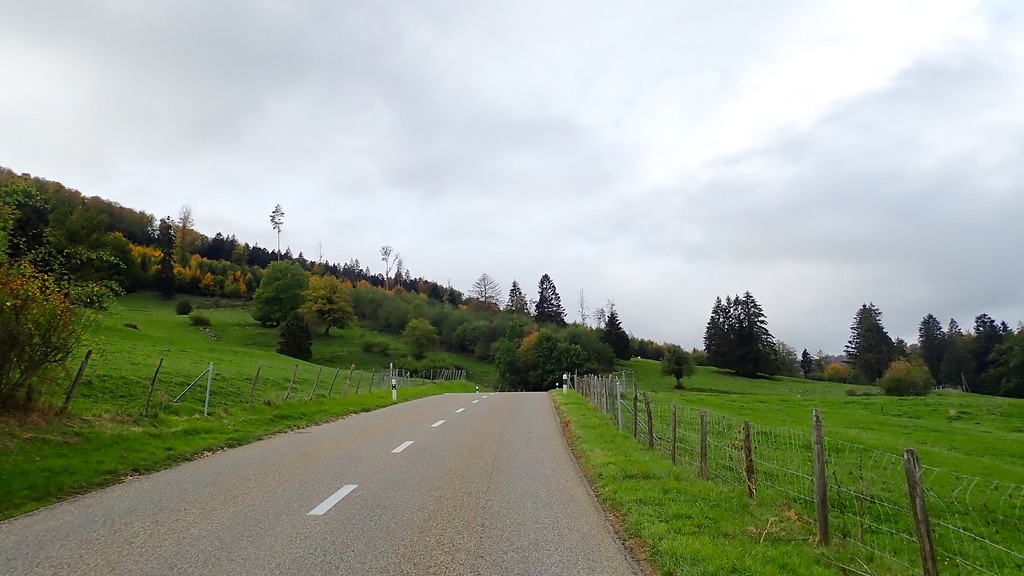 It was a pleasant ride through French farmland

It was just a couple of hours when I found myself suddenly there: the Abbey of Bellelay. I had come out of the forest to be greeting by the same large, white building I remembered from the other ride. Ok, so it wasn’t as white as I remembered it. 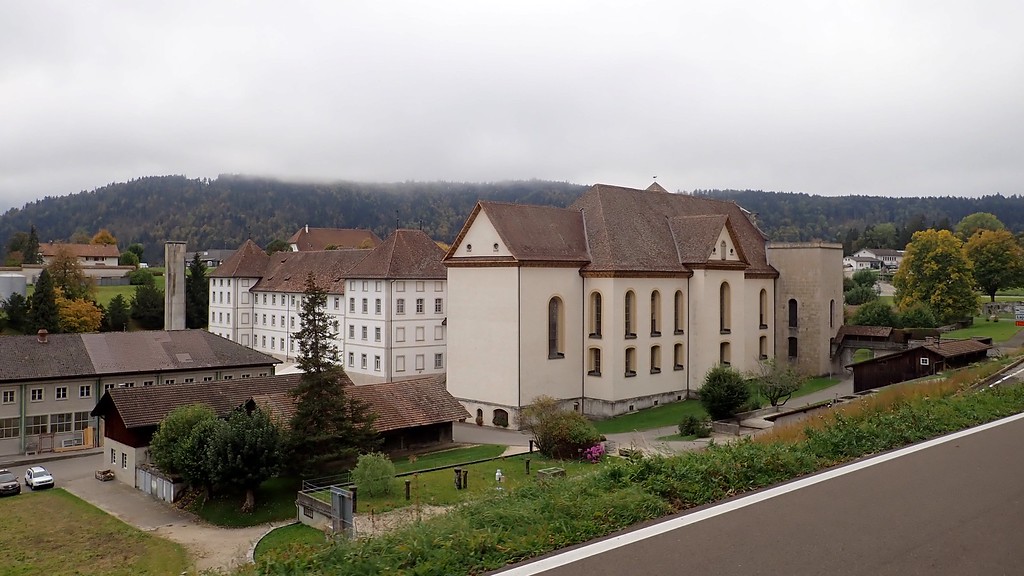 I was really surprised that they would be open on a Sunday, but I guess cheese is one of those daily requirements for a happy life. I parked the bike in the near-empty lot and walked under the impressive gate. 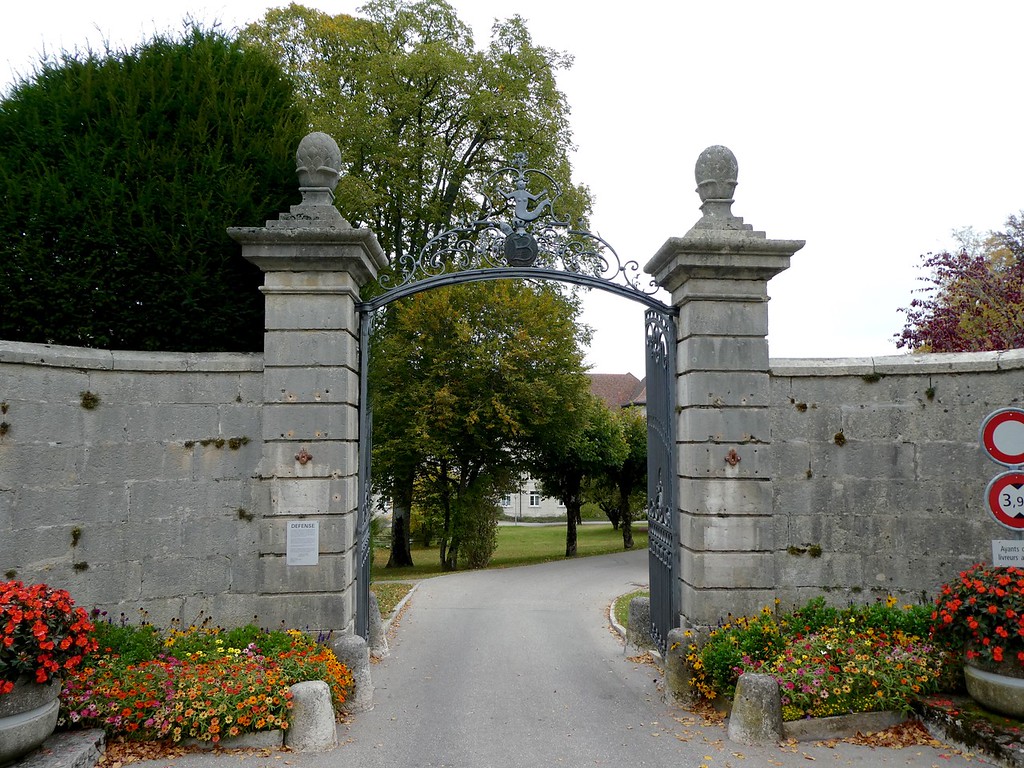 I wandered around, admiring the fading blooms that lined the walls of the 18th century building. Other than a couple of people playing with a dog off to one side, there was no one else around. I found an open door and entered a large, empty space. I was impressed with the sheer lack of anything here. I at least expected to see signs for the cheese museum, or some sort of information about where I was.

Along one side of the room was a row of windows so I went over to see what I could find out. A nice lady behind the reception counter asked if she could help me. Still puzzled and feeling self-conscious that I apparently had no idea where I was, I asked her what this place was. She smiled and said “Its a psychiatric clinic.”

Well, that was a surprise! She printed out a little history blog about the building, most of which came directly from the Wiki page, and gave it to me to read. I thanked her and meandered over towards the door to read it. While it was an interesting blurb about the Abbey, I wish I had known that actual guided tours are offered that go into much more detail. I guess I can always come back! The building had a long and varied history, as most building do that have been around for 500 or so years. And while part of it is currently a psychiatric clinic, there are also wings that are used for concerts and art exhibitions. I should really learn to do some research before I leave home.

Feeling more than a little awkward, I retreated back to my bike and pulled out my phone. This cheese museum had to be somewhere around here. And it was: just a mere 400 meters up the road. And it was technically the “Maison de la Tête de Moine“. I was just happy that I got things sorted out, although I really had been looking forward to seeing more of the big Baroque building.

Hay sculptures in front of the Maison de Cheese

From the Maison’s website: “Exhibition of giant hay sculptures (4 May to 28 October 2018) – Come and see some enormous sculptures made from hay! Up to 7m high and 8m long, these giants took 12 sculptors from all over Europe more than a week to make.

Six teams of two sculptors worked their very hardest to create animals and characters from the home of Tête de Moine. Each team brought its own interpretation of the area and its traditions. The magical decor which is the result will make you wonder where lies the boundary between legend and history.”

Looks like I was just in time to see the artwork before they were taken down for the year. It was pretty cool to see what people could do with simple hay.

And they were BIG!

Enough of this – it was time to go inside and see what was waiting for me. Cheese, perhaps?

Yes, there was cheese. And people. And tables and chairs. It was like a little store that specialized in cheese and local products only. The museum? It was there, too, but now that I had finally found it, I had somehow lost interest in going in. 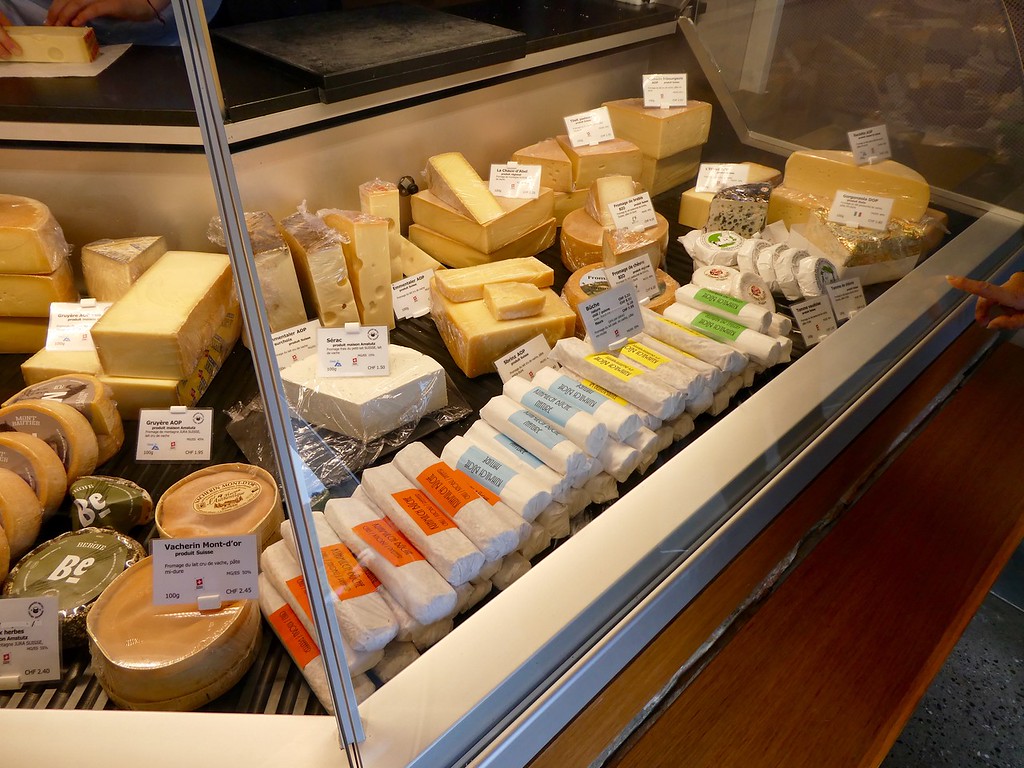 And the famous Tête de Moine still chilling in the cave

There was actually a surprising number of people here, including about twenty motorcyclists parked out front, clearly out to enjoy a group ride on this fantastic day. I decided that I need to enjoy it some more too. I tucked my fresh loaf of bread and chunk of cheese in my top case and set a course for home.

Zipping by the Abbey again

The sun came out to light things up

Little village along the way 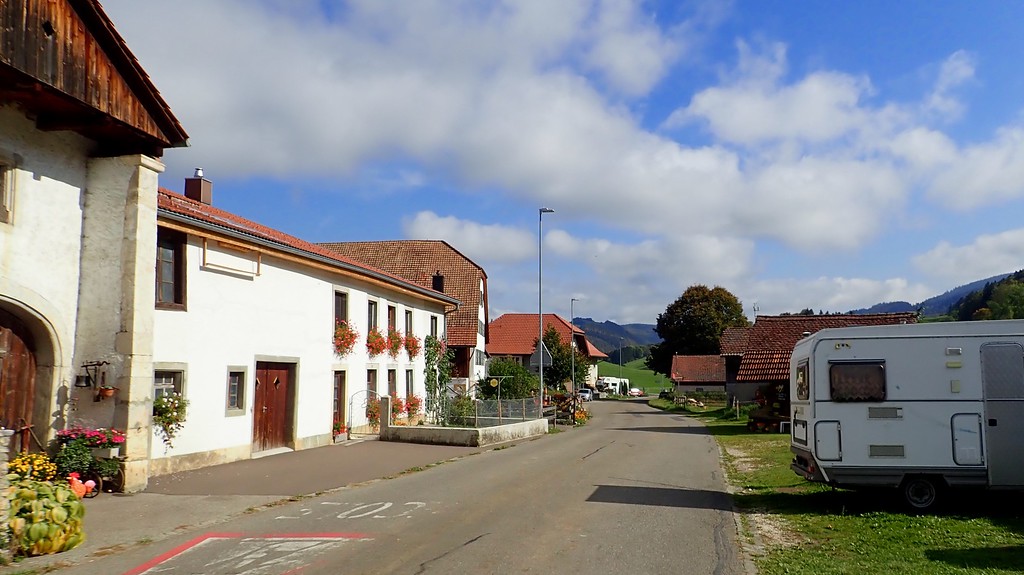 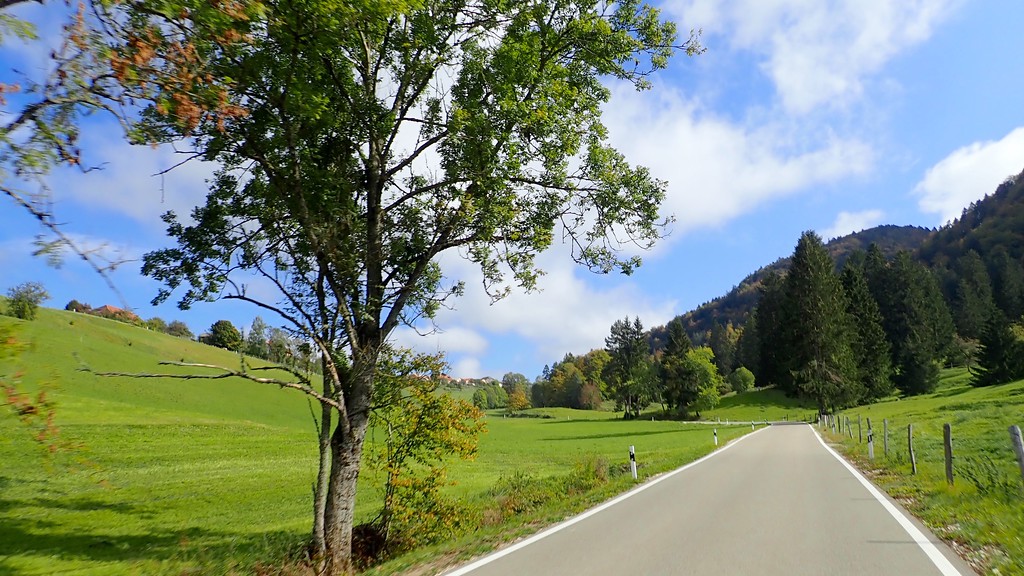 This is about the best that “fall colors” get around here

I love the little kink in the road in the distance

The town of Moutier in the distance 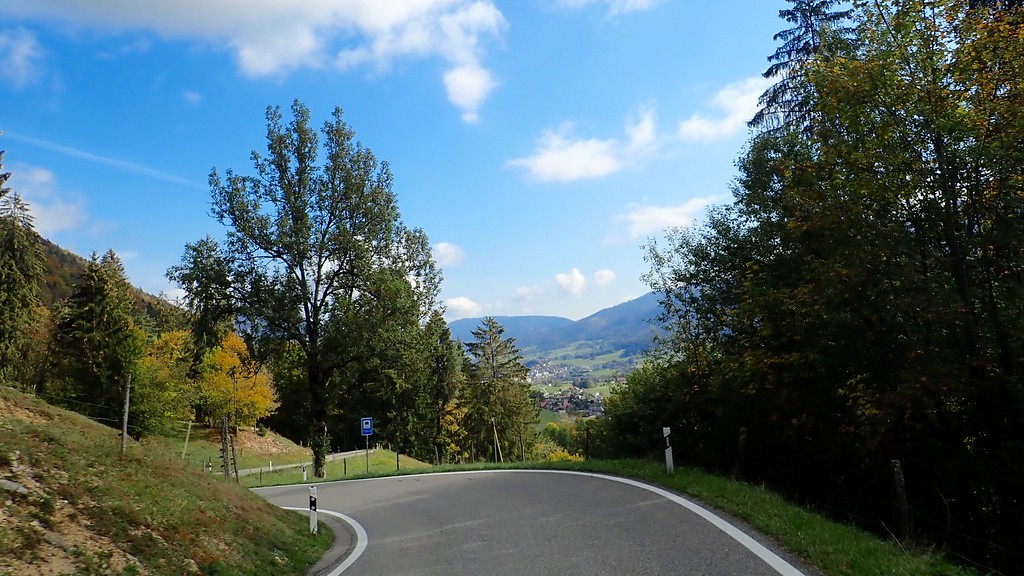 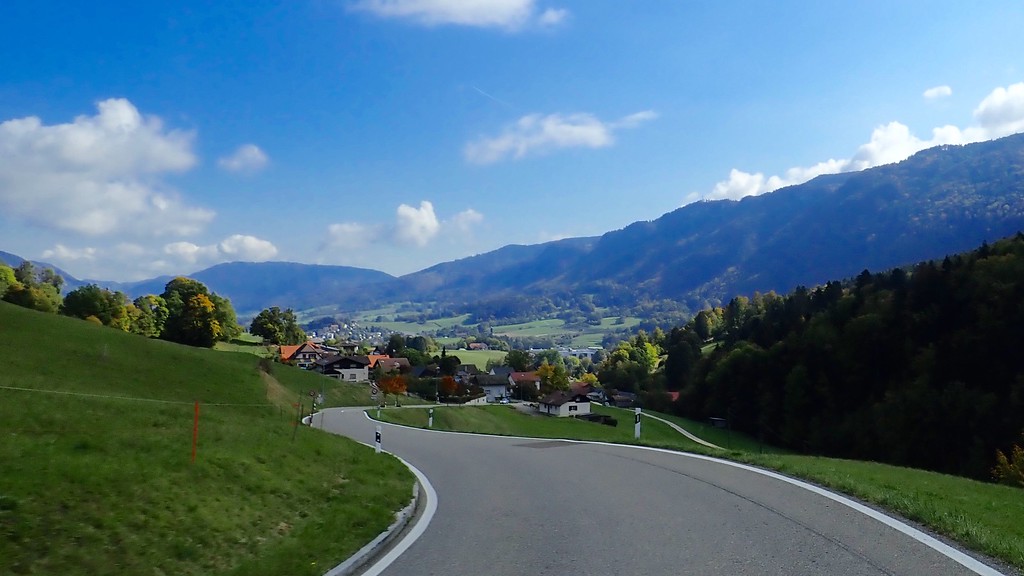 I had actually hoped to take a different route home, but the way was blocked by construction. I was ok with my second choice, as the road between Moutier and Delémont is nestled deep in a gorge, running parallel to train tracks and a small river. When I had come south that morning, I accidentally took “the new road”, that tunnels through the mountains. But now was my chance to ride on the surface and enjoy the sunshine. 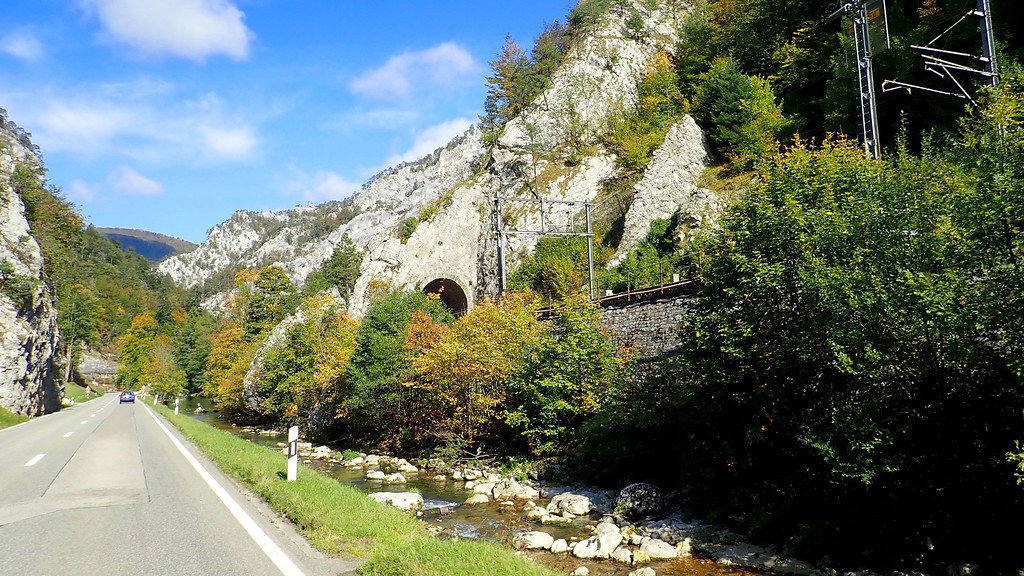 One of many rail tunnels 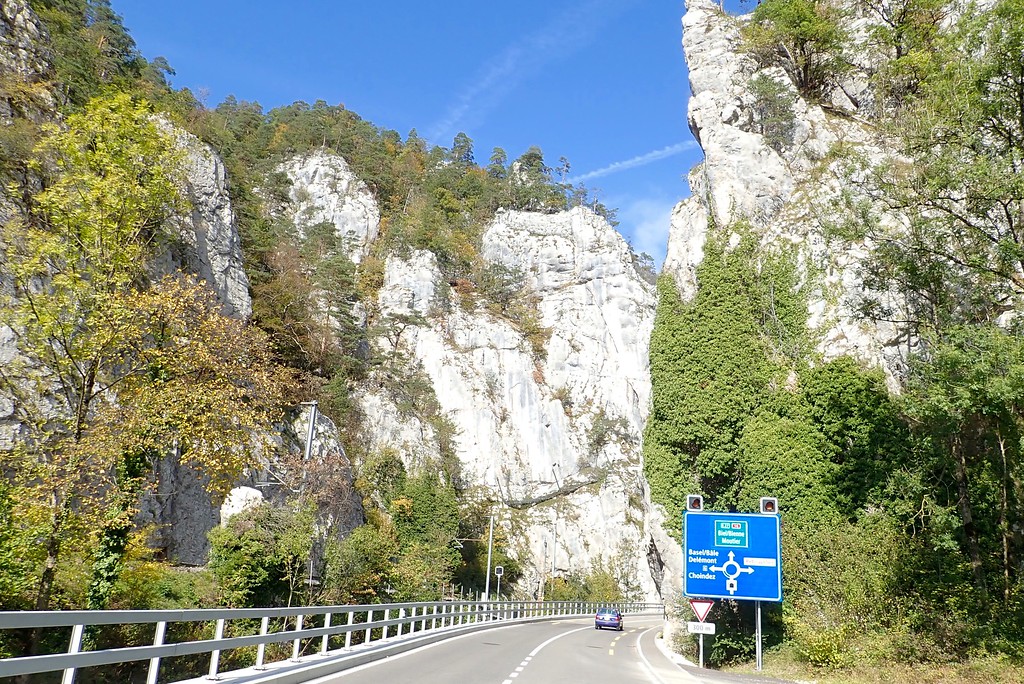 Its hard to avoid the tunnels in Switzerland

In Delémont I saw a train roundhouse – or at least half a round house. I find rail yards fascinating, so I pulled over and wandered through the open gate. No one was around to stop me, so I poked around probably more than I was allowed. 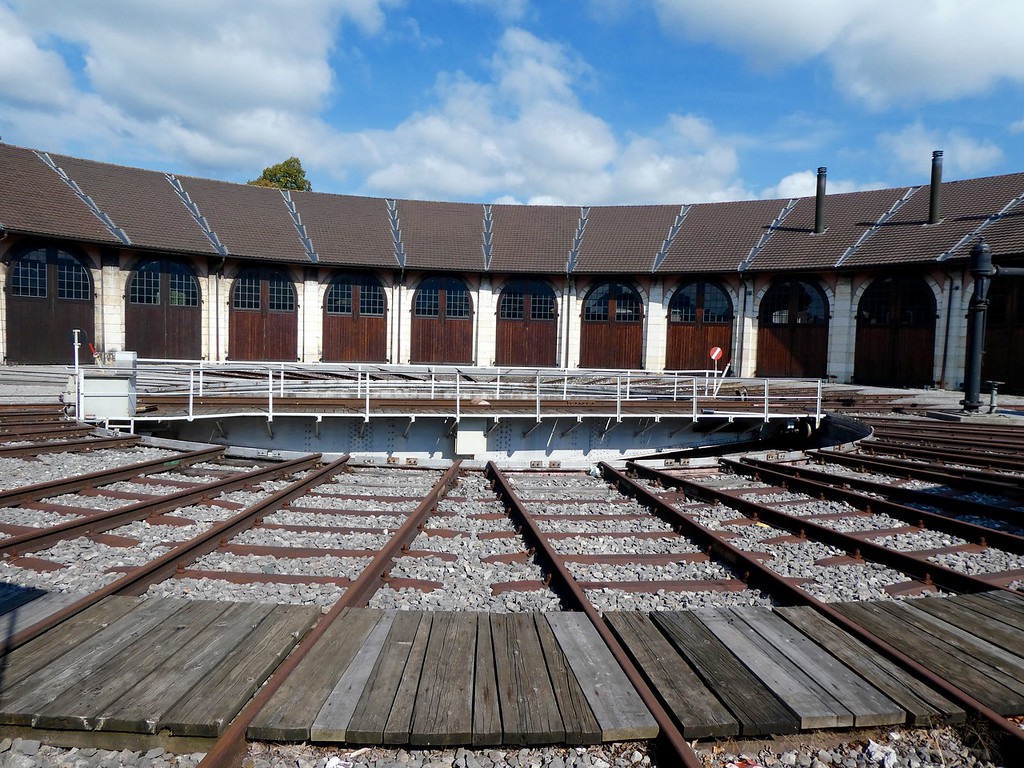 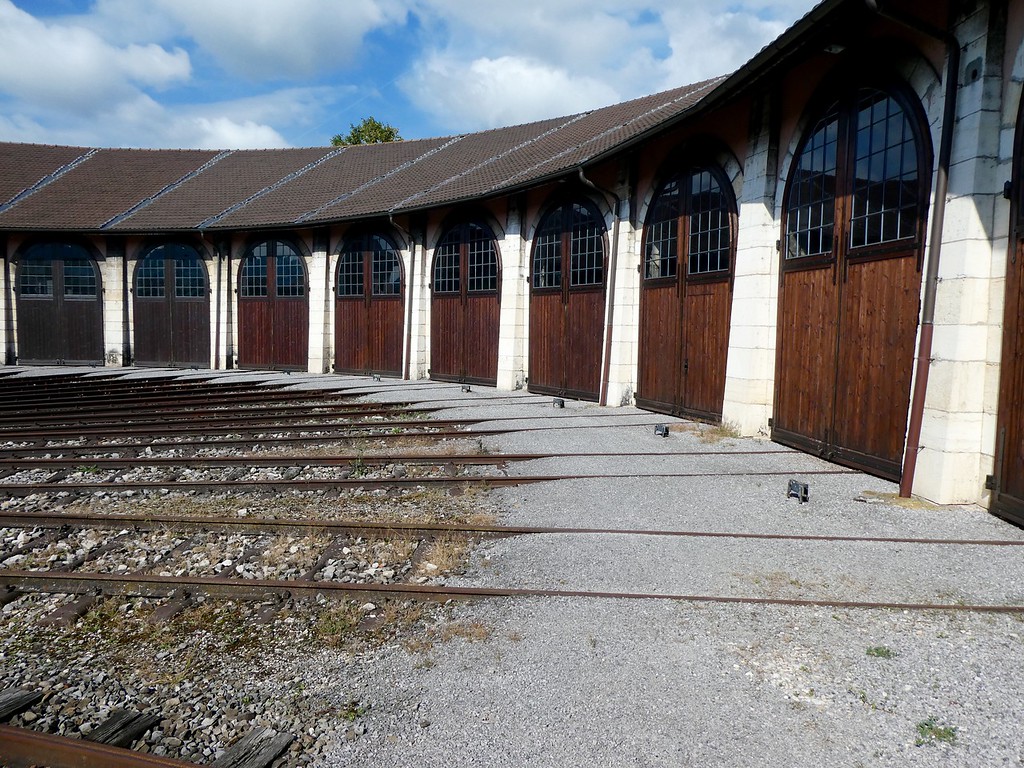 Looking in through one of the windows

I was actually hoping to see some antique carriages inside, but it was still interesting to see. From here on I was back in my neighborhood and it was “just the usual roads home”. 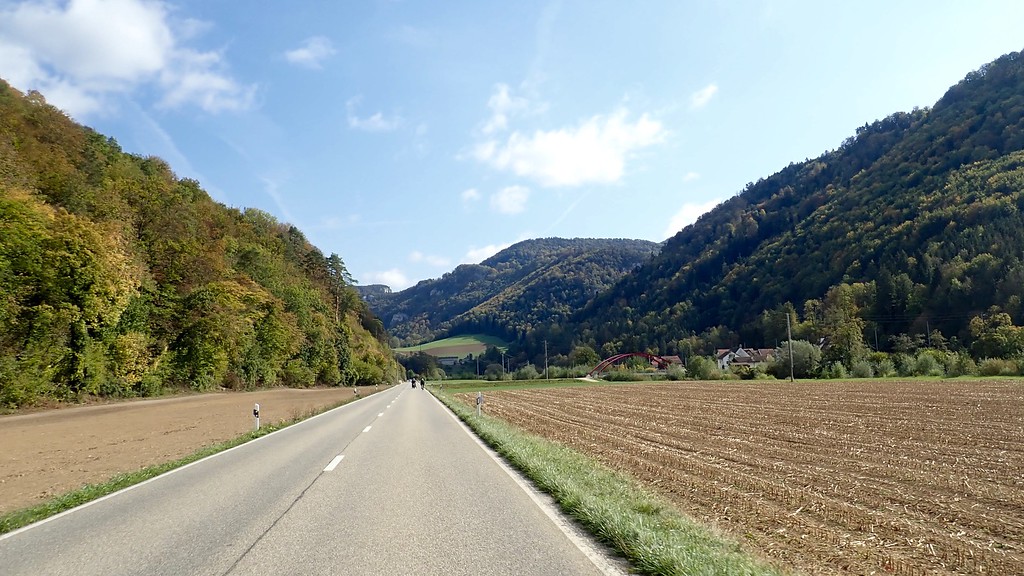 What is it with riders who “dangle” their legs?

And more behind me

And that is how I spent my Sunday…